Bitten on the neck by an Infected (caused)

Private Willimas is a character in Season 1 of AMC's Fear The Walking Dead. He is portrayed by an unidentified actor.

Willimas is a soldier in the National Guard stationed at the medical facility.

When a horde of 2,000 Infected begin overrun the facility at The Military Hospital, Willimas[1] is one of the many soldiers to station themselves at the fence where the infected are piling up. Willimas and the others soldiers unload their ammunition at the infected, however there are too many and The Infected break through. Willimas is the first to be bitten by an infected. The infected latches on to his neck, however Willimas pushes him off and puts him down. As Willimas is bleeding, he applies pressure to his neck and runs to talk briefly with the crew of a helicopter. We don't hear what was said but Willimas then runs head first into the helicopter tail rotor, killing himself and also preventing himself from turning. It is unknown if Willimas was intending to run to the medical bay inside the facility, or went into the rotor on purpose.

Willimas realizing he is infected. 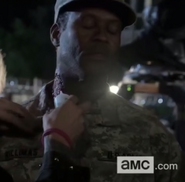 Willimas having blood applies to his neck. (Behind the Scenes)
Add a photo to this gallery

Retrieved from "https://fearthewalkingdead.fandom.com/wiki/Willimas?oldid=27168"
Community content is available under CC-BY-SA unless otherwise noted.