Tobias was a minor character in the first season. He was portrayed by Lincoln A. Castellanos.

A "wise-beyond-his-years" senior at Paul R. Williams High School who understands the seriousness of the situation before anyone around him. He was a victim of bullying[1]at the hands of Dominic Fratto, as (in Pilot) Madison asks if Tobias is having trouble with Dominic again and Tobias replies he isn't, he's helping that student with algebra now. Academically, Tobias seemed to have struggled at school, as Madison talks about him doing better and being on track for college; implying that things weren't always like that and that she's had contact with him before. When Madison drops him back at home she asks if his mother is back and he replies no, but that his uncle is around. This implies that Tobias' home life is somewhat fractured.

Tobias is seen by the Principal, Art Costa, and the Guidance Counselor Madison Clark setting off the metal detector as he enters school. Art stops him from disappearing off into the school and Madison quickly goes through his jacket pockets, right and then left. From the left pocket she pulls some change and holds it up - she's saying that the coins set off the detector but we have seen and heard her put the coins into his jacket pocket, to provide a reason why the detector would have gone off. Madison shepherds the resentful looking Tobias into her office. Once safely in the office Madison asks for the knife that she's already found in his right-hand jacket pocket. She has covered for him. He would have been expelled if Art or the security staff had found it.

Madison probes a little, to find out what's happening that's made him want to carry a knife. When Madison warns he could be expelled and risk his future at college Tobias replies “No one’s going to college. No one’s doing anything they think they are.” Madison asks what he’s talking about and Tobias tells about the news reports of a virus (or something) spreading in five other states, of people killing. Madison tells him to spend less time online; he doesn't get his knife back and leaves the change Madison planted in his pocket on the table as he goes.

Tobia finds Madison forcing open the drugs cabinet in the medical room at Paul R. Williams High School she’s brought a small crowbar with her, and she's taking drugs for her son Nick.

She’s startled, badly scared by Tobias coming in behind her, he asks for his knife back. Madison and Tobias pick up his knife from her office, she tells him to be careful and gives it back to him.

Tobias leads Madison to the school kitchens and they collect food for him on a small trolley. Tobias talks as if he knows exactly what’s happening, he's clearly thought everything through very carefully. He asks if she’s seen any of “them” yet. She lies and says no. Tobias is still talking sense as they are making their way out. They drop off the keys and hear hoarse breathing on the classroom monitoring equipment and Tobias says “that’s one of them”.

The metal detector on the main entrance goes off and that prompts them to rush for the exit.

They enter the hallway by the stairs and Maddy sees Arty through the far doors, she calls out to him. Tobias backs off but can’t get through the doors. Arty walks towards Maddy - she wants to help and tries to fend him off.

Art attacks and Tobias defends Miss C, he pushes Art away and stabs him in the chest with his knife. He goes for Arty’s head but loses his weapon, they rolls down the stairs with Arty still trying to bite him. Maddy hits Arty on the head with a fire extinguisher - repeatedly - until Arty stops attacking Tobias.

As Maddy and Tobias are walking outside the school, it’s calm but they don’t have the food with them. As they walk along Maddy is looking all around them. The school is deserted but normal apart from that. Maddy is unnaturally calm; they get in her car.

Maddy drops Tobias off at his home, they talk a little as he gets out and Maddy is obviously worried but stops short of insisting that Tobias come with her. Tobias goes inside.

Tobias and Madison have a good relationship, as she rescues him from being expelled for bringing a knife into school and has had contact with him in her role as Guidance Counselor. His Mom... Elusive information from Madison when she asks tobias if his mother is "back" and he says no. 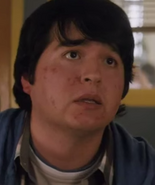 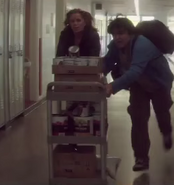 Hurrying down the corridor with Tobias' food

Tobias chats with the principal, one final time

Madison tries to help Art; she doesn't realise the danger she's in

"The government would tell us!"]]

Can I have my knife back now?]]