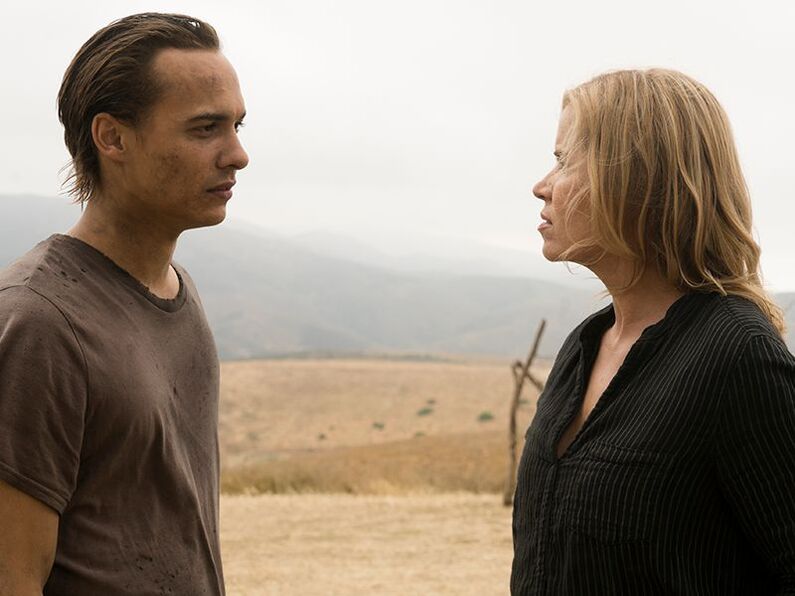 "This Land is Your Land" is the thirteenth episode of the third season of Fear the Walking Dead. It aired on 24th September 2017 on AMC.

In the pantry, Alicia spots Blake stealthily examining a bite wound on his stomach.

Ofelia informs Alicia that the pantry's air vent is broken. They realize they will run out of air if they don’t fix the fan.

Troy begins digging a grave for Jake, Nick tells him to stop and help save the ranch.

Blake estimates it will take at least an hour each way to crawl through the air shaft and clear the blocked fan. Alicia calculates that they have two hours before the carbon dioxide kills everyone in the pantry. She suggests they reduce the amount of carbon dioxide by killing bitten survivors. Crazy Dog wants top strip-search the terrified ranchers and Nation members to find out who has been bitten, but Ofelia and Alicia worry that the people won't react well to force.

So Alicia calmly announces that the air vent is broken, and asks people who have been bitten to step forward for euthenasia to help conserve air. No one volunteers until Blake reveals his wound, prompting more people to step forward.

Nick and Troy devise a plan to direct the herd away from the pantry by blowing up the fuel reserve. They get in the truck and head toward the ranch.

Ofelia and Crazy Dog climb into the air shaft and start towards where they think the blockage will be.

Alicia and Blake inform the survivors who have been bitten that they will get a large dose of morphine to knock them unconscious before they die. The survivors start to rethink their decision. Christine, one of the ranchers, insists that morphine will ease their death. Eventually, a man from the Nation offers to go first.

He lies lies on the floor in another room while Alicia injects morphine into his arm. Then, with Blake's help, she drives a knife through his head.

Overwhelmed, Alicia leaves the room and cries. Christine urges her to remain calm for the sake of the victims.

Outside, Nick fires a grenade to lure Infected away from their path to the fuel. He and Troy race toward the fuel reserve in their truck but, with the windscreen covered in blood and Troy driving too fast, they crash into an RV, attracting Infected. They run to the chopper and get inside. Troy laughs maniacally as the Infected surround the helicopter.

Blake tells Alicia it’s time for his own death. He cries and apologizes for all the people he killed with Troy. Alicia injects him with morphine.

Alicia returns to the main room. Everyone stares at her in silence.

Ofelia and Crazy Dog crawl through the shaft. Ofelia tells Crazy Dog to turn feet first so that they can lower themselves down a drop. Crazy Dog gets stuck and starts to hyperventilate.

Alicia and Christine rest in the pantry. Christine tells Alicia that she regrets hiding from the world on the ranch during her last years prior to the apocalypse. She urges Alicia never to make decisions based on fear.

Crazy Dog explains to Ofelia that he has suffered from PTSD ever since fighting in Iraq. They take a few moments for Crazy Dog to recuperate.

Alicia and Christine share some of their favorite memories. Alicia describes a memory about Nick and says that she used to look up to Nick. She starts to nod off then realizes that Christine and everyone else in the pantry is either unconscious or dead. The air has nearly run out.

Nick turns on the helicopter rotors to try and kill some of the Infected. This works, but the remaining Infected then break through the glass of door and start to force their way in.

Alicia wakes up and sees an Infected eating a corpse. The Infected woman attacks her. Alicia stabs the woman and then passes out. More survivors turn while she is unconscious.

Ofelia and Crazy Dog arrive at the fan and find an Infected lodged in the blades. Crazy Dog hoists Ofelia up so that she can kill the Infected. Crazy Dog passes out. They all, including the Infected man, fall to the ground. Ofelia shoots the Infected. The fan starts whirring, pushing air through the shaft and into the pantry.

Revived by the fresh air, Alicia wakes up and starts fighting Infected. She drags Christine into the armory and closes the gate. She grabs a gun and starts firing at Infected.

Troy offers Nick a gun to kill himself as Infected overrun the chopper. They're interrupted by a loud blast.

Alicia hears the explosion. She continues shooting the Infected, advancing through the armoury door then putting them down with her knife when she runs out of ammunition. She fights hard but it will be a matter of a minutes, at best, before she is overwhelmed. The doors open and Madison runs in with Strand, Walker, Nick and Troy. Alicia tries to rouse Christine and realises she's dead, she makes sure Christine doesn't turn by stabbing her in the head.

Alicia catches up on sleep in the water tanker.

Madison gazes upon the decimated ranch. She tells Nick that they are driving to the trading post and then to the dam.

Madison reveals to Ofelia that Daniel is alive. Ofelia is devastated.

Alicia realises that Jake isn't with them and asks where he is; Nick tells her that Jake is dead, killed by a horde. Alicia asks where the horde came from. Nick covers for Troy, saying that Troy spotted the mass of Infected but was too late in warning them.

Alicia tells Madison that she wants to find a way to live for herself that doesn't involve running from place to place in fear. She reveals a plan to live alone in the cabin that Jake told her about.

Alicia leaves in a truck. Nick tells Madison he will meet her at the dam after he follows Alicia to make sure she reaches her destination safely. Madison tells him to take Troy.

Alicia drives across the plain with Nick and Troy following her at a distance. Madison's group leaves in the water tanker, Ofelia and Crazy Dog sitting on the back.

The gallery below is automatically generated and contains images in the category "Images from This Land is Your Land". Images added to that category turn up in the gallery after a short time.

The gallery below is automatically generated and contains images in the categories "Images from This Land is Your Land" and "Images from behind the scenes". Images added to these categories turn up in the gallery after a short time.

Retrieved from "https://fearthewalkingdead.fandom.com/wiki/This_Land_is_Your_Land?oldid=27157"
Community content is available under CC-BY-SA unless otherwise noted.