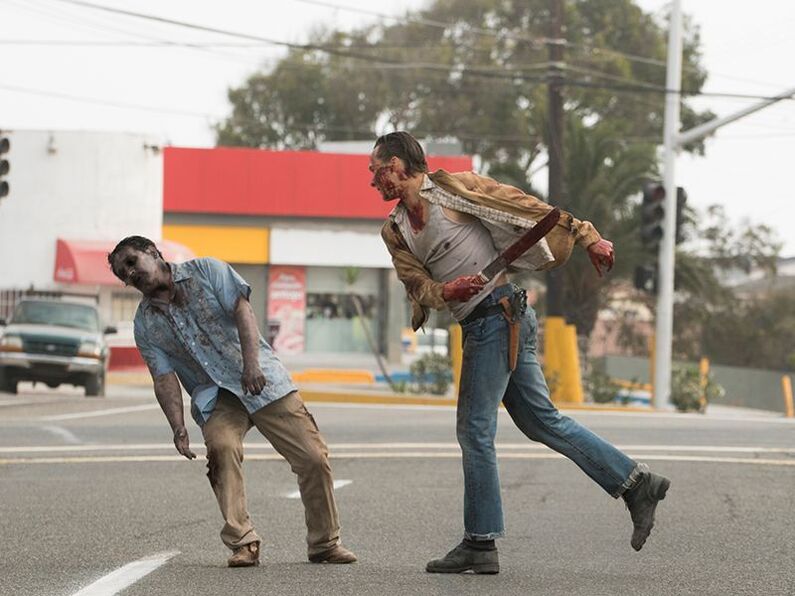 "Things Bad Begun" is the fifteenth episode of the Third season of Fear the Walking Dead. It aired on 15th October 2017 on AMC.

Nick slaughters Infected in the streets and collects their heads in a shopping cart.

Back at El Bazar, Nick tries to sells the heads to El Matarife, who removes the locus coeruleus glands from each head to sell to The Proctors. He only wants the heads of the freshly dead.

The Proctors eat the harvested organs to help them fight longer and harder. He says that they are gearing up for "something big".

Troy sees the Proctors mobilizing and asks one of the men what's happening.

Troy tracks down Nick at a bar and tells him that Madison is in trouble.

Strand joins Madison at the dam and tries to comfort her about Alicia and Nick's departures. He offers her some scotch.

Alicia and Diana drive to the trading post to sell Infected body parts. Bandits crash into their car and try to steal their goods. Alicia and Diana fight them. Alicia scares them off with a rifle and finds Diana has a broken leg.

Walker gives Ofelia's rosary to Daniel. They both express a desire to know what happened in the final hours at the ranch.

Madison and Strand drink heavily together.

Strand tells Madison that he's never killed a living person and Madison replies that it's just a matter of time. Daniel informs her that Nick has arrived at the dam.

Nick and Troy relay what they learned at the Bazar to Madison, Strand, Daniel, Lola and Efrain: The Proctors are planning to raid the dam.

Efrain proposes using C-4 explosives to blow up the dam and release the water to the people. Daniel suggests they post guards at the dam’s entryways and use the explosives as a bargaining chip, threatening to blow up the dam if the Proctors don't negotiate with them. Strand urges Madison to leave with Nick, but she insists on staying to help. Troy volunteers to help set up the explosives.

Nick insists Madison leave the dam before the Proctors show up. She admonishes Nick for using again and orders him to eat some food.

Walker and Crazy Dog pack their bags. Walker informs Madison that they're heading north to search for members of their tribe. Madison shakes their hands.

Alicia stands by Diana's side as Eddie, who used to be a doctor, sets her leg in a cast. Eddie commends Alicia's medical skills and asks for her assistance in an upcoming surgery.

Nick forces Strand to confess that he made a deal with Proctor John to facilitate a takeover of the dam in exchange for a role as steward of the dam. Strand explains that Proctor John agreed to spare Madison and Nick as part of the deal but worries that once Daniel and Lola resist the attack, the deal will no longer be honoured by the Proctors.

Daniel corners Nick and demands to know how the horde found the ranch. Nick insists he and Troy tried to redirect the Infected after spotting them on the outskirts. Daniel senses Nick is lying and locks the door to the room.

Madison and Troy set up explosives under the dam. Madison thanks Troy for looking after Nick. Troy switches on the receiver and hands it to Madison.

Daniel interrogates Nick and again demands to know who led the horde to the ranch. Nick covers for Troy.

Eddie introduces Alicia to Proctor John, who is bound to a wheelchair. Proctor John details his plan to expand his drug empire but explains that the growth on his spine, which causes paralysis, has hindered his plans. He orders Alicia to assist Eddie, who will be operating to remove the growth. He warns her that his brothers will kill everyone in the room if the surgery fails.

Daniel continues to interrogate Nick. Nick finally says that Jake led the herd to the ranch after learning that Nick killed his father. Daniel releases Nick.

Eddie begins the surgery and slices into Proctor John's back. Alicia distracts him by holding his hand and asking about his family. Proctor John screams.

Daniel notices dam water pumping in the wrong direction. Strand assures him that Lola has it under control.

Nick tells Madison and Troy that Strand sold them out to the Proctors. Madison insists on warning Daniel and Lola, but Nick says that Daniel will kill Troy if he sees him. Madison presses Nick for an explanation. Troy admits that he led the horde to the ranch. Madison punches Troy and fatally slams his head with a hammer. She takes the detonator.

Eddie finishes the surgery. Alicia breathes a sigh of relief when Proctor John demonstrates movement in his toes. A soldier informs Proctor John that his men are about to enter the tunnel pipes. Proctor John orders Alicia to join his crew.

Daniel and Lola rush to the pump room to determine why the dam water is flowing the wrong way. Strand holds them at gunpoint and reveals his deal with the Proctors. Daniel lunges at Strand and gets shot in the chin while trying to grab the gun. Lola helps Daniel to his feet.

The Proctors infiltrate the dam through the unguarded tunnels. Daniel's men ambush the Proctors. Gunfire breaks out, killing Efrain. A Proctor brother confronts Strand about the ambush. Strand assures him that Lola and Daniel are dead.

Strand brings Madison and Nick to a remote room and promises to try and keep them safe. He takes the detonator, locks their door and leaves.

The gallery below is automatically generated and contains images in the category "Images from Things Bad Begun". Images added to that category turn up in the gallery after a short time.

Retrieved from "https://fearthewalkingdead.fandom.com/wiki/Things_Bad_Begun?oldid=26752"
Community content is available under CC-BY-SA unless otherwise noted.