The United States of America

Until the end of Season 2, states west of the Continental Divide have fallen, infection rapidly spreading eastward (Eleven States with reported infections at last report). By the middle of Season 3 the country has been completely overrun- this status has been verified by indepdendent sources.

The United States of America is a country in North America. It is the primary setting for all of The Walking Dead, and Season 1 and the first part of Season 2 of Fear the Walking Dead, as well as been the primary setting from mid Season 3 onwards. It is bordered to the north (and the eastern portion of Alaska) by Canada and to the south by Mexico.

Considered to be the only world superpower left after the end of the Cold War, the United States was an economic powerhouse and a world leader in the areas of technology, military strength and entertainment, among many other areas.

From information gleaned from the show, the United States appears to have been the origin for the (eventually global) outbreak, with  zero reports in any other country before the initial outbreak in the U.S.

The first responders to the crisis were local law enforcement agencies such as the LAPD and the California Highway Patrol and field offices of the Center for Disease Control followed by deployment of National Guard Units. However, lack of information about the infection itself and those it affected led to these organizations gradually being overrun.

The leadership of the U.S. Military (and it is assumed, high ranking members of the Federal Government) devised Operation Cobalt in order to contain outbreaks. First, was the establishment of "Safe Zones" within major population centers with a view to use them as  a springboard to reclaim infected territory. The establishment of safe zones was followed by quarantine of suspected infected individuals (and their immediate termination if infected, consumated by incineration of the corpses). If these measures were to fail, then the final step was the large scale shelling of major urban areas to kill the infected. The bombing of Los Angeles was seen in the first episode of Season 2a. The bombing of other areas was confirmed by George Geary.

By the beginning of Season 2a, it is unknown how many states have been infected, with some reports at this point claiming eleven states having declared emergencies.

According to the last broadcast from the Park Ranger at Shuteye Peak, the bombing of major cities has had major ecological consequences. By his estimation, the fires caused by the bombing will wipe out Yosemite and the Sierra Nevada within a week. (Radio Waves podcast).

In the Season 2b episode North, it can be seen that there are still individuals patrolling the boarder with Mexico. Whether they are sanctioned by the government, ordinary citizens concerned about 'immigration' or bandits is unknown.

Part of Season 3 takes place in the U.S. as Nicholas Clark and Ofelia Salazar (as well as Madison and Alicia) have (separately) returned to America and reunited.

Ofelia meet an American survivor in the form of Jeremiah Otto, while Madison Clark meet his son Troy.

At this point, there appears to be no form of governmental control over the south-west United States, lack of federal or state oversight present. Military Installations devoid of uniformed personnel and are occupied by civilians. The Border Patrol have abandoned their positions and taken refugee in a safe location.

According to Valery Stepanovich Vashchenko in the Season 3 episode Children of Wrath, all of the continental U.S. has been overrun.

As of Season 4, it would appear that the entirety of the continental U.S. has been overrun, with the infection having decimated as far east as Texas and Virginia.

Los Angeles, second largest city in the U.S., in flames after the outbreaks. 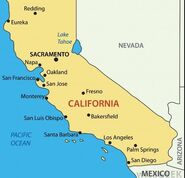 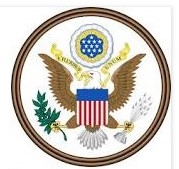 Seal of the United States of America

Nick at the boarder between the U.S. and Mexico

The (slightly tattered) flag flying over the Unnamed Military Camp

Both sides of the U.S. and Mexican border

Add a photo to this gallery
Retrieved from "https://fearthewalkingdead.fandom.com/wiki/The_United_States_of_America?oldid=30745"
Community content is available under CC-BY-SA unless otherwise noted.