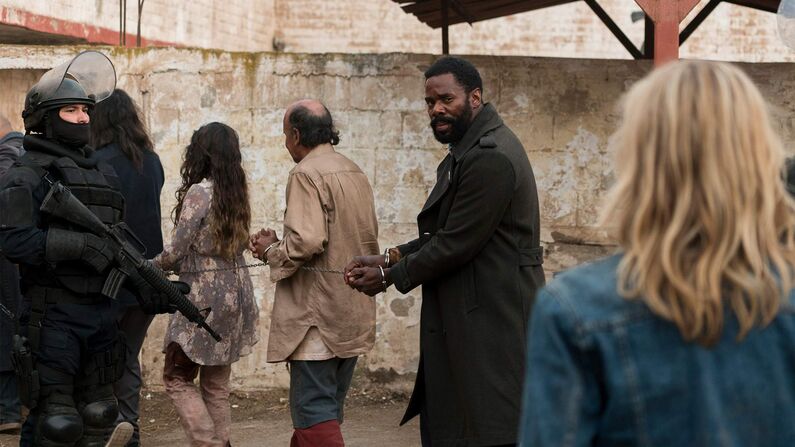 "The Diviner" is the tenth episode of the Third season of Fear the Walking Dead. It aired on 10th September 2017 on AMC.

Nick wilts in the metal outhouse. Through the slot in the door, he can see an Infected Troy walking towards him. Suddenly, Troy falls to the ground, catching himself with a somersault and we realize Troy is not infected. Troy unlocks the hotbox and helps Nick out. Nick finds himself still trapped in the box, he had hallucinated the whole encounter.

Madison and Walker look upon a nearly depleted reservoir. Madison tells Walker that Jeremiah Otto was aware of the low reserves. She insists they keep the water situation a secret in order to maintain peace at the ranch. Walker suggests they buy water from a trading post in Mexicali.

Madison and Walker tell Alicia, Jake, Ofelia, and Crazy Dog that they will be gone for a couple of days to secure a backup water supply. In the meantime, they instruct them to enforce water rationing across the ranch.

When they're alone, Madison reveals to Alicia that they only have six weeks of water left. She urges Alicia to keep the secret, to look after Nick and gives her a radio to stay in touch if things go bad.

Madison stops by the hotbox to give Nick some water. She leaves with Walker in a water tanker.

Crazy Dog releases Nick from the outhouse, warning Nick that he will be watching. Alicia brings Nick back to Otto's house and tells him about the water rationing, she doesn't tell him about the underlying water shortage.

Ranchers complain to Jake about the rationing, the ration doesn't take account of animals such as horses and cattle. Alicia scolds them and urges them to trust Jake.

Madison and Walker make camp for the night. Madison touches base with Alicia over the radio and asks about Nick. Walker tells Madison that she is overprotective.

In the middle of the night, Coop and Blake visit Nick and thank him for helping Troy fight the Nation. They give Nick the last rancher-controlled gun and say that they want to rebuild the militia and fight back.

Ranchers and Nation members line up at the well to collect their rations. Ofelia and Crazy Dog oversee the rationing. Blake tells Nick that he saw one of the Nation women double-dip at the well.

Madison and Walker drive to a large trading post at a sports stadium. Walker takes a canister of gold out of a box.

Madison and Walker surrender their weapons at a checkpoint. Madison reluctantly trades her radio to pay for their admission into the trading post.

Madison and Walker go in, the outpost packed with stalls and customers.

Alicia visits Ofelia and Crazy Dog at the adobe and suggests they devise a system to ensure that no one double-dips from the well. Ofelia refutes the charges of double-dipping and brings up a rumor that the militia is rebuilding. Alicia denies that - and Ofelia tells her to control her own people first, if she really wants peace.

Blake and Coop gather ranchers to form a new militia. Nick warns them against attacking the Nation prematurely but suggests they take action if the Nation pushes any further.

Alicia finds the gun calls Nick an asshole for having it. Nick points out that ranchers are listening to him. Alicia surprised by saying they only trust him because they don't know that he killed Otto and accusing Nick of killing Otto for their mother. Up until then, he wasn't aware that Alicia knew about Otto's death.

Alicia tries to reach Madison over the radio but gets no response.

Madison and Walker approach Maria Lu at the trading post wanting 10,000 gallons of water. Walker presents her with the gold and offers to give her a dozen more canisters. Maria Lu agrees.

Madison spots Strand getting roughed up by a gang of men. She tries to help Strand. Maria Lu sees her and calls off the deal once she realizes that Madison is friends with someone, who is in trouble with Proctor John. Madison attacks the men and flees with Strand and Walker.

Strand leads Madison and Walker to a hideout. Strand tells Madison that he plans to reconnect with a friend who controls a dam near Tijuana, he tries to discourage them from going to the dam. They rest for the night.

The next day, Alicia catches one of the ranchers taking a second term at the well. A Nation member calls the rancher a thief. A fight breaks out. Alicia silences the crowd and reveals that they only have six weeks of water left. Mayhem ensues. Crazy Dog shoots a gun and orders the crowd to back away from the well. Nick guards the well with his gun and is joined by other ranchers. Ofelia convinces Crazy Dog to back off.

Madison catches up with Strand in the hideout. Strand, learning of Travis's death, consoles her. Guards barge in with Walker as their captive. Walker says the guards had threatened to kill them.

A guard tells Madison that Strand must pay off his debt to Proctor by defending the front gate from Infected while chained up. Strand urges Madison to leave him and return to Nick and Alicia.

Alicia watches over the camp as ranchers gather weapons. Through binoculars, she sees Nation members digging a new well.

Walker tells Madison that he salvaged the water deal with Maria Lu and that they will get their water in the morning.

The militia discusses strategies to overtake the Nation. Nick suggests they avoid bloodshed by simply disarming the Nation.

Proctor’s men chain Strand up outside the stadium gate. Strand grabs a hammer as a group of Infected approaches.

The next morning, Walker brings the gold to Maria Lu only to find that all the canisters are empty.

Meanwhile, Proctor's men release Strand from his chains. Madison has paid his debt.

Walker confronts Madison about using his gold to pay off Strand’s debt. She reasons that the water tanker was just a short-term solution and that Strand can lead them to a longer-term solution: a dam.

Nick and the militia sneak up to the adobe with guns. They see Alicia digging a new well with the Nation. Coop tells Nick to remove her from harm’s way.

Inside the adobe, Ofelia and Crazy Dog lie in wait for the militia, ready to counterattack.

Nick gives his gun to Blake and joins Alicia. Crazy Dog and Ofelia leave their weapons behind and go outside.

Nick, Alicia, Ofelia, Crazy Dog and other ranchers and Nation members all join together to dig.

The gallery below is automatically generated and contains images in the category "Images from The Diviner". Images added to that category turn up in the gallery after a short time.

Retrieved from "https://fearthewalkingdead.fandom.com/wiki/The_Diviner?oldid=25905"
Community content is available under CC-BY-SA unless otherwise noted.