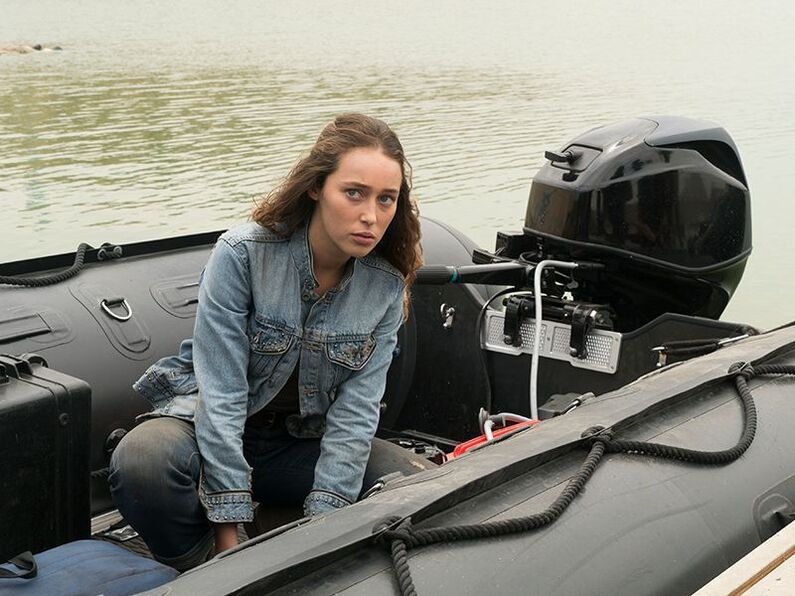 "Sleigh Ride" is the sixteenth episode of the Third season of Fear the Walking Dead. It aired on 15th October 2017 on AMC.

In a fantasy, Madison cooks a Christmas turkey in Jeremiah’s house. She sees a truck approaching the house.

Madison steps outside and joins Nick and Luciana in a cemetery. Luciana holds a baby in her arms. Madison sees Alicia's name on a grave. She tries to follow Nick and Luciana, but they ignore her and drive off.

In reality, Proctor John rides a Zodiac toward the dam with Alicia and his men. They see bodies floating in the water. Strand greets them at the dock and exchanges quick glances with Alicia. John admonishes Strand for the unanticipated resistance from dam guards.

Strand quietly assures Alicia that Madison and Nick are alive and in hiding. He vows to help them escape if she agrees to work with him.

In the locked room, Nick criticizes Madison for killing Troy. He accuses her of secretly wishing he had died during the darker days of his addiction. Madison swears that she never wanted her son dead. Someone knocks on the door as gunfire erupts outside.

Lola applies pressure to Daniel’s gunshot wound and marvels that he's still alive. She leaves him in an underground room while she goes to find Efrain.

Alicia changes John's dressing. John asks how she knows Strand. Alicia admits that Strand helped her family escape L.A. and that Strand and her mother are friends. She asks John to spare Madison. He agrees on the condition that Alicia comes to Houston with him and his crew. She agrees.

Strand checks in on Madison and Nick. Madison holds him at gunpoint but releases him when he reveals that Alicia is at the dam with John. He instructs Madison and Nick to change into worker uniforms so that he can sneak them out. He admits that he shot Daniel but didn’t kill him. Without other options, Madison and Nick reluctantly acquiesce to his plan.

Lola finds Efrain dead in her office and cries. She sees Strand in a security camera feed and strides out of the office with a gun.

The escape is short-lived as Lola attacks the group and guns down several of John's men. John kills her and discovers Strand trying to smuggle Madison and Nick.

Daniel wakes up in the underground room.

Alicia reunites with Madison. One of John's men recognizes Nick from the trading post and recalls that he was with another man. John decides to kill Nick, who he deems untrustworthy, and must therefore also kill Madison and Alicia, knowing they'll seek revenge for Nick's murder.

Madison, Nick and Alicia walk across the dam bridge together. Nick hugs Strand goodbye then gets in position for his execution. Strand tells John that the dam is rigged with explosives and reaches into his pocket to pull out the detonator, but comes up empty. Nick reveals that he took the detonator while hugging Strand.

In the Christmas fantasy, Madison serves turkey to Daniel, Otto, Troy, Jake, Coop and Walker, who are all dressed up. Strand arrives with a stack of presents. Madison removes the lid off the turkey platter and sees Otto’s head. Walker chops off Jake’s arm. Blood covers the table. Strand leaves the party. Madison follows Strand outside and finds a cemetery.

Back at the dam, Nick threatens to detonate the explosives unless John allows Madison, Alicia and Strand to escape. Alicia urges Nick to come with them, but John points out that Nick cannot leave the detonator’s range. Nick calls the negotiations his "suicide note." John agrees to his conditions.

Strand, Madison and Alicia run from the dam.

Strand, Madison and Alicia reach the Zodiac and launch into the water. Meanwhile, John tries to convince Nick to join him. Nick refuses.

The Zodiac motor dies. John realizes that Nick cannot detonate the explosives until his family is out of range of the explosion. His men close in on Nick.

Daniel finds Lola's body on the bridge with a note on her chest. He puts Ofelia's rosary in Lola's hand and strides forward

Strand, Madison and Alicia fix the motor and power ahead.

As the Proctors close in on Nick, a shot rings out. Qaletaqa and Lee snipe at John's men from a hill overlooking the dam.

John accuses Nick of bluffing and orders his men to kill Nick. Walker and Crazy Dog shoot more of his men. Daniel reaches the group and starts shooting. Nick flips the switch and detonates the explosives. The dam breaks apart as John and his men flee.

Walker and Crazy Dog watch Madison, Alicia and Strand struggle to escape the current created by the imploding dam. Unable to do anything to save their friends, they decide to continue north as planned.

Water bursts through the dam.

Daniel reaches Nick. They teeter on the dam bridge as water fills the valley.

In the Christmas fantasy, Madison walks through the cemetery and stops at Otto’s grave. A hand shoots out and pulls her into the grave.

Madison plunges into the water.

In the fantasy, Travis tries to pull Madison out of the grave, but she slips back in.

Madison sinks underwater then opens her eyes. She kicks to the surface and sees bodies all around her. She swims to the shore and sees people flocking there, filling containers with water released from the dam.

1 of 5
Placeholder
Add a photo to this gallery

Retrieved from "https://fearthewalkingdead.fandom.com/wiki/Sleigh_Ride?oldid=30584"
Community content is available under CC-BY-SA unless otherwise noted.