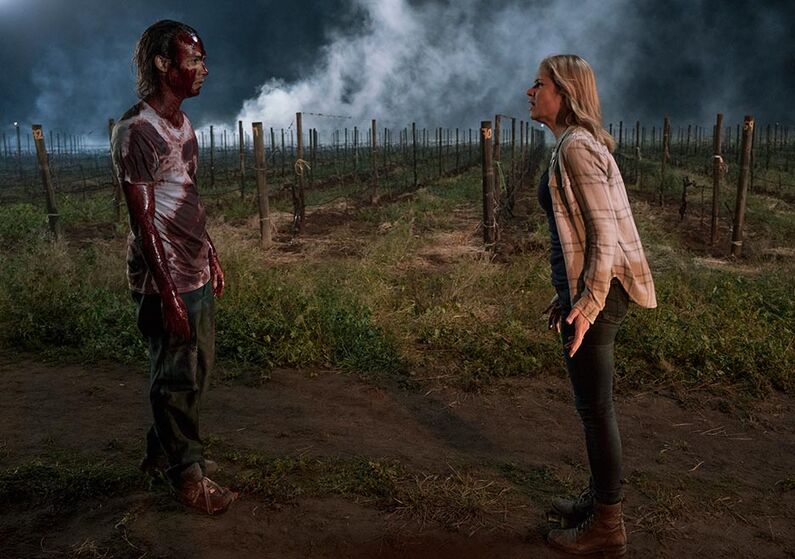 "Shiva" is the seventh episode of the second season of Fear the Walking Dead. It aired on 22 May 2016 on AMC.

"Shiva" is the Season 2 mid-season finale, it's the last episode of Season 2a.

In a flashback, a young Daniel Salazar (10 or 11yo ) standing beside the river, surrounded by dead bodies as he described in Season 1, "Not Fade Away". He hears a man's voice telling him to “Take the gun, Daniel.”

Daniel and Ofelia wake to the sound of a gunshot. Daniel runs outside with Ofelia, she is ill and can't keep up, Daniel asks her what is wrong?. Ofelia starts to peel the skin off of her face. Daniel wakes up: It was a nightmare. But the sound of the gunshot was real, he wakes for real and hears people running in the hall. Daniel immediately looks over to Ofelia's bed but it's empty and he goes looking for her.

Everyone runs to Thomas Abigail’s room, where Strand has just shot Thomas in the head. Celia Flores screams at Strand for shooting Thomas instead of allowing him to turn.

When Daniel finds Ofelia he hugs her fiercely and almost cries in an uncharacteristic show of emotion. Ofelia is surprised and concerned by his behaviour; he touches her cheek where, in his dream, Ofelia had started to peel away the flesh.

Travis asks Alicia to help him find Chris. She refuses, saying that Chris was holding a knife beside her bed.

Celia if grief stricken at the manner of Thomas Abigail' death and forbids Strand from burying him and attacks Strand when he declares that Thomas wasn’t her son. Celia orders Strand and those he brought along with him to leave by the next day.

Travis spots Chris in the vineyard. Chris runs away.

The next day, Daniel secretly sharpens a razor blade and pockets it.

Travis spends all night searching for Chris in the nearby hills. He finds an Infected man that's been stabbed through the head and he retreives the knife. Chris watches Travis from a little way off, Travis doesn't see him.

Madison tells Nick and Alicia to quietly pack supplies so that they can flee to the Abigail and escape Celia’s clutches. Alicia refuses to return to the boat. Nick defends Celia.

Travis follows a trail of Infected bodies killed by Chris. He meets a Mexican man inside a shack and explains that he’s looking for his son. The man tries to send Travis away. Travis tries to walk but collapses, his feet bloody and torn from trekking barefoot all night.

Nick appears leading an infected Luis to Celia after venturing outside the estate, masked by Infected blood. Celia invites Nick to stay at the estate. He convinces her to allow his family to stay with him but she insists that Strand must leave.

Strand digs a grave for Thomas. Daniel urges him not to bury Thomas in such an unholy place. Strand notices Daniel’s unusual behavior and asks what’s wrong with him.

Madison confronts Nick about his fascination with the dead and asks if Celia told him to find Luis. Nick argues that Celia merely wanted her son back then offers to bring Travis back, as well. He tells Madison that the Infected will not touch him. “I will not die,” he declares.

Daniel tells Ofelia that Griselda, his dead wife, is waiting for them at the gate. He grabs her and slashes a man who tries to restrain him. A group of men holds Daniel down.

Madison tells Strand that she’s worried about Nick. Strand is unsurprised that Celia was able to indoctrinate a young and vulnerable addict. He invites Madison to join him on the Abigail but she refuses to leave without Travis.

The man in the shack gives Travis some shoes and tries to shoo him out of the house. Travis sees movement underneath the bedroom door. The man whispers to Travis that Chris threatened to hurt his son if he didn’t make Travis leave. Travis barges into the room and finds Chris holding the man’s son at gunpoint.

Celia delivers a eulogy beside Thomas’s grave. After the ceremony, Celia tells Strand to leave.

Travis knocks the gun out of Chris’s hand and tackles him outside. Chris swipes at Travis with a knife but Travis wrestles the knife from him. “I’m no good,” Chris says.

Celia brings food to Daniel, who is tied up in a storage room, and urges him to seek forgiveness from his Dead. Daniel hears Griselda’s voice. After Celia leaves, Griselda’s ghost appears before him.

Nick finds Travis in the hills. Travis says that Chris needs him and orders Nick to tell Madison that he couldn’t find him. Nick leaves Travis with a knife for protection.

Madison implores Celia to let Strand stay. Celia refuses and tells Madison that she must learn to accept the Infected just like Nick does. Madison asks Celia to help her understand.

Daniel talks to Griselda and reflects on all of the people he’s killed. “What about the one that haunts you now?” Griselda asks. In a flashback, young Daniel looks at the pool of dead bodies and notices one of the men is still alive. A man hands him a gun and tells him to shoot. Daniel complies. “The first victim was you,” Griselda tells Daniel.

Celia takes Madison to the cellar and enters the cell to show Madison all of her infected “children.” Madison closes the gate, locking Celia in.

One of Celia’s workers unties Daniel to give him some food. Daniel attacks the worker and escapes. “I’m waiting for you,” Griselda tells Daniel.

Sofia and the staff escort Strand to the gate. Alicia has followed the group a little way behind and waves goodbye as the gates close.

Daniel pours gasoline in the cellar and lights it on fire. Griselda emerges from the herd of Infected and smiles. The flames lick at Daniel’s feet.

Strand jumps into a pick-up truck.

From outside, Nick sees the estate on fire, all of the main house seems to be burning.

Madison runs into the storage room and sees Jorge on the floor.

Outside, Alicia restrains Ofelia, who is crying for Daniel. “He’s gone,” Alicia says. Strand pulls up in the truck and urges them to get in. Nick walks up to Madison and says he couldn’t find Travis. He suspiciously asks where Celia is but Madison avoids the question. “She was right about us,” he says. “We destroy everything.” Strand forces Madison into the truck as Nick turns his back on her.

From the back of the pickup truck, Alicia Clark watches her brother walking untouched among the Infected. She doesn't call out to him. 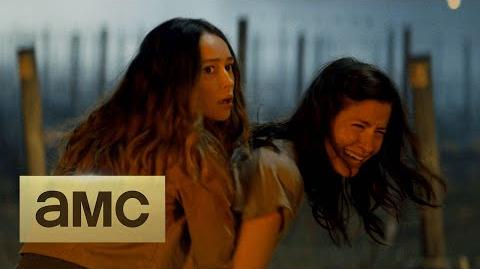 Fear the Walking Dead Next on ‘Shiva’ Episode 207 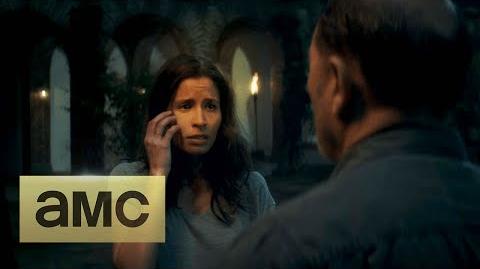 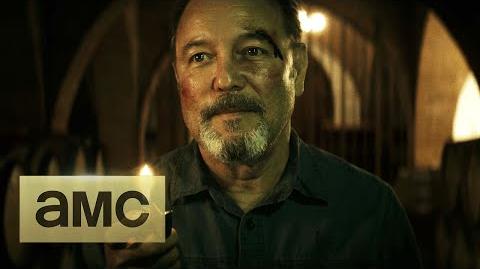 (SPOILERS) Fear the Walking Dead 'Ghosts in the Wine Cellar' Talked About Scene Ep. 207
Add a photo to this gallery

Retrieved from "https://fearthewalkingdead.fandom.com/wiki/Shiva?oldid=29331"
Community content is available under CC-BY-SA unless otherwise noted.