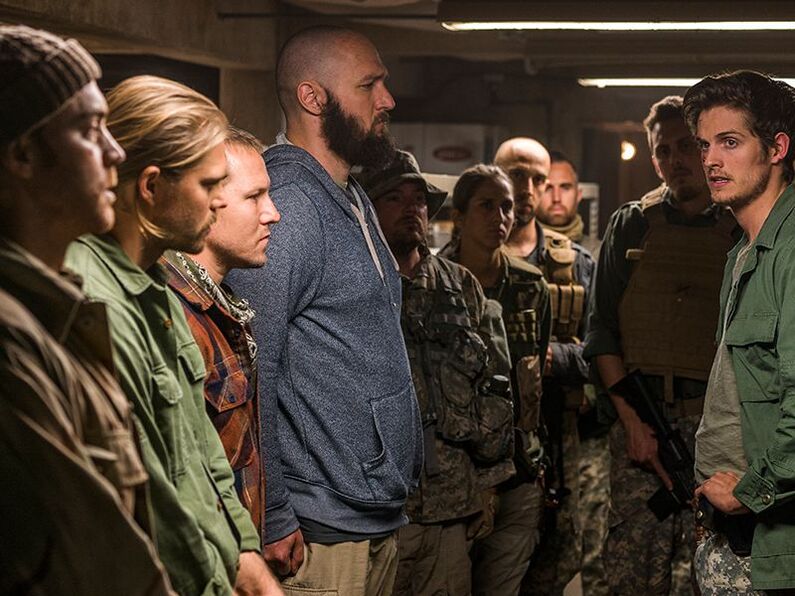 "Red Dirt" is the sixth episode of the Third season of Fear the Walking Dead. It aired on 2th July 2017 on AMC.

Alicia and Jake awake in bed. Alicia worries about Madison's absence and the people who shot down the helicopter.

At Broke Jaw Ranch, Nick and Jeremiah Otto are doing some target practice with the gun Jeremiah gave Nick. Nick also worries about Madison's long absence; as they practise, he spots Troy's team hobbling toward the ranch on the long road to the gate.

Nick, Alicia and other ranchers rush out to help Madison and Troy's team, who all have bloody feet from walking without shoes. Jeremiah wants to keep it low key with a private debrief, but one of the ranchers, Vernon Trimbol, insists Troy's team share their findings with everyone. Mike Trimbol announces that a group of Native Americans slaughtered Phil McCarthy and the others from the outpost. Troy tries to keep everyone calm saying they can handle the situation but Mike blurts out that they're all going to die if they don't leave.

Jeremiah, Troy, Jake and Madison discuss a course of action. Jeremiah is angry and blames Troy and Madison for not being cautious enough. Troy insists they should fight Walker, but Jeremiah believes Walker is bluffing. Jake suggests they negotiate with Walker and points out that he beat Walker in court when Walker filed lawsuits in the past. Madison asks if they stole Walker’s land. Jeremiah maintains that the ranch was sold to his forebears.

Madison rests in the bunkhouse. Nick tells her that Luciana went back south.

Alicia finds Jake practicing his shooting. She asks Jake for advice at target practice. She asks who will take over the ranch after Jeremiah. Jake explains that the ranch will pass to him and Troy when Jeremiah dies but that residents will ultimately look up to whomever they think is worthy. Alicia tells Jake the ranchers would look up to him as a leader if he stepped up.

Back in the Clark's bunkhouse, Gretchen Trimbol tells Madison that her father, Vernon Trimbol, is worried about Walker and wants to take the family to a colony in the Rockies. She says he's telling other ranchers about his plans.

Jeremiah gets out a bottle of liquor at his desk. He walks outside and sees a row of fires surrounding the ranch. Ranch residents come out of their homes and watch the fires blaze.

The next day, Jeremiah maintains that Walker would have burned down the entire ranch if he was serious about attacking them.

The Trimbol family load supplies onto the back of a truck. Troy guards the pantry and forbids residents from leaving the ranch with supplies. The Vernon tells him that they already spoke with Jeremiah.

Troy runs after the Trimbol family's RV and yells at Mike for leaving. Jake stops Troy and they fight. Vernon drives off with his family and his horses.

Troy explains to Madison that Mike was his loyal childhood friend. Madison offers to help him ensure that no one else leaves.

Madison looks on, as Troy gathers a small militia in the pantry and charges them with defending the ranch.

Nick returns to his newly rebuilt home to find Jeremiah drunk. Jeremiah shoots bullets into the floorboards eluding to a past sin, saying that there is blood "in the earth."

Alicia returns to her bunkhouse after spending the night with Jake. Madison questions Alicia about her relationship with Jake, but Alicia assures her that it’s nothing serious and reassures her mother that they are using contraception.

Jeremiah and Nick spot one of Vernon Trimbol's horses in the pasture.

Madison, Nick and Jeremiah leave the ranch on a pickup to search for Vernon's family on the road. Madison reasons that the horse may have escaped on its own but Jeremiah predicts that the Trimbol family is dead.

Jake packs a bag and tells Alicia that he’s going to the Black Hat Reservation to negotiate with Walker. Alicia begs him not to go but he is determined.

Madison, Nick and Jeremiah find the Trimbols' RV in the road, riddled with bullets. They find the Trimbols infected or dead, put down the infected, euthanise the part eaten horse and pile the bodies into their truck. Jeremiah tells Madison that he suspects Troy killed the Trimbols.

Madison, Nick and Jeremiah return to the ranch with the bodies. Madison speaks to the crowd that's gathered to see them return and covers for Troy; she declares that the people who killed Travis and Phil have now killed the Trimbols. She warns that anyone who leaves the ranch will die and urges them to stay together. The crowd murmurs in support.

Ranchers return supplies to the pantry. Nick confronts Madison about lying to the ranch. Madison points out that even if Troy killed the Trimbols, no one would believe them. Nick agrees to keep Madison’s secret as long as she includes him on her plans.

Madison confronts Troy about killing the Trimbols; he admits that he pursued them to confront Mike over abandoning him, and then things "got out of hand". Madison tells Troy he could be the heir to the ranch, but only if he learns to control himself. She says that she hopes Troy is up to the task of protecting Broke Jaw Ranch from Walker. Troy says he is.

Images From This Episode[]

The gallery below is automatically generated and contains images in the category "Images from Red Dirt". Images added to that category turn up in the gallery after a short time.

Behind The Scenes Images From This Episode[]

The gallery below is automatically generated and contains images in the categories "Images from Red Dirt" and "Images from behind the scenes". Images added to these categories turn up in the gallery after a short time. <gallery type=slideshow hideaddbutton=true widths="700">:File:FTWD 306 RF 0308 2167-RT.jpg

Interesting facts about the making of, the story of and the people of this episode.