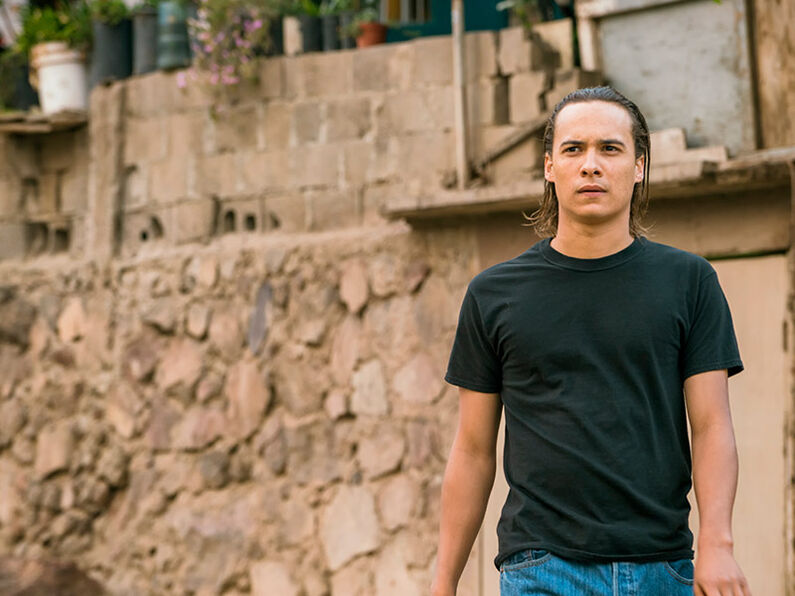 "Pillar of Salt" is the twelfth episode of the Second season of Fear the Walking Dead. It aired on 18 September 2016 on AMC.

Francisco sneaks out of La Colonia with his wife, Ana, and their young daughter [][Nikkita]]. Nikkita is scared and doesn't want to go, Ana tells her daughter it’s no longer safe in La Colonia. They cover themselves in Infected blood to get safely through The Wall.

Marco Rodriguez, and a man who turns out to be Antonio Tobar, spot Francisco’s family on a Tijuana road. Francisco tries to hide, but they have already been seen. Marco recognizes him and demands the OxyContin he’s been promised by La Colonia.

Ofelia drives to a restaurant, in the truck she took from outside the Rosarito Beach Hotel hotel. Inside, she kills an Infected woman with a hammer and then stands looking at the patio overlooking the ocean.

In a flashback, Ofelia is dining there with her boyfriend, Will, at an oceanside restaurant. Will proposes to Ofelia and asks her to move to Santa Fe, where he is about to take a new job. Ofelia hesitates to leave her parents in Los Angeles, but agrees to speak with her mother.

Back in the present, Ofelia studies a map and then expertly siphons fuel from another car.

At the hotel, Madison's Group and Oscar Diaz's Group work together to secure the hotel and build a refuge: They fortify the front gate, plant and water a new garden, fish off the pier and power up the generator.

Alicia works hard taking surfing lessons from Hector and talks to him about Nick. Hector reveals his own brother is lost to him as well after falling in with a Tijuana gang.

Reynaldo stops by Nick’s trailer, Luciana and Nick have to dress hurriedly, to inform Luciana that Francisco and his family have sneaked out of La Colonia. Reynaldo refuses to make the upcoming Oxy trade without Francisco. Nick volunteers himself and Luciana to make the trade so that the community can have water.

In Elena Reyes’s hotel room, Madison, Strand, Alicia and Elena discuss progress so far and decide to run the generator for just a few hours a week, enough to make ice and boil water. Strand answers a knock at the door and Ilene Stowe stabs him without warning'; she says “You took my daughter from me”.

Madison tends to Strand’s wound in bed. Oscar Diaz brings over Andrés, a medical school student. Andrés examines Strand’s wound and says he needs a suture kit, antibiotics and erythropoietin. Elena says that all of the local pharmacies have been emptied, but suggests a place that might have what they need.

Nick and Luciana inform Alejandro that Francisco left La Colonia with his family. Alejandro is angry, “No thank you, no goodbye,” he says bitterly. He asks Luciana to speak with the scouts to boost morale in the wake of Francisco’s departure.

Madison tells Oscar that Ilene must remain locked up indefinitely. She also declares that, going forward, anyone who harms anyone else at the hotel will be banished.

Alejandro addresses his people at the church and urges them to keep their faith in him and in the safety of their home. Afterwards, he questions Luciana’s loyalty for neglecting to speak with the scouts immediately. He forbids her and Nick from doing the drug trade, despite Nick’s fears that Marco will come for them if he doesn’t receive the Oxycontin.

Madison, Elena and Oscar get in a van to drive to El Pelicano, the supermarket run by the Los Hermanos gang.

On the road, Elena explains that Hector’s brother, Antonio Tobar, lives with the narcos. She says Hector has never forgiven Antonio for choosing the gang over his own family.

Madison, Elena and Oscar arrive at El Pelicano with a cooler. Elena tells the guards that she has something for Antonio. They allow Madison and Elena to enter.

Nick again urges Alejandro to make the drug trade. Alejandro refuses and accuses Nick of lacking faith in him.

Madison and Elena give Antonio a cooler full of fish and ice and request the medicine for Strand in exchange. Antonio asks if they can provide more ice. Elena agrees. Antonio tells them to wait. Meanwhile, they hear Marco yelling in an upstairs office.

Upstairs, Marco interrogates his captives, Francisco and Ana, about the location of La Colonia. Francisco assures Marco that someone will deliver the Oxy.

Madison and Elena overhear Marco’s interrogation. Madison asks Elena to translate for her and runs upstairs when Marco describes an American with “ratty hair” who delivered drugs to them.

Desperate for news of her son, Madison barges into the office and demands the name of the ratty-haired boy. Francisco forbids Ana from answering. Marco orders them out. Antonio gives them the medicine and tells them to stay away, saying they won’t be at the supermarket much longer.

In La Colonia, Nick asks Reynaldo to help him make the drug trade. Reynaldo agrees to accompany Nick that night.

Luciana talks to scouts outside Nick’s trailer. She notices a look on Nick’s face. He insists nothing is wrong.

At the hotel, Alicia lays a blanket over Strand and compresses his wound. She explains that she helped Nick through his detox withdrawals and says that Madison still doesn’t fully see her. “Then make her,” Strand suggests.

Nick surveys the area from a La Colonia rooftop. Marco, who is staked out nearby, spots Nick through binoculars.

In a flashback, Ofelia talks to Griselda about their family. Griselda explains that she and Daniel left El Salvador to shelter Ofelia from the violence and bloodshed and vows to do anything for Ofelia and Daniel. “That is love,” she says. Ofelia takes her hand, choosing her family over Will.

In the present, Ofelia kisses the rosary beads and hangs them on her rearview mirror. She drives toward the U.S.

Madison, Elena and Oscar return to the hotel after dark. Madison runs to the generator and turns it on, lighting up the hotel sign in the hopes of signaling Nick. Alicia warns Madison that people will see the sign from all around and accuses Madison of thinking more about Nick than her, even though Nick chose to run away.

Travis stands in the hills overlooking the Rosarito Beach Hotel and spots the hotel’s neon sign.[1]

Director Gerardo Naranjo (right)
Add a photo to this gallery

Retrieved from "https://fearthewalkingdead.fandom.com/wiki/Pillar_of_Salt?oldid=21682"
Community content is available under CC-BY-SA unless otherwise noted.