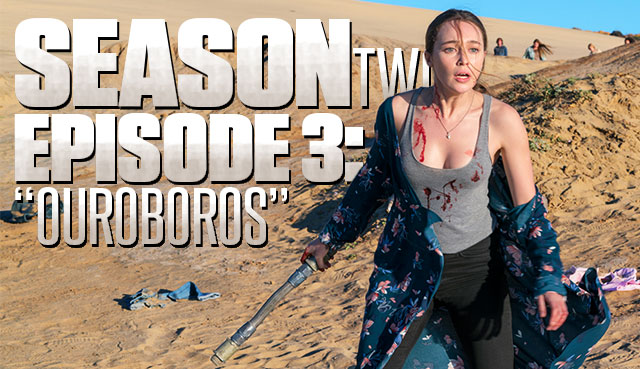 "Ouroboros" is the third episode of the second season of Fear the Walking Dead. It aired on 24 April 2016 on AMC.

Flight 462 has landed… either in the ocean and bounced up onto the beach in pieces or vice versa. Either way, there's wreckage, bodies, survivors and the infected both in the water and on land. Alex finds Jake hanging onto some floating wreckage; his face is badly burnt. They both make it onto a life raft where there are already two other survivors, both men. They argue about Jake, saying that it would be kinder to kill Jake rather than let him linger on in agony. Alex refuses to kill Jake and one of these men later tries to kill him when they're all asleep, Alex wakes and kills the man with a knife.

Back at The Abigail, Strand makes another call to a stranger. The Abigail comes to a halt after some very bad noises from the engines and Travis dives in to investigate. He discovers one of the dead with its arm blocking the water intake that cools the engine, once the intake in unblocked on the outside Travis works on the blocked filters in the Engine Room.

Alicia spots wreckage, mostly luggage, from Flight 462 on the beach and after some discussion the group decide to raid it for supplies with Daniel leading the young people (Nick, Alicia and Chris) on land. Daniel reveals Strand’s plan to head to Mexico to Madison, and asks her to confront him about it. Nick and Alicia sort through the wreckage while Chris explores the inside of Flight 462 alone. He only finds the dead who strain to reach and bite him until a man he'd thought was dead turns out to be still alive and says "Help me." Chris tries to help him, but the man's too badly hurt. The man asks Chris to kill him and, with some difficulty, Chris does.

Madison confronts Strand about Mexico and he eventually explains he’s planning on taking them to a house in Baja that is secure and has food and water. On land Nick helps Daniel choose the right medication for Ofelia while a traumatised Chris puts the dying man on the plane out of his misery by beating him to death with a metal bar. Daniel searches for Chris while Nick discovers a medicine bag. Travis continues to work on the boat while Madison fills him in on Strand’s plan.

A panicked Alex runs over the hill and meets Daniel, telling him to run from the horde of the dead just behind her. Nick stumbles down the hill and immediately gets attacked by an infected that becomes stuck in a pit. He stabs it in the head while another walker falls off. Alicia finds Chris while Daniel uses the walkers as target practice. Madison spots the horde of infected and orders Strand to move the boat closer to shore.

Alex, Alicia, and the rest take out the walkers as Travis finally fixes the boat. Nick arrives, covered in blood, and saves Alicia. In the process, Nick realizes that the blood he's covered in acts as a disguise and allows him to walk among the infected. The group makes it back to The Abigail (with Alex and Jake) and Madison fills everyone in on the Mexico plan.

Over Strand's objections Travis and the group give Alex and Jake water and tow their raft behind The Abigail. Strand appears to go along with this but, as soon as he can, he cuts the tow-line and sets them adrift out at sea. 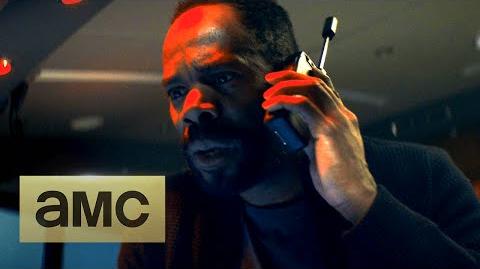 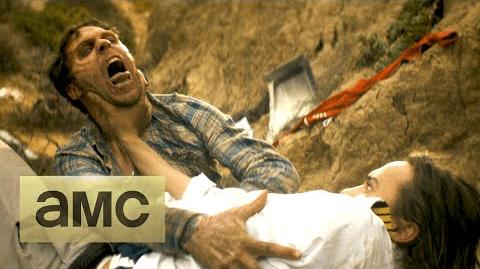 Next on Episode 203 Fear the Walking Dead Ouroboros

Jake and Alex in the liferaft

Retrieved from "https://fearthewalkingdead.fandom.com/wiki/Ouroboros?oldid=21673"
Community content is available under CC-BY-SA unless otherwise noted.