This Nurse was a minor character in the first season. She is portrayed by Lynn Chen.

Nothing is known about this nurse before the apocalypse, except that she was a nurse.

The Nurse was assigned to care for Nick Clark. Nick fools her into removing a wrist restraint, as soon as she leaves the room Nick unfastens the other wrist. As he does so the patient in the next bed goes into cardiac arrest and the alarm sounds. The Nurse is among the hospital staff to respond and helps move the man to another room.

Later, the Nurse is confronted by Travis and Madison regarding Nick's whereabouts as he left the hospital. The Nurse says he was eighteen so he had the right to leave, and tells them to call the police. 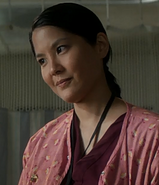 Telling Travis and Madison that they ".. need to call the police."