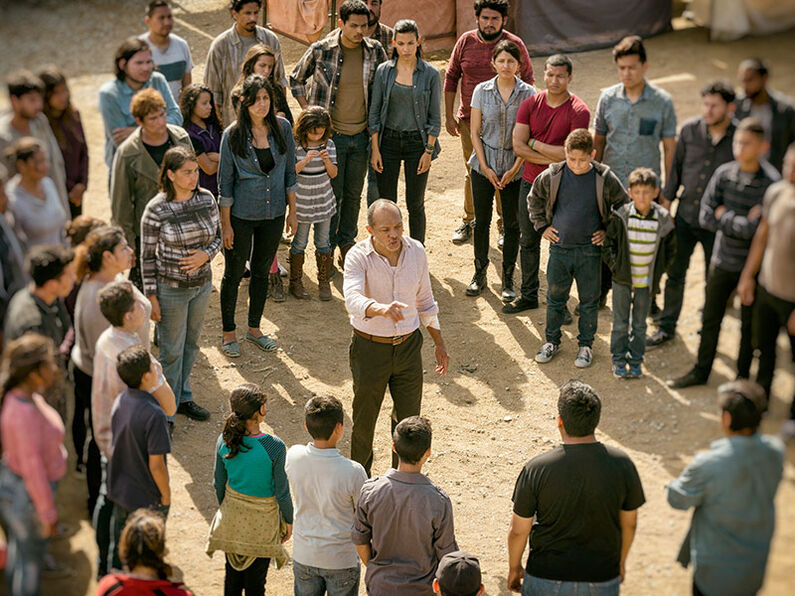 "North" is the fifteenth episode of the Second season of Fear the Walking Dead. It aired on 2 October 2016 on AMC.

This is the season finale.

Travis sits dazed on the hotel cafe floor after killing Brandon and Derrick. Hector and Elena haul Travis away and remove Oscar, who is unconscious after Travis attacked him to prevent him from interfering. Madison tries to defend Travis but Elena points out that he killed two men and hurt Oscar.

Madison returns to the cafe and stabs Brandon and Derrick through the head.

Luciana dresses Alejandro's bite wound. He tells her he's dying and she orders him to lie to the townspeople to keep their faith intact.

Strand tries to dissuade Madison from speaking up for Travis, who Elena wants to banish. Alicia and Madison decide to leave the hotel together with Travis. Strand refuses to join them.

Madison tells Elena that they will leave with Travis in the morning and asks her to release Travis from captivity. Elena feels she owes Madison and allows it despite Hector’s reluctance.

Madison enters the game room where Travis is locked up and tells him that she and Alicia will leave with him in the morning.

Nick begs Luciana to leave La Colonia with him. “We’re going to meet our fate,” she says. “Do what you do, Nick. Run.”

Andres treats Oscar, who is still unconscious. Alicia offers to help. He tells her he must remove a piece of Oscar’s skull to reduce swelling and orders her to leave.

Alejandro warns the townspeople that men are coming to kill them but that their faith will protect them. “We will not die today,” he declares.

Meanwhile, Nick leaves La Colonia. As he walks down a Tijuana road smeared with Infected blood, he spots a helicopter landing in the near distance.

Andres drills into Oscar’s head as Elena and Hector stand by.

That night, Madison joins Travis on the balcony of their hotel room and assures him that Brandon and Derrick deserved their fate. She says that she too killed someone — Celia — in order to protect Nick.

Oscar dies on the operating table. Andres slams his fist in anger. Hector seethes and rants to Elena that Travis is safe and sound upstairs. Elena reminds him that they made a deal with Madison.

Hector and Andres barge into Travis’s room and beat him. Andres holds a gun to Travis’s head. Alicia stabs Andres, and a melee ensues. Strand grabs Andres’ gun and orders everyone out. “We need to run,” he says.

Travis, Madison and Alicia pile into a car outside the hotel. Strand gives the gun to Madison and stays behind. Travis accelerates and plows through the front gate.

Madison, Travis and Alicia go to El Pelicano to look for Nick. They discover the bodies of Francisco’s family in the back of the empty market, bullet wounds through their heads. They find Francisco’s driver’s license with his La Colonia address.

The next day, Marco and his gang arrive at La Colonia and shoot Infected in the fenced yard before entering the premises.

Marco’s gang finds the town deserted and celebrates their easy victory. Alejandro watches from a hiding spot then goes to the school bus in the yard. He starts the bus. Marco hears the bus and runs toward the yard.

Alejandro drives the bus forward, unblocking the fence gap and allowing the Infected to flood into La Colonia. Marco’s gang sees the herd walking toward them and runs.

Nick and Luciana lead the villagers toward the U.S. border.

Madison, Travis and Alicia arrive in La Colonia. While Madison and Travis go to the village, Alicia stays behind in the yard and notices the stalled school bus.

In the town square, Travis and Madison encounter a large herd of Infected, which now includes Marco’s gang.

Madison and Travis find Alicia on the bus, tending to a dying Alejandro. Madison tells Alejandro she’s looking for Nick. Alejandro says that Nick went to the border.

Nick, Luciana and the villagers arrive at the border crossing. A plume of smoke rises in the distance. Through binoculars, Nick sees the medevac helicopter leaving a refugee camp. A gunman pops up from behind a car and Luciana is shot. A group guarding the crossing opens fire on the villagers. Nick and Luciana hide behind a booth but are captured by one of the attackers.

On the bus, Alicia hands Madison a knife. Madison closes Alejandro’s eyes, turns his head to the side and drives in the blade, offering him mercy.

The armed men separate Nick and Luciana and shove them to the ground.

Retrieved from "https://fearthewalkingdead.fandom.com/wiki/North?oldid=21686"
Community content is available under CC-BY-SA unless otherwise noted.