Nick is Madison's eldest child and because of the problems he has, she feels the need to protect him. It's evident from the "Pilot" that although they are close, Nick would rather confide in her partner Travis. It can be assumed this is because Nick sees Madison as overbearing and judgemental, as she's the only one who pushes him to change. Her outburst and loss of control with him during "Not Fade Away" seems to be an isolated incident, so far.

Nick appears to resent and mistrust Travis, refusing him as a step-father figure. However, Travis tries to help Nick throughout, readily taking responsibility for him. This is prominent most in the "Pilot" when Travis stays with him at the hospital, investigates the abandoned church and then arrives to help him after Nick calls upon killing Calvin.

Before Nick's death, he and Luciana were dating. On the search for her missing brother, Luciana meets Nick and takes him back to La Colonia, so that he can rest and heal from his injury (being bitten by wild dogs in "Grotesque"). Although they disagreed on things and even got into heated arguments throughout late Season 2, they still appeared to harbour feelings for each other. It's in "Pablo & Jessica", that Luciana first kisses Nick and their romantic relationship starts. When a threat looms over La Colonia, Nick begs her to leave with him and outs Alejandro's secret to try and convince her. He is protective, caring and honest towards her which plays into his development as a person.

Strand is known to be well-spoken, wealthy and does whatever means necessary to survive. He first meets Nick in "Cobalt" and "The Good Man" is when they form an alliance. In Season 1 and Season 2, Strand explains that Nick's addiction is the reason he's useful. On The Abigail especially, Nick serves as Strand's risk-taking errand boy as a means of paying him back for saving him and his family.

Calvin is Nick's drug dealer and former friend that we meet in the "Pilot". Convinced he's going insane after his apocalyptic experience in the church, Nick meets with Calvin. Nick appears to be intimidated by Calvin, abandoning his manipulative and cocky persona we see in the hospital. Paranoid by Nick's behaviour, Calvin attempts to kill Nick using a gun. Calvin meets his demise by his own gun and returns as a walker.

Liza was well aware of Nick's addiction even before the apocalypse, expressing concern for him in the "Pilot". In "The Dog", Liza knowingly looks to Nick after hearing there are no pills available. In "Not Fade Away", Nick openly calls Liza a 'narc' after she confesses to Dr.Exner about Nick's addiction. It's because of this, that Nick is forcefully taken by the soldiers, to which Madison blames Liza.

Their main relation is that Madison and Travis are together. In the "Pilot" episode, Chris claims that Nick isn't his brother, nor does he want to visit him in hospital. Despite this, they don't appear to hate each other. Like in "Monster", after hearing Chris jump into the sea, Nick immediately dives in after him. In "Captive", when Reed is taunting Chris, Nick closes the door on him and attempts to reassure Chris about his guilt. In "Eye of the Beholder", Nick is stunned by the news of Chris' death. 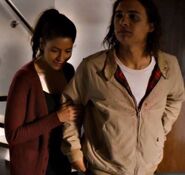 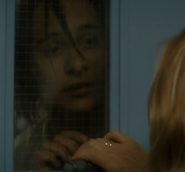 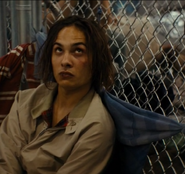 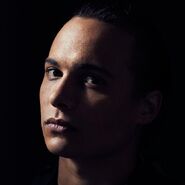 Retrieved from "https://fearthewalkingdead.fandom.com/wiki/Nicholas_Clark?oldid=31542"
Community content is available under CC-BY-SA unless otherwise noted.