Lieutenant of the National Guard

Moyers was a minor character in the first season. He was portrayed by Jamie McShane.

Moyers was a Lieutenant in the California National Guard. He was the C.O. of the detachment in charge of Safe Zone India, a Safe Zone established in the El Sereno area of LA.

Moyers is a soldier in the U.S. Military. His unit insignia shows that he at one time served in the 10th Mountain Division of the U.S. Army. He tells one of his subordinates that manning the safe zone was easier than some of his past assignments where people shot back, indicating he has seen combat.

Moyers is assigned with guarding the Safe Zone in the El Sereno neighborhood and clearing the surrounding area. Moyers nine days after securing the neighborhood, addresses the residents inside. After, Moyers enlists Travis Manawa to help to convince Doug Thompson to submit to the health screenings that the military is giving to all residents. Travis attempts to tell Moyers he barely knows the guy, however Moyers insists that he bring him out.

The next morning, Doug Thompson attempts to leave the safe zone after curfew. Travis investigates, finding his car at the fence. Travis talks about it to Moyers, who is golfing on the other side of the fence, with other military surrounding him. Moyers says that they detained Doug and had him taken to the medical facility as he is a "nutcase", being found crying in his car. When Travis suggests that he should have told Doug's family so they wouldn't be worrying, Moyers claims that it's not his job, and that Travis should tell them himself. Later, Christopher Manawa speaks with Travis about a survivor outside the safe zone trying to get their attention. Travis brings this up with Moyers, and Moyers explains that they went house to house, so there are no others. That night, Travis is on his roof, trying to investigate the survivors Chris and Madison are seeing. Travis is watching the building, and soon after there was gunfire at that location. This could be the work of Moyers, as Travis spoke with him about the location of these survivors.

Travis goes to Moyers asking where the people from his house, Nick, Liza and Griselda, have been taken. Moyers. When Travis won't be put off, Moyers says he'll take Travis to the hospital so that he can see. Travis goes with him; on the way Moyers insists they stop and put down nad Infected woman he spots. He uses this as an opportunity to put Travis in his place, he tries to get Travis to shoot the woman and then does it himself when Travis refuses. They set off again, but we don't get to find out where Moyers was actually going to take Travis as they are diverted to assist a patrol in difficulties at a library near them. When Moyers, the four Guardsmen with him and Travis arrive at the library the soldiers all go in to try and clear out the building. Moyers doesn't come out and is presumed dead. It's not known whether he is killed the Infected or by members of his own command but it is worth noting that the four Guardsmen that went in with him all came out, and that chose to desert immediately after, dropping Travis back near the Safe Zone and then leaving to find their families. 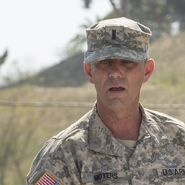 Retrieved from "https://fearthewalkingdead.fandom.com/wiki/Moyers?oldid=30132"
Community content is available under CC-BY-SA unless otherwise noted.