End of the Line

Leader of his own group

Morgan Jones was a major character in the fourth and fifth seasons. He is portrayed by Lennie James.

Morgan is a survivor from Georgia who traveled west in search of meaning in his life. In the fourth season, he arrives in Texas and finds various survivors, some from the Dell Diamond Baseball Stadium. Morgan ends up forming a group with them in order to help people.

Morgan was born and raised in Macon, Georgia in or around the 1960's (given his age). He met and married a woman named Jenny, and they had one child, Duane.

Some time after the apocalypse, Morgan and his family packed up and started heading for Atlanta, where FEMA (Federal Emergency Management Agency) had set up a safe zone. Unfortunately, they never made it, as Jenny got infected in King County, Georgia. After Jenny's death, Morgan and Duane stayed on in King County, where they eventually ran into Rick Grimes. They stayed on after Rick left.

At some point after Rick left, Duane got infected. Morgan had a mental breakdown after loosing both his wife and son. When Rick met him again, Morgan was barley functioning. After Rick left for a second time, Morgan seemed to have improved somewhat and set out from King County. On his journeys, he met a former police phycologist named Eastman who taught Morgan the maxim that would be his life goal- to help others. After Eastman's death, Morgan continued on his journey, finally meeting up with Rick in Virginia.

After a massive fight, Morgan left Virginia, finally arriving in Texas where he finally meet the people who would form Morgan’s Group. 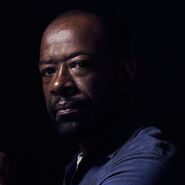 Retrieved from "https://fearthewalkingdead.fandom.com/wiki/Morgan_Jones?oldid=31367"
Community content is available under CC-BY-SA unless otherwise noted.