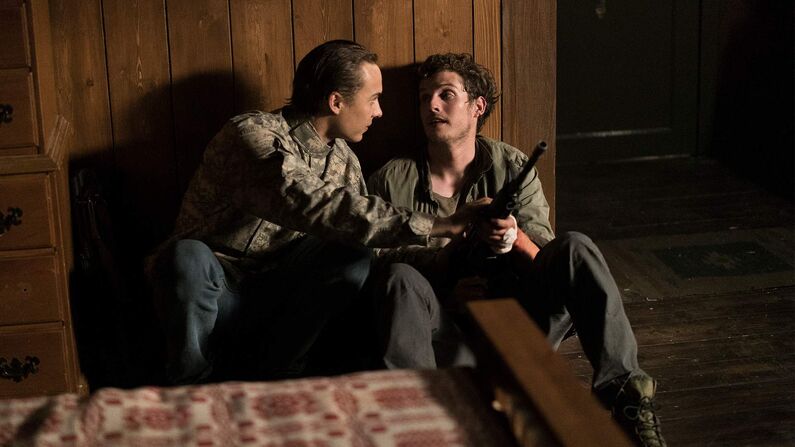 "Minotaur" is the nineth episode of the Third season of Fear the Walking Dead. It aired on 10th September 2017 on AMC.

Madison wakes up in Jeremiah Otto's house and rummages through the dead man's office.

Elsewhere, Nick, Troy and the militia lure Infected into an ambush.

Alicia strenuously works the water pump, but only a few drops come out.

Nick kills an Infected and gazes toward the border, thinking of Luciana.

Alicia returns to Jake's quarters with the water she's collected. Jake's awake and out of bed, she cleans his face with a damp cloth and frets over his slow recovery from the anthrax attack.

The militia returns to their ATVs and discusses the influx of Infected. Nick suggests they mend the fences.

Madison searches Otto's desk, his blood stain is still there from the murder that took place and some of the drawers are still locked.

Nick and Troy spot Walker's convoy as it approaches the ranch, Troy isn't pleased. Jake greets the convoy and shakes Walker's hand. The ranchers warily look on as Walker waves the convoy through the gate: The Nation has officially come to live at Broke Jaw Ranch.

Jake leads Walker into the pantry to discuss details of the Nation residing at the ranch. Troy walks out after voicing his disdain for the Nation and butting heads with Crazy Dog, Walker’s right-hand man. Jake assures Walker that, unlike Troy, most ranchers have accepted the peace deal.

Jake shows Walker the arsenal and gives him one of the two keys required to access it. He explains they can only access the arsenal when the other is present.

Nick joins Troy at Otto's grave and says that he, too, lost an alcoholic father to what was probably suicide. Troy blames Otto for killing himself and leaving them with a mess.

At the dam, Lola mobilizes her group to distribute water on the street. Daniel and Efrain urge her to stay behind for her safety, but she insists on joining them.

Crazy Dog and Coop check Nation warriors and ranchers for weapons at the entrance to a meeting tent. Crazy Dog tells Klah that he can't bring his knife inside and Klah chooses not to go in the meeting.

Alicia informs Madison that she is undermining Jake's leadership by back-channeling with Walker. Madison denies that she's been speaking to Walker, but Alicia doesn't believe her.

Lola distributes water to desperate people in the streets while Daniel stays on the lookout for threats to her safety. But he doesn't see two groups of Infected that approach, the crowd only disperse when someone else raises the alarm.

In the meeting tent, Jake urges the ranchers to forgive the Nation and work toward building a future together. Walker declares that his grudge against the ranch died when Otto sacrificed himself for a peace deal.

Nick visits Ofelia in the adobe. She's keeping out of the way because she killed ranchers with anthrax, but she admits to not feeling particularly guilty about it. She asks Nick if he feels any guilt for what he's done.

Walker privately asks Madison if she's prepared to handle Troy, should he become a threat. She assures him that she is.

Troy complains to Jake about the peace deal. Terrance points out that Walker's people killed Gretchen and Jake reminds them that Walker denied killing the Trimbols. After Jake leaves, Troy stirs up trouble, complaining about the people the nation has killed. Gretchen's death is still affecting Terrance.

Alicia finds Walker burying his father's remains in the desert, he says that he's doing it privately because his people would be angry if they knew what had happened, He tells her that he does want peace. She tells him to deal directly with Jake, not Madison, but he disagrees.

Madison pries open a drawer in Otto's desk and finds documents detailing water levels at the ranch from 2007 to the current year, 2010.

Terrance walks up to Crazy Dog and pulls a gun from his hoodie. Crazy Dog spins around knocking the gun away from him. A stray bullet hits a member of the nation. Crazy Dog locks Terrance in a choke hold, nearly choking him to death and only releasing his victim when Walker steps in.

Alicia tells Walker that Terrance is going to asphyxiate and die from a crushed throat. Walker worries that other ranchers will follow Terrance's example and demands the second arsenal key from Jake so that his people can arm themselves. Madison takes Walker's side and urges Jake to let the Nation control the weapons and sweep the ranch for all remaining weapons. Jake reluctantly gives Walker the key.

The militia and Walker's warriors collect weapons from all the ranchers.

Nick tells Madison that he can handle Troy, but Madison worries that Troy will kill Nick if he finds out that Nick killed Otto. Nick is not sure what reaction he will have.

Madison, Nick, and Walker go to Otto's house to collect weapons from Troy. When Walker heads upstairs to check the house, Troy grabs a gun from Otto's desk ordering everyone out. Nick stands in the way of Troy who fires a warning shot into the ceiling. Everyone clears out. Nick stays behind with Troy.

Madison promises Walker that she can fix the situation with Troy and Nick.

Inside, Troy opens a secret cache of weapons and suggests they snipe Walker;s people from upstairs. Nick urges Troy to honor Otto’s self-sacrifice and stand down but Troy's mind is made up. He hands Nick a rifle.

Talking up at a window Troy has smashed, Madison urges Troy and Nick to disarm, but they're interrupted by gunfire from the Nation. Troy fires back. Someone pulls Madison out of harm's way.

Walker's men enter Otto’s home and open fire. Troy saves Nick from Crazy Dog and gets a knife through the hand in the process. Nick and Troy take cover in an upstairs bedroom. Troy prepares for his final stand.

At the dam, Lola counsels Daniel to stop looking for Ofelia. She needs him and is worried his hope will only lead to heartbreak.

Nick pleads with Troy to give up the fight. Nick finally attacks Troy to stop him firing and then, to distract him at the Nation break into the room, confesses that he killed Otto. Troy is stunned and aims his gun at Nick but decides not to shoot. He's broken by the news about his father. Walker's men barge into the room.

The next day, Madison and Walker discuss punishments for Troy and Nick. Madison tells him that Terrance, who killed John Hogan, will be dead soon but worries that killing Troy would only turn him into a martyr, so they agree to exile him. She forbids Walker from killing Nick or exiling him.

Lola and Efrain distribute water to a crowd. A young man accuses them of controlling the dam for personal gain and a stone is thrown - hard, hitting Lola on the head. Daniel rushes Lola to the truck as the crowd turns on them and attacks. They drive off.

Jake tells Troy the punishment that's been handed down. Troy takes the news in his stride and insists that Madison is the one who takes him into exile.

Walker gives Troy provisions, a knife, a gun and one bullet, in case he doesn't want to live. A Nation warrior escorts Nick to an outhouse for imprisonment. Walker tells Madison that Nick will live. She and Klah drive Troy into the desert.

Madison parks in the middle of the desert, well out of sight of the ranch. Troy gets a hold of Klah's knife and stabs Klah repeatedly killing him, he doesn't stop when Madison aims a gun and tells him to. Madison fires in the air and orders him to go, he reveals that he knows about Nick killing Otto. Madison lets him get too close and he takes the gun. wrestles her. Madison regains control and points the gun at him.

Troy stands up, takes his pack and walks off into the desert alone.

The gallery below is automatically generated and contains images in the category "Images from Minotaur". Images added to that category turn up in the gallery after a short time.

The gallery below is automatically generated and contains images in the category "Images from Minotaur". Images added to that category turn up in the gallery after a short time.

Retrieved from "https://fearthewalkingdead.fandom.com/wiki/Minotaur?oldid=25904"
Community content is available under CC-BY-SA unless otherwise noted.