The Mexican military is the name given to the combined military forces of Mexico. So far, only ships and personal of the Mexican Navy have been seen onscreen.

In the episode "Blood in the Streets", both Victor Strand and Luis Flores state that they have a contact who can help them get past the border and into Mexico. In the episode it is revealed that their contact is a member of the Mexican Navy, who is part of a small flotilla patrolling the coastal waters around Strand's intended destination in Baja California. They open fire on the Abigail after the gunfight between Luis and his contact.

From the conversation Strand and Luis had with their contact, the main aim of the flotilla that greeted the Abigail appears to be to keep infected ships from making landfall on Mexico's coast. It can be implied that the army is engaged in stopping the infected crossing over the border from the United States, since George Geary mentions that Mexico had sealed its borders with the U.S. This may account for the lack of soldiers present after Strand and the others got onto land.

At the beginning of season 2, it was easy to assume that, while there were known small scale outbreaks in Mexico, the military was concentrating on defending the boarder and securing safe zones with the larger cities.

However, it is now know that (in the state of Baja California at least) there is no military activity whatsoever, as large groups of Infected roam freely, only being confronted/contained by members of La Colonia and the Los Hermanos gang. It is highly possible that the Mexican military in Baja suffered the same fate at the National Guard in Los Angeles - in that they were completely overrun. It is unknown to what extent to boarder crossing between San Diego and Tijuana aided in the downfall of the military in the sate.

Evidence for this was implied early in the season, as after the shootout between Strand and his contacts, when asked why the other members of the flotilla didn't follow them or why they didn't try and sink The Abigail, he simply responds that those involved in the flotilla believe that whatever is on land would kill them.

So far, only small costal craft of the Mexican Navy have been seen on screen. They appear to be heavily armed as they were able to fire upon the Abigail from a distance. The situation for the military and their equipment may be becoming dire, as it is implied they stole The Abigail.

So far, only two members of the Mexican Military have been seen onscreen: 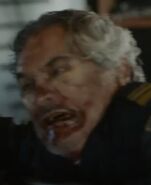 Vazquez after been stabbed by Daniel to prevent reanimation 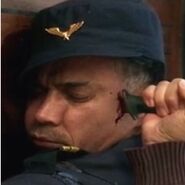 Strand's military contact after being stabbed in the head by Daniel to prevent reanimation]
Add a photo to this gallery
Retrieved from "https://fearthewalkingdead.fandom.com/wiki/Mexican_Military?oldid=30242"
Community content is available under CC-BY-SA unless otherwise noted.