Madison Clark, also known as Maddy or Miss C (by her students, before The Fall), originally from Alabama, was a guidance counselor at the Paul R. Williams High School in El Sereno. Prior to the zombie apocalypse; she helped students prepare for their future. She brought up her two children after the death of her husband Stephen Clark in a traffic accident. [1]

Madison was described in the initial casting call as "a thirty-something single mom to two kids", and "looks like the girl next door, but there's an edge to her".[2]

Madison had a troubled relationship with her father, hitting him during an argument at the age of 13. Eventually, she shot and killed her alcoholic father when she was still a child because of how he beat her mother. The killing was not uncovered by the authorities.

She attended college and worked as a bartender to pay for her student fees. Eventually, she met and married Stephen Clark and got a job as a guidance counselor.

She was a single mother to her two children after the suicide of her husband Stephen Clark and had a miscarriage between the births of Nick and Alicia. She worked as a guidance counselor at Paul R. Williams High School and was said to be popular with the students. One of the English teachers there, Travis, was her fiance.

Like many others, the apocalypse brings up issues from her past that had been long buried, and that she now has to deal with. It has also brought out that "edge" in her; she is one of the people who can see the difficult decisions that are needed, now that the world has changed, though she's not always as quick to take those decisions.[1]

Her character is changing as time goes by. She puts down the headmaster (Art) of the school where she works, with some skill - after a slow start. She was willing to expel the remnants of Brandon's Group from the Rosarito Beach Hotel until Travis made that a moot point.

Madison and Travis from the "Pilot"

Madison at the school

Madison as she appears in Dead Run 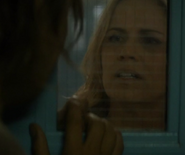 Madison and Nick take on some Infected

Madison in the trailer for Season 3

Retrieved from "https://fearthewalkingdead.fandom.com/wiki/Madison_Clark?oldid=28375"
Community content is available under CC-BY-SA unless otherwise noted.