Blood in the Streets

Luis Flores was a recurring character in the second season. He was portrayed by Arturo del Puerto.

Luis Flores is the son of Celia Flores and the personal assistant to Thomas Abigail. He is a very protected person but also offers a spiritual understanding of the world. The Flores family, including Celia and Luis, have worked for the Abigail family since at least the time when Thomas Abigail and Luis were children.

"Blood in the Streets"[]

Luis is first introduced near the end of the episode as the person Nick has been sent ashore to meet. Luis had holed up in a half finished and abandoned housing project. He drives Nick to the shore where he had a boat hidden on the beach and they make their way to The Abigail, where they spot the pirates who had boarded. Using a high powered sniper rifle, Luis kills two of the pirates.

Luis orders Madison to turn the ship around, reminding her that they only have a small window of time to cross into Mexico. Madison refuses to abandon her family and asks Strand if she would’ve been better off leaving him in the water. Strand agrees to give Madison half a day to rescue Travis and Alicia.

In Spanish, Luis tells Strand someone is waiting for them and they need to go, but Strand says “he” would understand. Luis counters that he only has enough money for two people to cross the border. “Everything is a negotiation,” replies Strand, as Daniel listens in.

After a shot is heard, Chris walks down the hall with a gun and tells Ofelia that Reed was about to turn. The group finds Reed dead in the cabin with his face blown off.

Madison comforts Chris. They overhear Luis complain that the trade is now dead. Chris realizes that he just destroyed any hopes of getting Travis back peacefully.

Luis and Strand make contact with their contact in order to cross the border. It is Miguel, a member of the Mexican navy who is part of a flotilla guarding the boarder. However, Miguel is not alone when he comes aboard The Abigail. He is accompanied by Vazquez. There is a few minutes of talking before either Miguel or Vazquez wonder as to the size of The Abigail, and comment on how it is too big for just two people. They demand to see the rest of the boat. There is a short, tense standoff that ends in a gunfight. Luis is mortally wounded by the officers of the Mexican border flotilla. The two officers are killed in the same gunfight, off-screen but presumably by Luis.

As Luis is dying he begs Daniel not to stab him in the head and asks Nick to give Celia, his mother, a religious medallion. Daniel takes it and throws it into the sea.

Later, Nick brings Infected Luis to the Abigail estate and to Luis' mother. Infected Luis is in the cellar when Celia is left in there by Madison. He would be later burned to death once the mansion gets on fire. 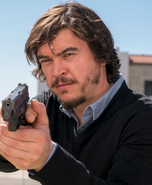 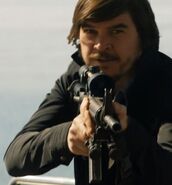 Luis points a gun at Nick