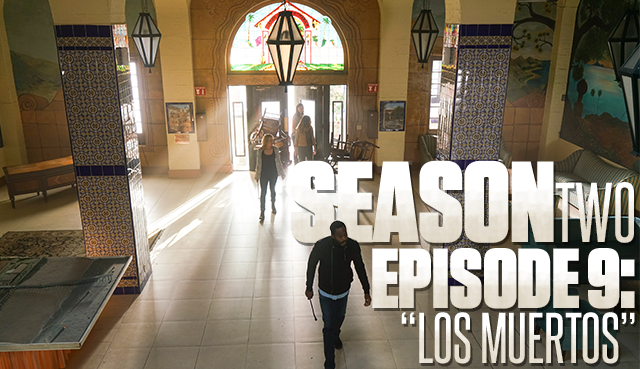 "Los Muertos" is the ninth episode of the second season of Fear the Walking Dead. It aired on 28 August 2016 on AMC.Los Muertos is Spanish for "The Dead".

Nick wakes up in the infirmary in La Colonia[1] in the bed next to a sick woman who is coughing weakly.

He leaves the infirmary and wanders through the town; he sees a young girl crying. She is watching a man in a nearby field and calling him Pappa. In a nearby field, the girl’s father stands surrounded by neighbors from the Colonia. "Ready?" asks Alejandro, the community’s leader. The man hands his knife over and enters a bus, Luciana closes the door behind him. Through the bus he passes into a gated field, filled with Infected. He sacrifices himself to the herd as the people look on.

Madison, Alicia, Strand and Ofelia drive around Tijuana in search of Nick. Alicia calls the search futile and insists they return to the The Abigail. Reluctantly, Madison agrees.

In La Colonia, Nick sees Alejandro inject an elderly man with medication, the man calls him "Doctor" and Alejandro, with the air of one who has explained all this before tells him he's a pharmacist and his name is "Alejandro". Alejandro confers with Luciana. They look at Nick.

Madison’s group arrives at the shore and find the Abigail missing, stolen by the Mexican military Strand assumes. Alicia suggests they take refuge at a nearby hotel. Before they leave the beach where they landed, which still has the the Abigail's Zodiac sitting on the sand, using driftwood, they write a message for Travis and Nick, "Abigail Lost Head North."

They drive to the Rosarito Beach Hotel’s pier and assess the situation from afar.

In La Colonia, Nick cleans bloody bandages at a faucet. Luciana tells him to stop and enlists him to help her in a job.

Madison’s group pulls up to the hotel and enters the lobby through barricaded doors, behind them, unseen, an infected watches them enter the hotel from another building and claws at a window. Strand rings the bell at the front desk to flush out any Infected. No reaction though, from either the dead or the living.

Luciana takes a doubtful looking Nick through the bus to the field of Infected, she pins an Infected man to a wall with two knives. She slits his throat and slathers herself, tastefully, in the Infected’s blood. Nick follows suit. The Dead ignore them both once the pair are covered in the man's blood.

Madison’s group looks for supplies in the hotel ballroom.

Nick and Luciana walk down a Tijuana street. He asks her about the man who had died that morning. Luciana says that the dying sacrifice themselves to the Dead and that once the Dead are gone, the world will be renewed. She also tells him that Alejandro was bitten but survived, Nick doesn't believe that's possible, since he hadn’t turned. Luciana says she saw it happen.

In the hotel bar, Alicia and Ofelia leave to search the hotel rooms above for supplies, Madison tells Alicia "No" but she goes anyway. Strand offers to make Madison a drink.

Nick and Luciana arrive at El Pelicano, a supermarket run by local gangsters. Luciana gives the leader, Marco, a bag of medication. In return, she receives a shopping cart. She says the deal was for two carts but Marco says it’s now only one. Nick and Luciana enter the supermarket to shop for supplies.

Madison and Strand drink martinis at the hotel bar.

Alicia and Ofelia collect clothes and food from the hotel rooms that don't seem to be housing any infecetd. In one, Alicia finds an Infected, a man who has killed himself by hanging from the bathroom showerhead. The two women are horrified. As they leave, Alicia puts a "Do Not Disturb" sign on the door to indicate an Infected inside.

At the supermarket, Nick puts a candy bar into the cart. Luciana puts it back and tells him to take only what’s essential. Nick sees a large group of dazed junkies camped out in the supermarket, and Marco kneeling next to one of the women looking after her.

Alicia and Ofelia gather supplies from another hotel room. Alicia wonders why the man hanged himself. Ofelia says that maybe he was just tired of surviving; she also says that they, the group, are not going to "make it". Alicia disagrees, she can't understand why anyone would ever give up on trying to survive.

Nick and Luciana leave the market with a full shopping cart. As they walk away, one of the gangsters charges and tackles Nick, revealing a pastry stowed in his pants. Marco comes after Nick with a machete and gets ready to chop off Nick’s hand. Through Luciana’s translation, Nick threatens to stop supplying Oxycontin[2] for the junkies, including the woman who he's guessed is Marco’s sister. In addition, he demands a second shopping cart. Marco begrudgingly agrees.

Nick and Luciana wheel two carts of supplies back to Colonia. Luciana worries the gang will follow them back and yells at Nick for upsetting the gangsters.

Madison and Strand move on to Tequila, get drunk and tell each other their life stories, or part of their life stories at least. Madison tells Strand about the death of Nick and Alicia’s father Stephen Clark: he was driving home from work and his car drifted into oncoming traffic. Strand assumes he fell asleep but Madison explains that, despite what she told her kids, she thinks their father killed himself. She worries the same darkness lives in Nick.

Madison flings her glass against the wall, pours more drinks, then flings another glass. Strand bangs on an out of tune piano.

Across the street, a trapped group of Infected pounds on the door of a gift shop, provoked by the noise in the bar.

Alicia takes a shower then looks for Ofelia. She goes to the balcony and is shocked to see Infected falling from the balconies. They walk out of their rooms, reach out over the balconies and drop to the ground. Damaged, but not usually destroyed, they are following the noise to the bar. She hears the loud piano music and screams for Madison.

Alicia runs into the hallway and finds the stairwell packed with Infected, she shuts the door and runs back.

Back in Colonia, Nick and Luciana drop the supplies off at the pantry. Nick gives the candy bar to the young girl whose father was sacrificed. Luciana ushers him inside a house to meet Alejandro.

Alejandro reprimands him for riling up the gangsters. He goes on to explain the importance of faith, saying only the faithful will remain once the world has been washed clean of death. "We have been chosen. We will outlast death." he says. Nick notices a scar, a bite taken out of Alejandro’s shoulder – it looks to be the bite Luciana spoke of.

Alejandro preaches to his people in the Colonia church. Nick stands in the congregation, after a while he starts to join in.

Madison and Strand fight the Infected and become trapped behind the bar. Alicia stands alone in a room. Ofelia is nowhere to be seen.

“From death we come, and to death we deliver ourselves.” the congregation repeats. Call and response. Nick joins them. 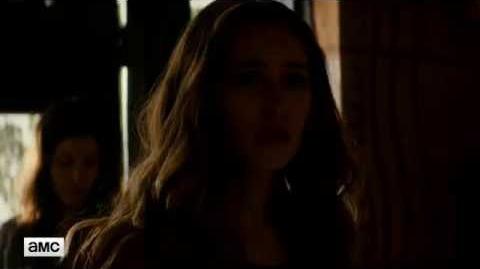 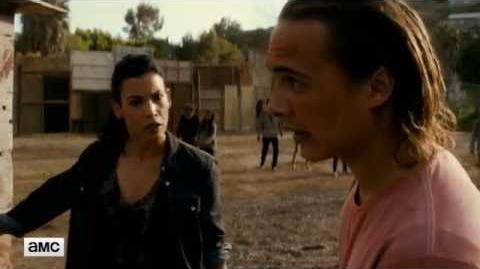 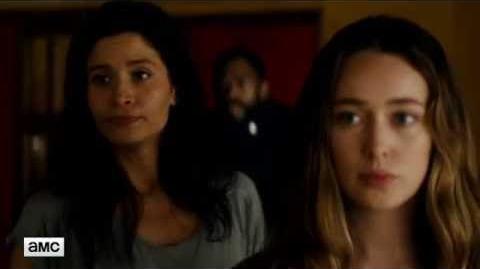 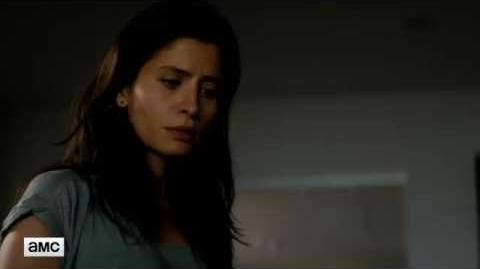 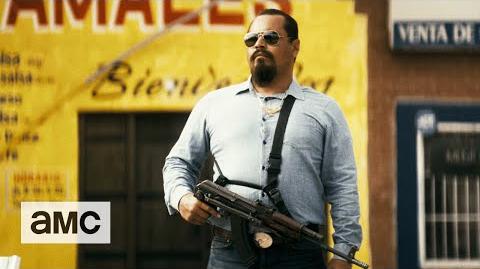 Retrieved from "https://fearthewalkingdead.fandom.com/wiki/Los_Muertos?oldid=25281"
Community content is available under CC-BY-SA unless otherwise noted.