Start a Wiki
The Los Angeles Fire Department is, as the name suggests, the fire department for the city of Los Angeles, California.

Founded in 1886, the LAFD employed over 4,000 members and was the third largest fire department in the U.S. by the time of the global outbreak.

The LAFD was first seen responding to a crash on a Los Angeles highway, alongside paramedics and members of the California Highway Patrol.

It can be assumed that the fire department suffered from mass desertion as there appears to be no fire department response in the wake of the riots that occurred in LA. Fires are seen burning out of control all over the city.

It is also possible that the LAFD suffered from large scale casualties responding to these fires early in the crises, where it is concievable that infected individual's trapped in these buildings attacked and infected/devoured the fire crews. 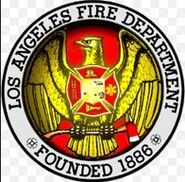 Add a photo to this gallery
Retrieved from "https://fearthewalkingdead.fandom.com/wiki/Los_Angeles_Fire_Department?oldid=29918"
Community content is available under CC-BY-SA unless otherwise noted.