At the beginning of the outbreak, Los Angeles is operating in a state of 'business as normal,' despite there being outbreaks spreading throughout the city. Other than rumors, the general population of the city seem unaware of what is happening. Some citizens, such as Madison Clarke's neighbor Susan, witness zombie activity, as well as Madison's son Nick and a junkie, who also witnesses a zombie attack in a drug den situated in an Abandoned church.

By the end of the second day, there are signs that the outbreak is starting to spread and be noticed by people within the city. In one incident that went viral via the internet, a man who had been involved car crash on a highway off-ramp attacks an EMT who attending to him. Several California Highway Patrol officers unsuccessfully attempt to subdue the man with their batons. Since this proved ineffective, they are forced to open fire. Other than being staggered and forced to one

The riot continue to rage in the middle of the city into the early hours of the following morning, allowing the outbreak to spread even further. Heavily armed units of the LAPD are seen shooting undead doctors and patients at a hospital which has been overrun. A massive blackout plunges the entire city into darkness, revealing fires in the streets and neighborhoods as even more panicked people try to flee the city. The next day, the Governor of California signs a state executive order mobilizing the National Guard and they proceed to enter the city to aid the ailing LAPD.

The National Guard proceed to deploy search-and-destroy squads to find and destroy the infected. They have also set up twelve safe zones throughout the city and suburbs. Outside the zones, many infected and uninfected corpses lay in the streets, indicating that the military is indiscriminately executing both the infected and civilians outside the safe-zones- possible due to them believing that the uninfected had been exposed. Fires rage throughout the city. The civilians within the safe zones are assured that the National Guard are on the offensive, but this is untrue.

Unbeknown to the civilians in the safe zones, the situation in Los Angeles is spiraling out of control, and the military prepares to initiate "Operation Cobalt," a plan to evacuate all of its personnel from the city and humanely terminate any survivors. A refugee Centre has been set up in a nearby community college, with doctors treating the wounded and National Guardsmen rounding up civilians at risk of infection. It is also revealed that, in a fit of panic, the military locked up at least 2,000 infected and uninfected people in one of their medical compounds situated inside the Los Angeles Memorial Sports Arena, dooming all the uninfected inside.

By day fifteen of the outbreak, Los Angeles is shown to be in ruins. There are no man made lights to be seen in the city. Several buildings and city blocks, including iconic skyscrapers like One California Plaza and the Paul Hastings Tower, are on fire. The streets are either empty or full of infected, partially due to Daniel Salazar releasing those trapped inside the sports arena. The highways leading out of the city are jammed up with hundreds of abandoned cars, and the city is completely devoid of any man-made light. With Operation Cobalt in effect and the last major refugee center overrun by the infected, the military officially abandons the city. As the survivors drive through the city on the way to Strands house, they fine the streets empty and see tendrils of smoke marring the skyline. 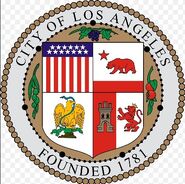 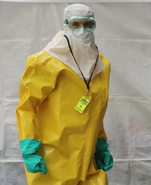