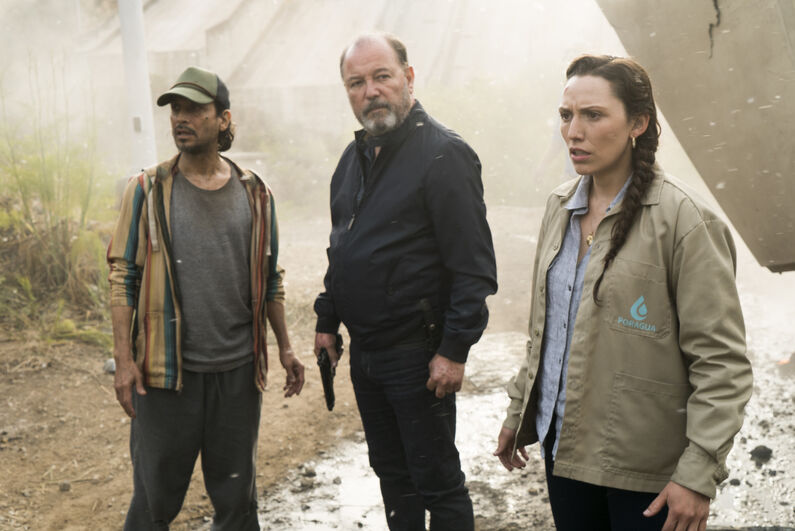 "La Serpiente" is the eleventh episode of the Third season of Fear the Walking Dead. It aired on 17th September 2017 on AMC.

Madison, Strand and Walker drive to The Dam in the water tanker. They encounter a herd of Infected on a highway near a number of wrecked vehicles. Strand throws a beeping alarm out the window to draw the mass of Infected away from the road, allowing the truck to pass unharmed.

Madison, Strand, and Walker pull into a gated area, a scrap yard containing hundreds of scrap cars. Strand pushes a VW beetle aside to reveal a sewage grate. Walker does not like the idea of heading underground, but Madison reassures him this is the fastest way. The group descend into the tunnels.

Strand tells Madison that Daniel is at the dam but that Daniel is angry with him for misleading him on Ofelia's whereabouts. Strand breathes a sigh of relief when Madison informs him that Ofelia is safe at the ranch. As they head down the tunnel they run into Walker who is fleeing from a group of Infected.

Strand finds the symbol and points out the pipe that leads to the dam. As they crawl to their destination, they run into an Infected blocking the way. Madison kills the Infected with a hatchet then hacks its body into pieces to unplug the pipe, but as she does so the blocked up sewage is released and gushes over them.

Daniel, Efrain and an injured Everado race down the road in a water tanker with an angry mob in pursuit. Daniel shoots at the mob, and Efrain tells him to stop.

Daniel's group reaches the dam and shuts the gate behind them. Efrain admonishes Daniel for shooting at the crowd. Daniel sees Strand, Madison, and Walker emerging from the tunnel. Madison tells Daniel that Ofelia is alive and that Walker saved her in the desert. She tells him they've come for water.

Daniel takes Madison's group to Lola's office. They wait outside as Daniel speaks to Lola. Madison assures Walker, Daniel will help them.

Madison asks Lola for water in exchange for resources such as cattle or guns. Lola refuses to make a deal and orders Madison to leave the next morning.

Later that night, Lola asks Daniel if he’s planning to go live with Ofelia. Daniel vows to fulfill his promise to Lola by staying at the dam, he believes Ofelia is better off without him.

Walker tells Strand that he intends to kick Madison, Alicia, Nick and the ranchers off the ranch since Madison has ruined their chance to trade for water.

Madison speaks privately to Lola and correctly guesses that Lola fears reprisal from her people if she gives water to "gringos." Lola offers to let Madison and her family live and work at the dam.

Strand helps Efrain treat Everado's wound. Efrain criticizes Daniel for attacking the people, who he believes are merely thirsty and scared. He rejects Daniel’s belief that people are plotting to overtake the dam and maintains that Lola should release the water to everyone.

Daniel thanks Walker for saving Ofelia and asks what she does at the ranch. To Daniel's dismay, Walker tells him she is a soldier. Walker explains that she poisoned their enemies and saved many lives. "By taking [the lives of] others", Daniel says.

Madison vents to Strand about her predicament. Strand asks what she wants. Madison says that she wants to keep living at the ranch.

Lola picks a neighborhood for the next water distribution run. Daniel worries that the area is too hostile, but Lola argues that giving the residents water will help avoid further resentment. Lola insists the people will eventually appreciate what she is doing, but Daniel fears he lacks the guns to protect her from those who are disgruntled. There is a clear divide between them on how the dam should be operated. Lola tells Daniel that he must leave if he cannot agree to run the dam as she thinks it should be.

Strand carefully watches Lola’s crew prepare a tanker for the water run. Daniel senses that Strand is plotting something and offers to look the other way if his scheme benefits them both.

Walker leaves the dam and warns Madison that he is kicking out the ranchers.

Daniel tells Madison that he plans to stay at the dam to protect Lola.

Madison joins Strand at the gate to head back to the ranch. Strand tells Madison to stay away from the water tanker. Moments later it explodes, blowing open the gate. Infected flood inside. Lola’s men kill the Infected with help from Madison and Strand.

In her office, Lola asks Daniel how many guns and munitions they will need to protect the dam. Daniel writes down a number. Madison agrees to provide them with the required armaments in exchange for 10,000 gallons of water a week until the rains come. Madison suggests they make the first trade in five days at the trading post in Mexicali. Lola also demands that Ofelia show up at the exchange.

Daniel sends off Madison and Strand in a water tanker provided by Lola. As they drive back to the ranch, Strand admits he rigged the explosion.

Madison and Strand spot Walker on the road. They stop for him and Walker smiles, then gets into the cab.

The gallery below is automatically generated and contains images in the category "Images from La Serpiente". Images added to that category turn up in the gallery after a short time.

Retrieved from "https://fearthewalkingdead.fandom.com/wiki/La_Serpiente?oldid=29126"
Community content is available under CC-BY-SA unless otherwise noted.