La Manas is a highway gang that was operational in Mexico. According to Sofia they are one of the most feared gangs in the area.

After the infection hit and the civil authorities fell in Baja California, La Manas took advantage of the lawlessness in the state. They began to rob and murder survivors as they roam the highways. Owing to their behavior, and as mentioned by Sofia, they are to be avoided while traveling to Tijuana. Unfortunately, Nick did encounter them and they immediately began to fire upon him. During their second encounter with Nick, two of the La Manas drug runners, including their leader Gael, were killed by a zombie horde on the highway. The third member escaped in the Jeep, leaving his status and location unknown. 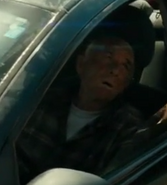 Add a photo to this gallery
Retrieved from "https://fearthewalkingdead.fandom.com/wiki/La_Manas?oldid=30379"
Community content is available under CC-BY-SA unless otherwise noted.