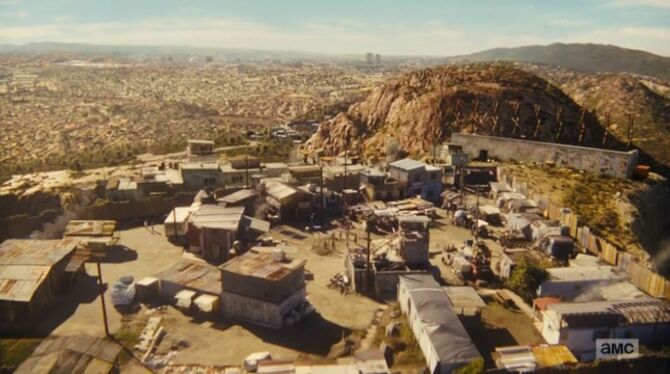 "La Colonia"
La Colonia on the day Nick arrived (as seen from the air).

A settlement in Baja California, distinguished by having a "Wall" (more of a Moat really) of the Infected to deter attackers.

La Colonia, which translates as "the colony", also known as Colonia el Porvenir ("colony of the future"), is a location and a community of survivors in AMC's Fear The Walking Dead. Luciana and Alejandro are among the survivors who live in this community. La Colonia is located either in or near the city of Tijuana, Baja California, Mexico .[1]

La Colonia get some supplies, notably water, from the Los Hermanos gang who are within a 1/2 day's walk of the community; they trade drugs for supplies - leveraging Alejandro's medical knowledge and Nick's experience as a drug user.

It appears to be guarded by armed residents using watch towers, as well as having sections protected by a chain link fence. It contains a hospital/medical center, market, several houses and a fenced off area (accessed by a bus) that is full of Infected. This is known as the Wall, full of The Infected, a barrier to deter attackers.

It abandoned, taken over briefle by Marco and his gang, and then over-run at the end of Season 2a.

The survivors headed north where they were attacked by the Militia Man and his gang at the border crossing.

Retrieved from "https://fearthewalkingdead.fandom.com/wiki/La_Colonia?oldid=29022"
Community content is available under CC-BY-SA unless otherwise noted.