Fear the Walking Dead Wiki
Register
Don't have an account?
Sign In
Advertisement
in: Characters, Females, American,
and 6 more

Another Day in the Diamond (Flashback)

June Dorie is a major character in the fourth and fifth seasons. She is portrayed by Jenna Elfman.

June is described as "capable", and she's living on her own at the beginning of Season 4. She is guarded when she first meets Madison and her family, and, apparently, has good reason to be. It's implied in the official bio that she is on her own by choice.

All that is known of June's life before the apocalypse is that she was a nurse in an emergency room and intensive care unit. It is possible she lived in the state of Texas.

June was discovered by Madison and her group when they were on a run for supplies. The town was already cleared by The Vultures. She tried to take Madison's keys, but instead join them to go back to Dell Diamond Baseball Stadium.

June stays at the stadium for some time and prepares them an infirmary. 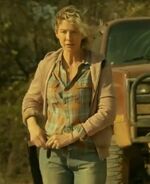