Fear the Walking Dead Wiki
Register
Don't have an account?
Sign In
Advertisement
in: Citation Needed, Males, Characters,
and 7 more

Shot in the head by Nicholas Clark.

Jeremiah Otto Sr. was a major character and a secondary antagonist in a first half of the third season, after appearing as a minor character in the second season. He was portrayed by Dayton Callie.

Before the apocalypse, Jeremiah lived in the United States, probably near the border. He was married twice and has two sons named Jake and Troy. He was a founding member of the group of survivalists, also known as "preppers", who were preparing for what they saw as the inevitable fall of government and created what became the camp at Broke Jaw Ranch. They were prepared for many things, but not for the dead to rise.

Jeremiah is wandering somewhere along the Mexican-American boarder with his assault rifle when he spots Ofelia wandering in the desert. He opens fire on her until she hides behind a tree. He approaches her and aims his gun at her, asking Ofelia to hand over her knife. He then proceeds to capture Ofelia.

Jeremiah with Nicholas Clark and Madison 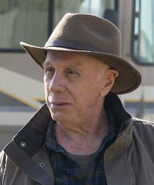