Between "Ouroboros" and "Blood in the Streets"

Jake Powell was a major character in the Flight 462 web-series from AMC's Fear The Walking Dead. He is portrayed by Brenden Meyer.

Jake, while on the plane ready to lift off catches the attention of a woman boarding and taking her seat in front of him. Jake receives a text from his mother regarding travel arrangements. Jake calls her to discuss the flight, and when a distressed passenger asks the flight attendant if the flights are being grounded, Jake asks his mother about the rumors that flights are being grounded. His mother insists that she'll drive to the airport and pick him up if needed and that there is nothing to worry about. Jake hears a scream from over the phone, which his mother explains is a neighbor who is upset. She tells Jake that she loves him and hangs up, while Jake is left with a concern about his mom. Jake continues to say "mom" after she hangs up, then the woman in front of her shuts the blind to the window Jake is looking out of.

Jake survives the plane crash but is badly burned and being tended to by Alex. Alex protects Jake at any cost even killing the two other survivors with them because they wanted to kill Jake, claiming he was dead weight. Later, Jake and Alex are found by Daniel, Nick, Alicia and Chris when Alex saves Daniel from one of the dead, and taken back to Victor Strand's ship, Abigail. Strand refuses to allow Alex and Jake on board but seems to give in Madison and Travis' protests by allowing them to be towed behind the ship in their raft. However, Strand comes out later and hacks the rope attaching them to the ship, leaving them stranded in the middle of the ocean as they continue on their way without them.

Alex is revealed to be a fellow captive aboard Connor's ship and reveals to Travis that Jake's conditioned worsened after they were cut loose by Strand and that he had requested her to kill him as a mercy killing. Alex also revealed that she was the one who told Connor's group about the Abigail and the names of everyone on board, specifically requesting them bring Travis to her as he was the one who put them on the raft in the first place despite the conflict to let them on board. Since his brain wasn't destroyed, it can be assumed that he turned after he was thrown overboard. 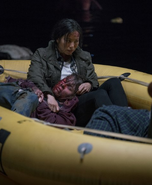 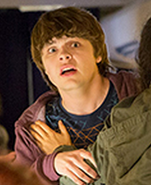 Retrieved from "https://fearthewalkingdead.fandom.com/wiki/Jake_Powell?oldid=30714"
Community content is available under CC-BY-SA unless otherwise noted.