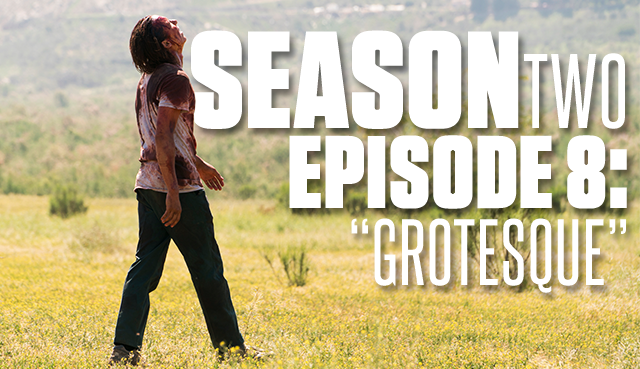 "Grotesque" is the eighth episode of the second season of Fear the Walking Dead. It aired on Aug 21 2016 on AMC.

Nick has left the Abigail Family Vineyard and, with Sofia's help sets out for Tijuana. We learn about his journey there and some details about his character. We also get to meet some new characters and a new group of survivors.

Nick wakes up on the floor in a house in Baja California next to two dead bodies. He finds Sofia, a member of Celia Flores' extended family. She’s going south with Juan, a boy of about ten; she tells him to head north if he wants to join up with others like Celia.

Sofia gives Nick a backpack full of food, a 2 litre plastic bottle of water and points him north towards the road to Tijuana.

Nick treks through the hills of Baja and reaches the highway. A sign indicates Tijuana is 100 kilometers away.

Nick comes across several abandoned cars and searches one for supplies but finds nothing. He gazes at one car in particular for a while -- the windshield is covered with blood and riddled with bullet holes.

In a flashback, Nick plays thumb war with his girlfriend Gloria at a rehab facility. She urges him to rehearse an upcoming meeting with his parents to avoid a longer stint in rehab. She role-plays his father and asks him to share his feelings after serving three weeks in rehab. Nick blames his father for being absent in his life.

Back in the present, Nick finds an empty house and sets up camp for the night. He leaves his fire burning and while he sleeps, a woman, a mother with a six year old girl, attacks him with a bat and screams at him until he leaves. Nick tries to get his backpack and water but she chases him out, hitting him several times wit the bat.

Nick trudges down the road without food or water. He spots a water bottle in a car, with only a little water left at the bottom. He dodges an Infected woman in the driver’s seat and snatches the water. He also takes a radio from the dashboard. When he sees a Jeep approaching, he ducks behind the car. Three outlaws get out of the jeep and kill a man in one of the cars who is delirious and begging for water. They hear Nick’s radio crackle and chase him for a while but Nick escapes.

Nick walks through the desert and becomes desperate for water and food, he pounds a cactus leaf and eats the flesh. He gags and vomits it up. Desperate, he urinates into his hands and drinks it.

Nick huddles by an old van at night. In a flashback, Nick and Gloria wait in the hallway of the rehab facility. They see Gloria’s well-to-do parents check in at the front desk. Madison arrives and waves at Nick.

In a private room, Madison tells Nick why his father, Stephen Clark, isn’t visiting. He has died in a head-on collision. Gloria looks in the room and sees Madison hugging Nick.

In the present, Nick wakes up to two dogs barking in his face. One dog bites his leg. He scrambles on top of the van. The dogs leave him to attack a herd of Infected that is heading toward the van. The herd devour the dogs.

Nick rests on top of the van and inspects his leg wound. The herd hear him grimace and swarm the van. Nick is terrified by their sudden interest in him and prays. As if in answer to his prayer the herd are distracted by a car horn and the sound of gun shots in the distance. They shuffle off toward the sound. Nick crawls off the van and eats meat from a dog carcass. He removes the belt from a maimed Infected, straps up the bite on his calf, covers himself in Infected blood and walks with the herd. While he walks in the heat his vision blurs and he hallucinates the Infected talking to him.

The herd travels down a road. The three outlaws Nick encountered before find the herd and start shooting the Infected. Nick stays with the herd as it advances on the men, several of the Infected are killed right next to him. Gael sees Nick within the throng and, spooked by Nick’s glare, he freezes and the herd take him and one of the others. The third drives away.

Luciana and two men watch Nick through binoculars as he travels down the road with the herd. They seem to have mistaken Nick, initially, for someone else they know who walks with the dead. They see Nick collapse in the road. One of the men, Francisco wants to save him, but Luciana refuses.

Nick, lying in the road, remembers using heroin with Gloria in the choir gallery at the Abandoned church in Los Angeles from the first scene in the episode "Pilot". Back in the present, rain begins to fall. Nick, woken by the rain, is washed clean of the Infected blood and drinks in the rain.

Nick hobbles into a town and finds a drug store. He searches a pharmacy for medication to treat his leg wound but it's already been looted and he finds nothing.

In a barber shop, Nick wraps his wound with duct tape. Luciana and Francisco walk in and ask if he’s infected. In a mixture of Spanish and English Nick assures them it’s just a dog bite. Luciana invites him to come with them.

A man named Alejandro treats Nick’s wound in an infirmary and tries to give him some advice about not seeking death. Afterwards, Nick walks outside and finds himself in La Colonia. The streets are alive with ordinary human activity, bustling market stalls and children playing football.[1]

The outlaws see Nick and try to shoot him

Nick collapses on the road to Tijuana

Nick finds the road to Tijuana

Nick and Gloria in the Abandoned Church

Nick hides on the roof of an old vehicle from the dogs and, later, the herd

Nick rests in the shade of an old vehicle

An infected woman in the herd

Frank Dillane on the old van 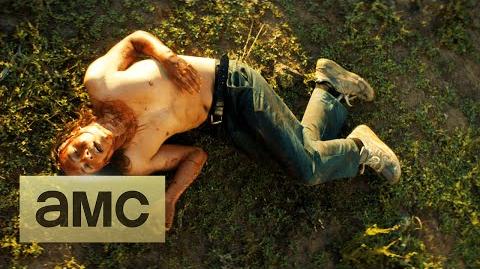 Retrieved from "https://fearthewalkingdead.fandom.com/wiki/Grotesque?oldid=21677"
Community content is available under CC-BY-SA unless otherwise noted.