Leg amputated and later dies from septic shock. Shot in the head by Liza with a captive bolt humane killer to prevent reanimation.

Griselda Salazar was a recurring character in the first and second seasons. She was portrayed by Patricia Reyes Spíndola.

Strong, big hearted, quiet and deeply religious. She trusts only two people on the planet - her husband and her daughter. She'd die for either one.

"So Close, Yet So Far"Edit

As the outbreak began, Griselda was residing in her home in downtown Los Angeles with her husband and daughter, Ofelia Salazar. As the riots began to spiral out of control, Griselda remained in her shop as Daniel Salazar locked it down, but not before allowing Travis Manawa, Christopher Manawa, and Liza Ortiz to seek refuge inside. As rioters looted stores and burned cars in the streets, Griselda often prayed for the safety of her family and friends.

Griselda, along with her husband and daughter, in addition to Travis, Chris and Liza are inside their business. After Chris notifies the five that the walls are burning, they quickly leave as rioters enter their shop. As they try to make their way to Travis' truck, the police unleash a high-pressure hose on the rioters on the scaffolding, causing it to collapse and pin Griselda down. The five manage to lift the collapsed scaffolding up to get her out and find that she has sustained an injury on her leg as a result of the collapsed scaffolding.

Griselda continues to recover from her injury in bed under the care of her family and Liza. However, due to the limitation of medicine and professional help, her foot is drastically suffering from the injury. Fortunately for the Salazars, Bethany Exner arrives in the safe zone with other medical personnel and is able to assess each survivor in need of assistance. Dr. Exner makes arrangements to have Griselda and Daniel transferred to a medical facility for surgery. Later that night as Griselda rests, the National Guard comes to remove her for evacuation. However, the soldiers do not allow Daniel to come along and take Nick instead. Not fully trusting the National Guard and worried about Griselda, Liza chooses to follow them with Dr. Exner in the medical convoy.

Griselda went through surgery and her foot had to be amputated by Dr. Exner due to it being so damaged. She is found by Liza in a recovery ward, though she is suffering from septic shock and nothing can be done to save her. As Griselda's health begins to drastically decline, she mumbles about the Devil and what she is responsible for, accepting her upcoming fate as resolution for what she did in her past. She then dies once the swelling in her brain cuts off all blood supply. Before Dr. Exner can shoot Griselda in the head to prevent reanimation, Liza chooses to be the one to put Griselda down.

In this episode, Griselda appears as a hallucination that haunts Daniel while he is being detained. She convinces him to escape and tells him to end his suffering and pain and to destroy the Abigail estate. When Daniel begins to burn the compound, Griselda appears to him again, alongside all of the people that Daniel once killed, inviting him to join them in death.

In a flashback, Griselda is sweeping in her house when Ofelia returns from vacation in Rosarito. Ofelia offers to take over for Griselda as she starts peeling vegetables at the table. They start talking about love and why Griselda married Daniel and eventually the conversation ended with Griselda informing that family is everything and she has done everything for her daughter and family. 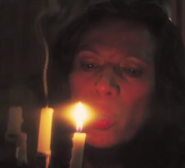 Put down by Liza
Add a photo to this gallery

Retrieved from "https://fearthewalkingdead.fandom.com/wiki/Griselda_Salazar?oldid=31511"
Community content is available under CC-BY-SA unless otherwise noted.