Gonzales is a LAPD Uni, short for Uniformed Officer and is a character in AMC's Fear The Walking Dead. She first appears in "So Close, Yet So Far", and is portrayed by an unknown actress.

Nothing is known about Gonzales before the outbreak. It can be safely assumed that she lived in Los Angeles. At some point in her life, she joined the Los Angeles Police Department.

In the episode "So Close, Yet So Far", Gonzales is stationed at the scene where an infected homeless man was killed by police. A crowd forms who protest against what they see as an unjustifiable shooting of an unarmed man by the police. Chris is part of this crowd and is filming the events when Travis and Liza come to find him.

As an infected woman stumbles towards Gonzales, she draws her gun and orders the woman to halt. The woman ignores Gonzales' orders, prompting her to shoot the woman. Gonzales' actions, shooting an unarmed young woman who would ordinarily be seen as harmless, show that this LAPD officer at least (and probably more than just this one officer, given the homeless man that had already been shot at that scene) was aware of the threat presented by individual infected people at a time when the general population didn't know there was even a problem.

This shooting starts a panic among the protesters and, with the arrival of additional armed officers, sets off the riot in downtown Los Angeles on or near 7th street that traps the Manawa family downtown and prompts them to ask for shelter at Salazar's Cuts. 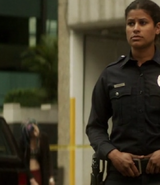 The LAPD officer has to shoot the infected woman several times before she goes down.