Gloria, also known as "Glo", is a character in the first season. She is Nick’s girlfriend. She is portrayed by Lexi Johnson.

Gloria lived in Los Angeles. Gloria is a drug addict and dated Nicholas Clark, another addict. They apparently met in rehab ("Grotesque"), where they formed a relationship.

During the day, Gloria and Nick Clark went to the Abandoned church and took drugs. Gloria died from a drug overdose while Nick was sleeping and turned. After turning, Infected Gloria presumably killed a man (off-screen) by biting his neck, and is later seen to feast on another (Druggie). At some point, Gloria was stabbed and the knife is still protruding from her chest, jammed between her ribs. While she is devouring the second man, Nick Clark approaches, searching for her in the church. When he pats her on the shoulder saying they have to get out of the church she turns to face him. He quickly recoils when he realizes that she is feeding on the corpse of a man. Infected Gloria looks at Nick and approaches him, Nick runs from the church.

Gloria appears in flashback in this episode. She and Nick are playing thumb war in a living room of a rehab clinic. Gloria is giving Nick advise on how to approach his parents and how it will cut down on his stay in rehab. She takes on the role of a therapist for Nick to vent his frustration about his father.

Later, as Gloria is meeting her parents, she hears Nick cry out in despair after hearing about the death of his father. She leaves her parents, goes back down the corridor and watches him through the glass door. She then, holds her necklace about to cry. That was her boyfriend so, she cared about Nick about as much as his father did before he died but, unfortunately Gloria died from Drug Overdose. And unfortunately stabbed in the heart after she had turned but, Nick finds her dead eating some corpse face to pieces. But, she never had her brain damaged so, she stayed undead.

Gloria, Before and After 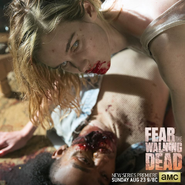 Nick hallucinates Gloria as being part of the herd in "Grotesque"

Gloria's parents arrive to visit her in rehab 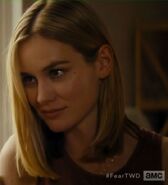 Gloria, looking through the glass door at Nick and his mother

Nick and Gloria in the Abandoned Church, before she dies