You can subscribe to the podcast using iTunes - and other programs as well I'm sure; they're all free

The podcast description runs as follows:

"Thousands of calls for help flood the airwaves. Most will go unanswered, but not all will go unheard. Listen in to hear what people are broadcasting over the air as society breaks down."

The podcasts available are:

Spanning over nine instalments, with each being about a minute, this podcast is about a husband and wife named Devon and Rachel and their survival. They were at separate locations at the start of the apocalypse, with Rachel reaching their relatively secluded cabin at an undisclosed location- (the cabin is in sight of at least one other house, home to the Larsen family).

Their story starts out humorous, with them joking about how what is happening with the Infected would one day be a part of a pop quiz, and how they would have their own chapter.

The mood goes down hill as the conversation spans several days. Rachel expresses disbelief that Devon had to kill some people that attacked him and she then hears indicators that someone is listening to their conversation. Then Devon's panic when Rachel spots people she doesn't know (a mother and daughter team) at the other cabin.

Devon expresses anger when an unidentified man comes on the radio claiming to be in Rachel and Devon's cabin while Rachel is at the other cabin. The unidentified man tells Devon not to bother to come to the cabin as nothing will be left for him.

When Rachel makes contact with Devon again, she and the people who were at the other cabin have subdued the unidentified man. Rachel can't understand why Devon is panicked by the fact that she is around other people, claiming she "is safe, she is with people." She is shocked when Devon tells her to cut the unidentified mans throat.

On the sixth day, Devon is contacted from Rachel's radio by a woman (Sam), who claims she was in the neighbouring cabin and was found by Rachel. She says the unidentified man died and reanimated and they put him down. She repeats that Rachel is "on watch, and I cant get her" when Devon asks to speak to his wife. Devon threatens to kill her if she has done anything to his wife.

On the seventh day, when Devon and Rachel next speak, Rachel expresses disbelief that Devon would threaten Sam. Devon justifies himself, saying that Rachel hasn't seen what he saw and that the men he killed previously had tried to kill him. Rachel maintains her belief that there is safety in numbers. Devon tries to convince Rachel that Sam and the other woman she is with will turn on Rachel and that Rachel needs to 'take care' of them. Rachel says she understands, but there is a note of apprehension in her voice- as if she is more scared of Devon than of the people she has found.

On the eight day, Sam contacts Rachel via the radio. She says she ran into Devon outside St. Mary's, that she was sure it was Devon because she recognised him from a photo Rachel has. Sam says Devon recognised her as well and that he drew a knife on her. Sam admits she shot at Devon.

On day nine, Devon contacts Rachel. Rachel says she is leaving and Devon begs her to wait, claiming she didn't understand what he had to do to reach her. She coldly tells him "that's on you," and that she has to look after her group. They are leaving for somewhere safer, and they won't tell Devon where it is, she also says that the cabin is his and he can do what he wants with it. After Rachel cuts out, Devon says he will never stop looking for her.

As the name suggests, this segment deals with a broadcast by a conspiracy theorist. He claims to have found the cause of the outbreak. He claims that it was an attempt at population control by the government and that they lost control. He states that he keeps seeing the word NOAH (Operation N.O.A.H), and that it means the government has fled "to the skies" for safety. In a rage, he claims he is going to seek revenge. He angrily yells "Who is with me?"

An American man wanders into a radio station in Tijuana. He finds a bottle of scotch and a working mic and he begins to broadcast. His broadcasts is a combination of music, drunk rambling on what led him to this point and 'survival' tips, some of which appear questionable- such as lighting a bonfire because the infected are attracted to fire, even though he asks who was stupider- his brother for suggesting it or him for lighting it up? (This implies that the DJ lost his brother in an out of control fire).

In the second installment, the DJ brings on a 'guest' who he names Bob-- an Infected. 'Bob' is restrained by ropes and the DJ apologies that he didn't ask 'Bob' his real name as they had only meet ten minutes before. The DJ takes on the role of an interviewer, with 'Bob' being the interviewee. The DJ asks what it is like being an infected and does 'Bob' remember anything about his former life. The DJ seemingly gets angry when one of 'Bobs' snarls is mistaken as 'Bob' mentioning the DJ's brother- a topic they agreed not to discuss. At the end of the 'interview' the DJ shoots 'Bob' and then signs off.

A Park Ranger stationed at Shuteye Peak in the Sierra Nevada mountain range broadcasts over his radio. He recommends to whoever is listening to evacuate to a safer location. He states that his co-worker went out to check another station, and hasn't returned. He has witnessed the aftermath of Operation Cobalt and the effect it has on nature-- Yosemite National Park and the forest of the Sierra Nevada mountain range are on fire. The Park Rangers estimates that they will both be gone within a week. He laments that "we had to rope nature into our end." He states he is going to leave the station in the morning and he will leave his radio on until then in case anyone wants to respond.

A man broadcasts a message to Jack, wondering if he is still open to 'trade.' He says he is on his way to Panama to meet up with his daughter and her husband. He needs several crew to help man his boat- one for the engine and at least two others to help with deck work. He tells Jack that he has plenty he would be interested in.

A man living in Portland, Oregon, transmits a message to (apparently) no one in particular, until it becomes apparent he is talking to his dead partner. He talks about getting on his boat and sailing to Tokyo, how he has enough water and fuel, but food would be a problem, but he isn't worried because he went fishing when he was younger. He seems to express doubts about the plan because he remembered how his partner dissuaded him from quitting his job and moving to Europe, and how he/she was always to more level headed of the group. 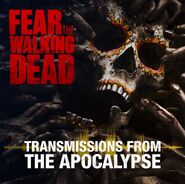