Unfortunately, it doesn't look as if Passage will tie-in to the main series in the way Flight 462 did, but he left the door open for links to the mini-series in the future.

A woman in a bloodstained Hazmat suit cautiously navigates a seemingly-abandoned military camp where a dead soldier is slumped up against a truck and a burned out tent is still smoldering. The hazmat survivor catches sight of an injured woman hobbling through the camp when she is suddenly attacked by two zombified soldiers, but is able to take them down with a knife. Meanwhile, the woman briefly hides behind a vehicle before running off once again. Presumably hiding from the woman in the suit.

Aware of the fact that the injured woman, Gabi is spying on her, Sierra dresses an Infected in the Hazmat suit and then ambushes Gabi. She wants to know why Gabi is following her. Gabi admits to following Sierra and says that it was because Sierra can kill the infected, and she (Gabi) couldn't. Sierra then uses Gabi as a shield so she can take down the infected dressed in the Hazmat suit. Sierra begins to walk away, but Gabi pleads with her not to leave. Sierra enquires as to how Gabi injured her leg. Gabi shows her that she's not bitten, and says she twisted it on the road.

Gabi and Sierra enter one of the watchtowers of the military camp and survey the damage. Sierra cleans her knife in the leg of her suit and tells Gabi she has nowhere to go. Gabi asserts that she does. Sierra isn't convinced Gabi does know a safe place as she would be there already. Gabi says they head south, towards Mexico. Sierra shoots down the idea, saying that the border is crawling with Infected as when the infection hit people tried to head both north and south. Gabi assures Sierra that there is a tunnel under the border. Gabi's boyfriend was border patrol and he sealed the tunnel after the infection hit and then went to check it out, with Sierra noting that he hasn't returned. Gabi persists- saying that Sierra needs a safe place and that she (Gabi) needs help. Sierra reluctantly agrees, but reminds Gabi that she (Sierra) doesn't need Gabi.

Gabi and Sierra are trudging down a road towards the border. They seem to be in the middle of a discussion, but Sierra keeps pulling ahead and tells Gabi to keep up. Sierra admits to being from Los Angeles, that she left when the military came, but that it didn't matter because "the bombs followed us." Gabi tells Sierra that "you are not the only one to lose someone." Gabi says that she lost her sister because "I couldn't stop them." Sierra unsheathes her knife and tells Gabi to go for the eye, temple or base of the skull, but be careful not to hit the skull.

​​Gabie and Sierra enter a construction site. Sierra is wondering how far it (the tunnel) is, and Gabi assures her that it isn't far. They round some construction equipment and are confronted by a chained up Infected. Gabi freezes, but Sierra urges her on, telling her that now would be a good time to try out her skills with the knife. Gabi raises her knife, but before she can strike, a gunshot rings out and hits the infected in the head.

The shooter of the chained infected is revealed to be Colton, Gabi's boyfriend. Colton and Gabi embrace, relieved to have found each other. Colton admits he thought he had lost Gabi "when the bombs fell." He enquires after Gabi's sister and Sierra. Gabi says Sierra is the reason she reached the Construction Site alive. Colton thanks Sierra and Gabi says her sister is dead because they waited too long. As Sierra picks up her dropped knife, Gabi and Colton embrace again, while Gabi says she and her sister waited because she thought Colton was coming for them.

Colton brings Sierra and Gabi to the tunnel and tells Gabi to go down first. She seems concerned about Sierra, and Colton says he will send her down next as he has to go down last in order to close the tunnel behind them. After Gabi enters the tunnel, Colton faces Sierra and tells her that he is sorry, but he can't take the chance that she will tell anyone else about the tunnel. He raises his gun to shoot, but Sierra reacts faster than he thought she would and she stabs him in the leg. She climbs down into the tunnel while he is recovering.

Sierra descends the ladder into the tunnel where she is confronted by Gabi while Colton keeps shouting from above that the tunnel is unsafe. Sierra tells Gabi the truth-- that Colton tried to kill her. She also tells Gabi that Colton abandoned her and had no intention of coming back for her. Sierra says they have to leave and starts down the tunnel. Gabi stares at the circle of light above and listens to Colton for a moment longer, before turning just as Sierra hits a trip wire.

​​In the aftermath of the explosion, Gabi sits in the dust, her ears ringing. Sierra calls out her name, telling Gabi to follow the sound of her voice. Sierra is bleeding from a head wound, but seems to be more concerned with Gabi, who is having trouble hearing. Slowly, Gabi begins to crawl along the ground towards Sierra, and is illuminated by a light from behind. Colton emerges from the gloom and grabs Gabi.

Colton roughly pulls Gabi and holds her by her face, repeating "Didn't I tell you to wait for me?" They hear Sierra getting up and making her way further down the tunnel. Colton calls out for her to wait and begins to follow her but falls due to his injury, but Gabi tells him to let her go. Colton says he can't, that he has to get to her before THEY do.

Sierra limps around the tunnel, coming across a well lit area full of tools and pipes. She hear Colton talking to Gabi behind her, and she frantically searches for a place to hide, almost tripping over tracks built for mining carts. Colton and Gabi are searching for Sierra and Colton says "They came from down here." Sierra hides in a mining cart, and is attacked by an infected.

Gabi and Colton are walking through The Tunnel when an unknown voice calls out. Colton hides Gabi and then jogs to meet an unknown man in a Border Patrol uniform. He lies about knowing what set off the trip wire, claiming that whoever it was must have snuck in behind him. At the same time, Gabi grabs a knife off a nearby supply shelf. The Boarder Patrol guard believes Colton and walks off. Colton makes his way back to Gabi and she asks him why he lied. He repeats that no one could know about the tunnel, because its not just a tunnel, its a bunker and that they could survive down here. Gabi raises the knife towards Colton and states that he was never coming back for her.

Colton tries to convince Gabi that he wont hurt her and that she needs him. Gabi responds that she doesn't believe him and that she will be fine on her own. Colton, seemingly angry, asks her if she thinks THEY will let her go alive. Gabi makes a run for it and Colton drags her to the ground, where a brief scuffle ensues. Gabi slashes at Colton with her knife, but Colton scuttles away, drawing his gun.

A mining cart rattles down the rails, drawing the attention of the Unnamed Border Patrol Guard who is searching for whoever set off the booby trap. He goes to investigate as a Second Unnamed Border Patrol Guard approaches. When he rips the cover off the cart, an Infected is shoved into him by Sierra, who then jumps over him in the confusion, smashing the second guard over the head with a bat. Sierra is about to climb a ladder to the surface when she hears Gabi calling her.

Colton holds his gun on Gabi and tells her "You're not worth it, babe" and prepares to fire. Sierra comes up behind him and starts to strangle him with a wire, forcing him to drop his gun. Gabi looks on in shock as they struggle on the ground. When Colton reaches for his gun, Gabi lunges forward and stabs him in the chest. As Sierra and Gabi prepare to leave, he hoarsely shouts at them to not leave him like this. Sierra reassures Gabi she did what she had to do, and they jog down the tunnel.

Gabi and Sierra move through the tunnel, shoving the mining cart of their way, and skirting round the Infected that is feasting on the Unnamed Border Patrol Guard. Sierra starts to climb the ladder, while Gabi looks on in shock at the infected, but moves quickly once it lunges at her, following Sierra up the ladder. Sierra comes onto the surface and helps Gabi up. They walk to a rise away from The Tunnel entrance and smile at each other, as they are in Mexico. 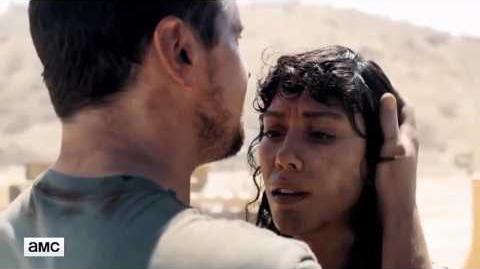 There are five known survivors appearing so far in this mini-series: 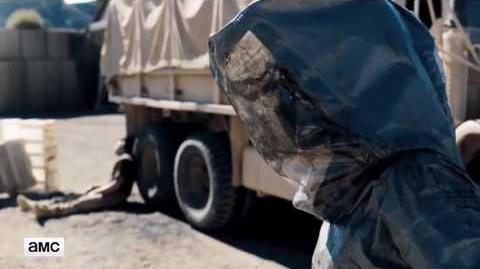 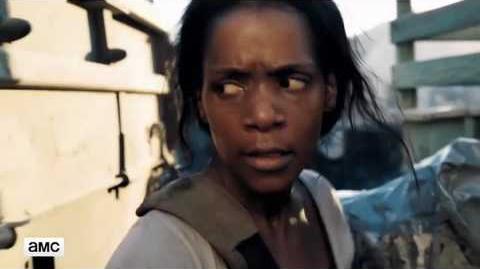 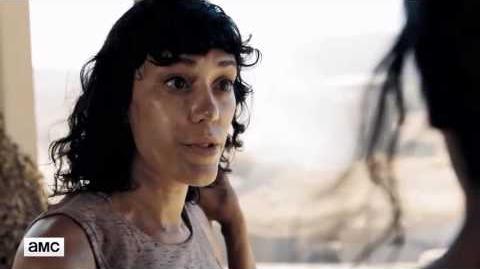 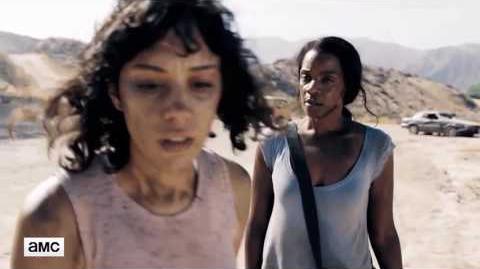 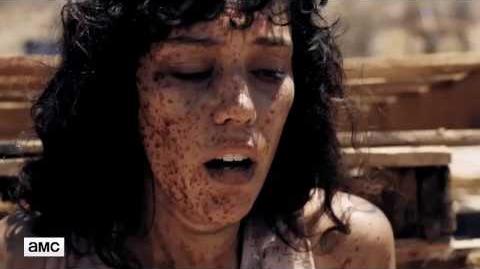 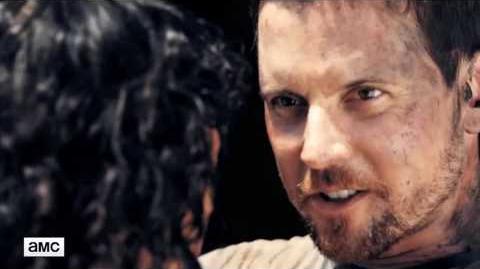 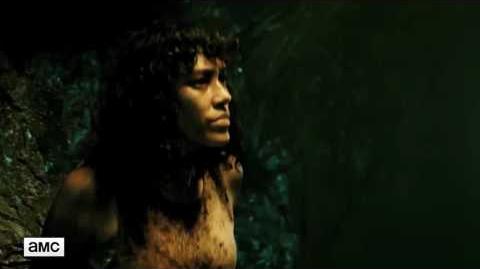 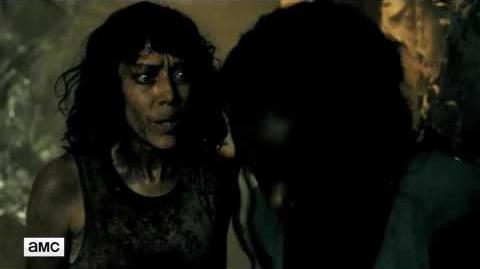 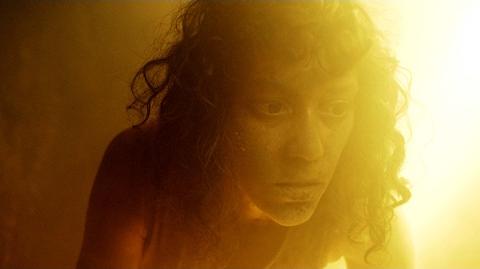 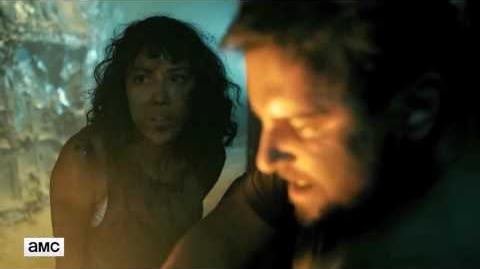 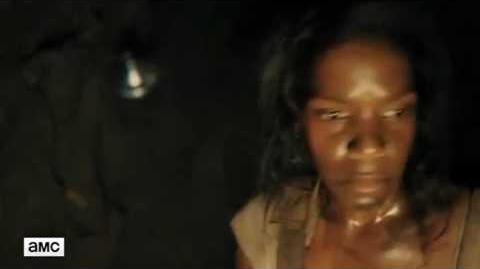 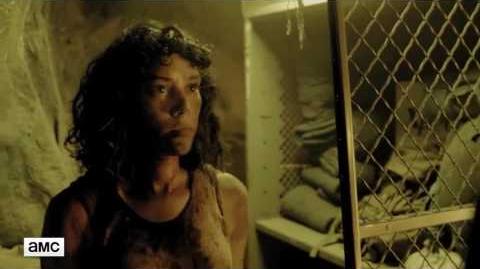 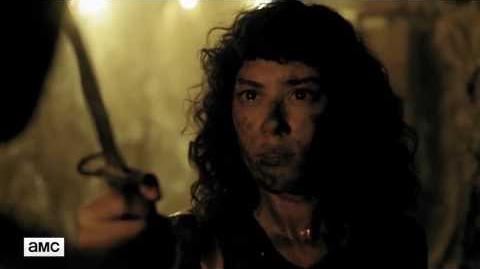 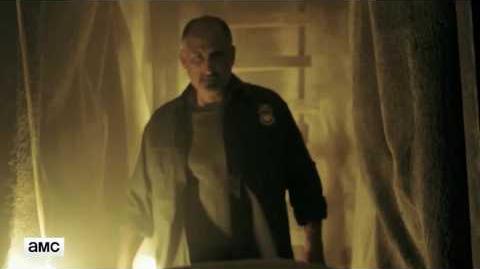 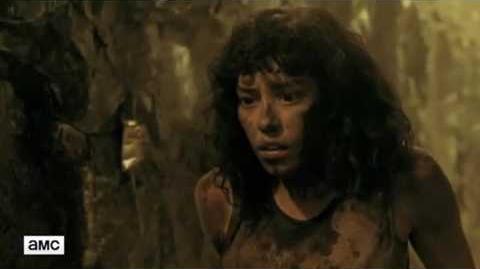 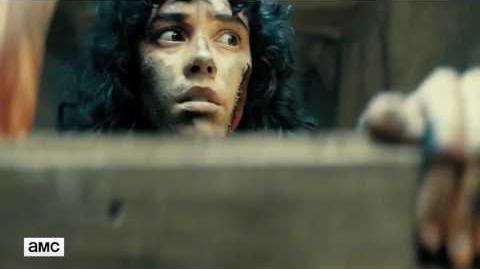 The camp, as seen by the hazmat survivor

Retrieved from "https://fearthewalkingdead.fandom.com/wiki/Fear_the_Walking_Dead:_Passage?oldid=26814"
Community content is available under CC-BY-SA unless otherwise noted.