"Fear the Walking Dead: Flight 462" is a series of webisodes which is being released online, depicting passengers of an LAX bound flight being confronted by an infected attack. One of the surviving characters from this incident will then join the cast of Fear the Walking Dead for the second season.[1]

"Fear the Walking Dead: Flight 462" tells the story of a group of passengers aboard a commercial airplane during the earliest moments of the outbreak. Over the course of the series, the plane and the lives of its passengers are put in jeopardy once they discover an infected traveler."

Each installment will be a little less than a minute in length, and be released each Sunday for the duration of Season 6 TWD. 462 is pretty much a family affair; it is written by two of the Fear production team, Lauren Signorino and Mike Zunic and directed by the Fear director of photography Michael McDonough. It’s produced by Dave Erickson and David Wiener, showrunner and coexecproducer of Fear. The two names you're not likely to know there, Signorino and Zunic, both work on Fear already as Script Coordinator and Assistant to the Producers. 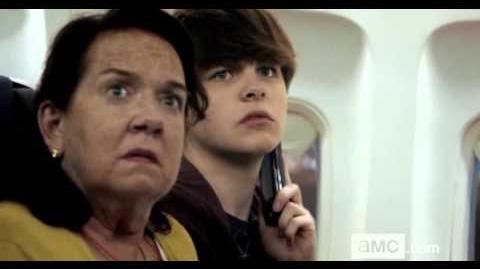 Retrieved from "https://fearthewalkingdead.fandom.com/wiki/Fear_the_Walking_Dead:_Flight_462?oldid=12277"
Community content is available under CC-BY-SA unless otherwise noted.