Start a Wiki
FAA refers to the Federal Aviation Administration.

The FAA is a national authority with powers to regulate all aspects of civil aviation. These include the construction and operation of airports, the management of air traffic, the certification of personnel and aircraft, and the protection of US assets during the launch or reentry of commercial space vehicles. In response to the September 11, 2001 attacks in the United States, the FAA grounded all flights within U.S. airspace; even diverting some flights to neighboring Canada.

The FAA remains unseen on the show, but during the outbreak of Wildfire, the FAA grounded all flights within the infected areas (and it can be assumed after the situation worsened, the entire United States).

Flag of the Federal Aviation Administration 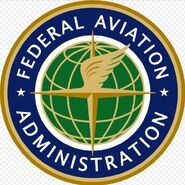 Alert to ground all flights
Add a photo to this gallery
Retrieved from "https://fearthewalkingdead.fandom.com/wiki/FAA?oldid=29928"
Community content is available under CC-BY-SA unless otherwise noted.