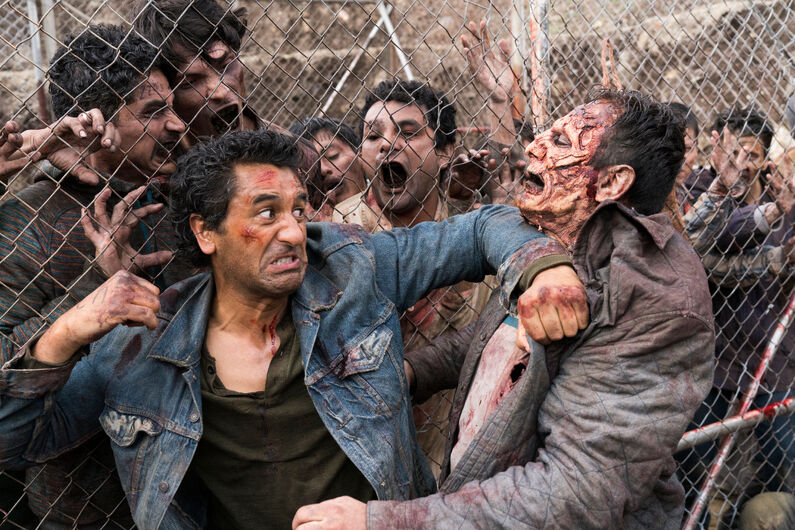 "Eye of the Beholder" is the first episode of the Third season of Fear the Walking Dead. It aired on 4th June 2017 on AMC.

This is the Season 3 premiere.

Armed soldiers drag Madison, Travis and Alicia past dismembered corpses into a military fuel depot. Travis is carted off to a different destination than Madison and Alicia.

Soldiers bring Travis to a barracks and measure his height and weight. Travis watches as soldiers shoot a prisoner in a bathroom. He's then taken to a holding area where he sees Nick, along with a wounded Luciana.

Travis sidles over to Nick and quietly informs him that Madison and Alicia are also at the depot.

Troy, the soldier in charge at the depot, enters a locked office where Madison and Alicia are being held. He offers them tea and seems hospitable.

Madison explains to Troy that she’s looking for her son, Nick. Madison then demands to know where they’ve taken Travis. Troy avoids answering, but promises to let them go once he's finished "processing" them.

Troy joins his soldiers in the barracks bathroom, which is being used as a "lab" for Troy's men to test Infected resurrection times. The soldiers are betting, with worthless money, on how long it will take the body to reanimate.

Troy stares into the vacant eyes of a dead body, waiting for him to turn. The eyes change and Infected turns, and the soldiers settle their bets.

In the storage room, Troy questions Travis about his connection to Madison, and his ethnicity. He's impressed by Travis' Maori "warrior" heritage. Travis tells Troy that Luciana is dying. Troy shrugs and declares that "everyone here dies."

Madison searches the office for a weapon. Eventually, Alicia gives her the knife that she hid in her boot before they were taken prisoner. Madison tells her that she will do any killing that needs to be done, not Alicia.

A fellow prisoner, Steven, asks Travis to help plan an escape. Their conversation is interrupted when soldiers take them to the "lab". Travis, Nick, Luciana, and Steven sit in a line as the next victim is dragged to the wall and shot.

Steven tells Travis they can escape the depot via sewer tunnels that lead to the border. Travis agrees to help and tells him that he can get them out of this room and that Steven can take them to the sewers. The bored soldiers speed up their "experiments" by shooting two victims at once. Nick is now next in line.

Troy takes notes in a journal as he sits and watches Madison and Alicia sleep. Madison wakes up and asks Troy if Travis is dead. Troy doesn’t answer. She tells Troy that she loves Travis’ life more than her own.

Willy and his comrade bet on which corpse will turn first. Travis talks to them, trying to get information from them. They decide to shoot another - Nick. Travis convinces them to shoot him instead. As they chain him up, he attacks Willy and throws the other soldier at a freshly turned Infected. Travis, Nick, Luciana, and Steven escape.

Troy tells Madison that they're getting ready to evacuate the depot. He offers to release Travis if she and Alicia travel home with him. They hear a gunshot outside and Troy runs out of the office and locks the door behind him.

Troy's men fire at Travis, Nick, Luciana, and Steven as they flee the barracks. The soldiers are gaining on them, so Travis tells Nick and Luciana to go on without him. Travis is caught and Troy orders his men to take him to the pit.

Steven leads Nick and Luciana to a sewer grate. Nick helps Luciana down, then follows behind her. Steven is shot and wounded by the soldiers before he can get down himself. Steven asks Willy to shoot him so that he won't turn. Willy cuts his throat instead and throws his body into the sewer, ensuring that he will turn and find Nick and Luciana.

Nick and Luciana make their way through sewer tunnels. Luciana urges Nick to leave her so that he can go on unburdened. He refuses and tells Luciana he will never leave her behind.

Troy returns to the office and Madison attacks him with the knife, but Troy knocks the weapon out of her hand. She grabs hold of a spoon and plunges into his eye socket. Madison tells Troy if he tries to break away he will lose his eye. Madison yells for Alicia to find Travis and a vehicle to get out of here.

Alicia sprints outside and hides between parked military vehicles. She scans her surroundings, searching for where they might have taken Travis.

Nick kicks down another sewer grate only to find a horde of Infected on the other side. He and Luciana flee back inside the tunnel; the horde follow them.

Soldiers throw Travis inside a pit of Infected. The soldiers watch as the Infected approach Travis.

Madison drags Troy outside, holding the spoon in his gouged eye, as armed soldiers surround them. Troy tells the soldiers to back off.

Soldiers bet on Travis' survival as he battles Infected in the pit.

Alicia hides in a truck as the soldiers pack for the impending evacuation from the base.

Using only cinder blocks and the surrounding walls as weapons, Travis kills all the Infected in the pit. From above, Willy tells Travis he's impressed, then decides to up the ante. He unlocks a cell inside the pit, unleashing more Infected on Travis.

Jake, Troy's brother, arrives and urges Madison to release Troy. He acknowledges that Troy probably brought this on himself, but she's surrounded and has nowhere to go. Madison releases Troy.

Troy retaliates by lunging for Madison. Jake intercepts, and demands to know where Madison’s family is. Troy admits that Travis is in the pit.

Undead Steven attacks Nick in the tunnel. Alicia hears Nick’s cries, and follows the sound to the sewer grate. She peers down and sees Nick and Luciana below. Steven is on top of Nick and about to overtake him. Alicia drops her knife down to them and Luciana puts the Infected man down.

The soldiers catch Alicia before she can reconnect with Nick.

Troy brings Madison to the pit, where they find Travis surrounded by the Infected he's put down. Travis gets out of the pit and attacks Troy, but he’s quickly restrained.

Jake offers to take Travis, Madison, Nick, Alicia and Luciana to his family’s ranch. It’s safe there, and Jake assures them that Troy will behave. Madison and Travis reject the offer.

Jake scolds Troy for killing innocent people. Troy insists he was conducting research and says that their father would understand. Jake tells Troy their father sent Troy here for a reason, "Cast one out to protect the many."

Back in the lab, Willy investigates a thumping sound coming from a vent. He opens the vent and rats pour out. When it seems all the rats are out, Willy gets too close and is grabbed by an Infected who pulls him through the wall.

Madison and Jake hear gunshots nearby. Infected have breached the gates, and the soldiers are scrambling to keep them back. The compound has been compromised.

The helicopter takes off with Travis, Alicia, and Luciana while Madison and Nick depart in a truck with Troy. Troy tells Madison that she'll see them soon, they're all going to the same destination.

From the helicopter, Travis looks down and spots the truck on the road. He assures Alicia that Madison and Nick are clear of the compound.

The gallery below is automatically generated and contains images in the category "Images from Eye of the Beholder". Images added to that category turn up in the gallery after a short time.

The gallery below is automatically generated and contains images in the categories "Images from Eye of the Beholder" and "Images from behind the scenes". Images added to these categories turn up in the gallery after a short time. 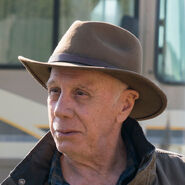 Retrieved from "https://fearthewalkingdead.fandom.com/wiki/Eye_of_the_Beholder?oldid=25890"
Community content is available under CC-BY-SA unless otherwise noted.