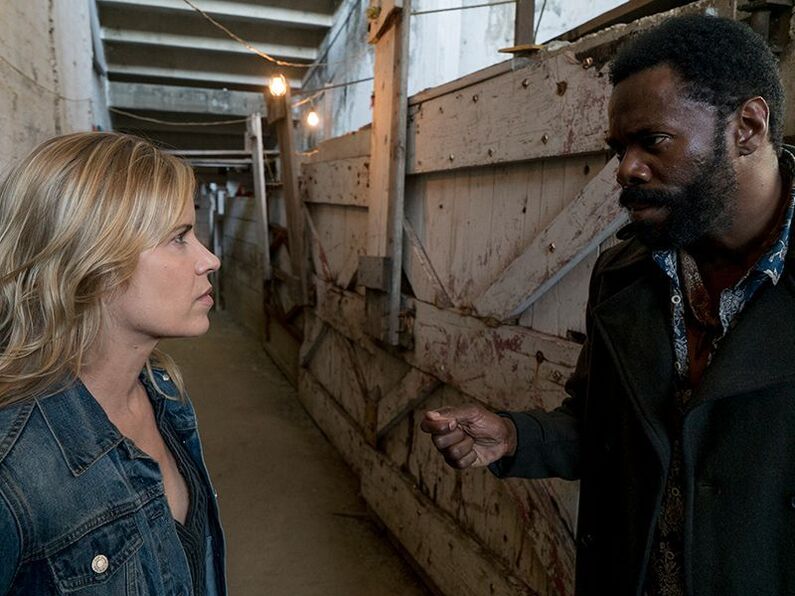 "El Matadero" is the fifteenth episode of the Third season of Fear the Walking Dead. It aired on 24th September 2017 on AMC.

Madison, Strand and Walker drive the water tanker to the trading outpost to meet with Lola and Daniel as agreed. Strand worries that they might not be welcome when they show up to the trade empty-handed. Madison argues that they do, at least, have Ofelia.

Ofelia and Crazy Dog are riding on the back of the tanker. Ofelia grows weak and, despite Lee's attempt at catching her, falls off her seat on the back onto the road. They stop and Madison checks on Ofelia, spotting a bite wound on her left shoulder. Ofelia asks for Madison's word that she will take her to see Daniel. Madison promises.

That evening, Alicia eats dinner inside an abandoned building. She hears a car and readies her rifle, she relaxes when she sees it's Nick and Troy.

Nick tries to convince Alicia to rejoin the group, promising safety in numbers. Alicia points out that she nearly died in the pantry, while surrounded by people. She does share her food with them though.

Madison's group arrives at the outpost a day early. Strand tells Madison that the outpost guards will kill Ofelia if they think she's sick, but Madison insists they must enter to get Ofelia a bed and medicine. They get Ofelia a clean shirt and Madison warns her to look well.

Madison's group hands over their weapons at the checkpoint. Ofelia steadies herself, and a guard waves her through. Madison sells part of their rifle stash to pay for entry.

Madison sets up Ofelia in a room then goes to find painkillers. Walker stands guard over Ofelia.

Strand tells Madison that they're wasting resources on Ofelia, but agrees to see how things play out with Daniel.

Nick says goodbye to Alicia and gives her a map. He and Troy drive to the outpost. On the way there, Troy tries to find out more about what Alicia was telling her brother, and tells Nick that they're more alike than Nick thinks.

Madison gives some Vicodin to Ofelia. As Ofelia sleeps, Walker tells Madison that she's doing the right thing by honouring Ofelia's request to see her father one last time.

Alicia scavenges for food inside a burger joint. She procures a tub of potatoes from the kitchen but has to hide in the playground ball pit when she sees a group of Infected heading toward the restaurant. An Infected girl attacks Alicia from within the pit. Alicia stabs her through the head and hides again in the balls. The Infected enter the restaurant followed by a woman who strides in and slaughters them all with a pickaxe. Afterwards, she severs their fingers with secateurs, pulls their teeth with pliers, and stashes all this away - then walks off with the potatoes. Alicia follows cautiously.

Nick finds Madison sleeping by Ofelia's side. He watches over Ofelia while Madison takes a break. He stares at the Vicodin pills, takes a handful and pops one into his mouth.

Alicia spots the woman's car in a supermarket parking lot. She reaches inside to steal the potatoes. The woman, Diana, shows up and threatens to kill her. Alicia threatens to shoot up Diana's gas tank then proposes they share the potatoes instead.

At the outpost cafeteria, Nick joins Troy at a table and orders tequila. Nick asks the waitress where they can find the slaughter yard. Nick pops another pill and downs the tequila. Troy joins him.

Guards capture Strand as he sneaks around the outpost. Strand demands to see John Proctor and says he has something that John will want.

Madison helps Ofelia walk to the parking lot. Ofelia asks Madison to tell Daniel that she was looking forward to getting to know him, then she dies. Daniel arrives and goes straight to Ofelia. He cries and pulls a gun on Madison when he sees that Ofelia is dead. Madison explains what happened. Daniel sends her away and shoots Ofelia to stop her from turning.

Nick and Troy walk around the outpost in a haze, high and drunk. Nick asks for directions to the slaughter yard.

Nick and Troy enter the slaughter yard, which is functioning as a drug den. A man offers an assortment of drugs, but Nick wants uppers. The man places mysterious animal glands in two shot glasses. Troy starts to leave in disgust, but Nick eats the gland. Troy caves in and eats his.

Alicia and Diana eat the potatoes inside an abandoned clothes store. Diana explains that she sells the fingers and teeth to Mexicans at the outpost. Alicia tells Diana that she's travelling alone to a place in the desert. Diana warns her that every town has been picked clean and tells that she doesn't keep company.

Nick and Troy roam the streets in the middle of the night and encounter a herd. Nick smears his face in Infected blood and instructs Troy to do the same. To Troy's amazement, the herd walks right by them.

Madison cleans up Ofelia's room and realizes that Nick has taken some of the Vicodin. Daniel stops by and they talk for a while. He tells her that he has buried Ofelia and she tells him that Ofelia gave her a message for Danial before she died. She tells him that Ofelia said she loved him and that she was looking forward to getting to know him. She also tells him that she told Ofelia that she already knew her father, Danial. Initially Daniel seems to reject what she ways and is angry, but he calms down and informs her that she can still come to the dam, along with Strand, Walker, Nick, and Troy.

Alicia wakes up and finds Diana trying to get her car started outside. A small group of Infected approaches and they decide to take them on together.

Madison prepares to return to the dam with Victor Strand and Qaletaqa Walker. Nick informs her that he and Troy will stay at the outpost to secure a toehold for future trading. Knowing that Nick has ulterior motives for staying, Madison tells him to do what he has to, and that he knows where to find her.

The gallery above is automatically generated and contains images in the category "Images from El Matadero". Images added to that category turn up in the gallery after a short time.

Retrieved from "https://fearthewalkingdead.fandom.com/wiki/El_Matadero?oldid=26476"
Community content is available under CC-BY-SA unless otherwise noted.