Fear the Walking Dead Wiki
Register
Don't have an account?
Sign In
in: Documenting the fall, Information

Not much is known, from a national or international point of view, of the events that led to the fall of civilization. What information does exist is partial, second hand or questionable. In particular there doesn't seem to be any information available on the source or cause of the outbreak (i.e. was it viral or bacterial, or was caused by another source).

We can see that much more was known about the crisis than was revealed to the public at the time.[1]

For example the report in an unknown LA newspaper by the reporter Jason Gibson reporting an unusual incident of domestic violence where a man (Patrick Sutherland) had died and then turned, attacked his family, left the house and had killed and was eating a pet cat when he was shot - many times - by the LAPD. This news report also states that this case was, at the time of it's occurance, one of eleven cases reported nationwide.

There's a single page of a 6 page World Health Organization memo on the "Management of the Deceased Operations Protocol" which describes a protocol clearly designed to reduce the risk to health professionals from the reanimated dead by severely limiting the time that resuscitation can be attempted for[2]. No trace as yet of the other five pages nor any hint of the names which have been redacted from the single page has emerged. (N.B. While this WHO memo suggests that the infection was serious enough to be discussed at an international level, and before any real knowledge reached the general public, it is later implied that the 'ground zero' of the infection was in the U.S., and limited to the states west of the continental divide).

The protocol set out by the WHO are seen in action in Nick's hospital room in the first episode of Season 1, "Pilot"; this example is slightly inconsistent with the protocol described in the memo, in that CPR is continued as the patient is removed from the room on his bed.

None of the medical staff remark on the "new" protocol, despite it being very different to the usual guidelines covering resuscitation and patient DNR statements, so it's probable that the protocol had been in place for some time, certainly days and possibly weeks.

It's becoming clear that, as the emergency progressed, various State and Federal agencies took increasingly wide-ranging actions- such as the FAA grounding flights.

In addition to the information known to police, health care professionals, and presumably governments and armed forces, it's known from eyewitness testimony (Tobias in Ep 2, "So Close, Yet So Far") that information, images of The Infected and possibly video footage was available online for some time before the events shown in "Pilot".

However, apart from a select few, this information was not well known among the general civilian population. This lack of knowledge led to riots against police brutality over the shooting of a Homeless Man by police, when in reality, the police were shooting a member of the infected. This rioting led to the outbreak reaching epidemic levels in Los Angeles as the infected were able to move freely through the crowd and police were too preoccupied with rioters to tackle the infected.

After the fall of Los Angeles[]

In the days & weeks immediately following the fall of LA some of the forces of Law & Order were still active, though it's not clear to what extent they were under any form of central control. We know that by day nine (the nineth day after the power went out) there were "Safe Zones " in the LA basin controlled by the California National Guard. The commanding officer of "Safe Zone India " an officer called Moyers claimed that there were 12 Safe Zones and an HQ which included a medical facilit

y established. The Safe Zones were named Safe Zone Alpha, Beta, Charlie etc. through to Safe Zone Lima. (See attached map) It's not clear if the HQ was part of one of those 12 Safe Zones.

Moyers also claimed that nothing was left alive in the DZ (the Dead Zone), that being the area between the Safe Zones, and that the 6 miles surrounding their zone, called Safe Zone India and circled on the map, was "infect free". There's some eyewitness evidence that this wasn't true at about day 9 after The Fall. Chris Manawa, Travis Manawa and Madison Clark saw activity in the DZ as there were reflected sunlight flashes in the day and torch flashes at night, and then muzzle flashes and gunfire from one particular building. From Madison Clark there's testimony that healthy people were killed with gun shot wounds to the head in the area surrounding India. An anonymous source has claimed that Madison had come across an area where the residents had refused to move and then been killed by the military. If true, it's not clear how widespread this was, in what circumstances these individuals died, or what elements of the mlitary murdered them, but they seem to be physically close to Safe Zone India which was commanded by Lt Moyers at that time. Madison claimed to have encountered bodies almost immediately after having left India for a short time on day 10. 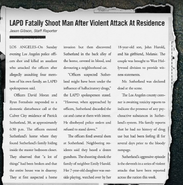 The riots caused by the 7th Street shooting]]

Map of the area initially effected by the riots

Map of the Safe Zones in the LA Basin