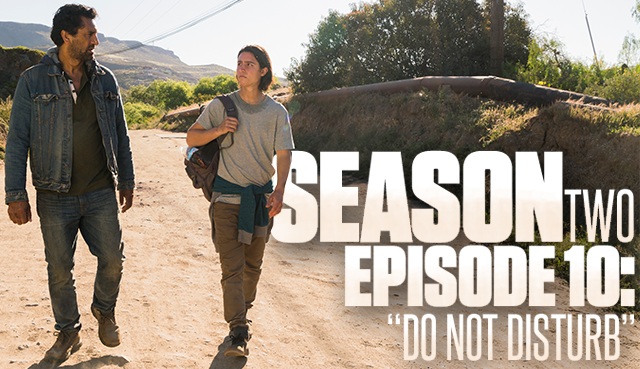 "Do Not Disturb" is the tenth episode of the second season of Fear the Walking Dead. It aired on 4 September 2016 on AMC.

In a flashback, a bride and groom dance at their wedding reception in the banquet hall of the Rosarito Beach Hotel. The mother of the bride informs the hotel manager, Elena Reyes, that she and her guests will be departing promptly due to reports of the spreading sickness. As Elena assures her there’s nothing to worry about, and then tells a young man to make sure the vehicles are ready. The father of the bride collapses while dancing with the bride and dies, despite CPR. His daughter gives him rescue breaths - the kiss of life - and he eats a hole in her face when he reanimates. As panic erupts, Elena flees with her nephew Hector and locks the party guests inside the banquet hall.

Travis limps down a Mexican road with Chris. They find a car in a nearby town. Chris insists on searching for supplies at a restaurant, the Magana's Tacos Restaurant just up the road while Travis hot-wires the car. Magana's is looks open, it's clean, tidy and apparently deserted. Inside, Chris hears voices in a back room and sees the owners recently dead on the floor. He stuffs a can of beans into his backpack then kills off incoming Infected, saving one of the armed men as he emerges from the back. After seeing the men, Chris flees back to the car and tells Travis to "Drive!" The man from the restaurant that Chris saved comes out and sees them race off - but they are well away. Travis drives through the night. He lets Chris drive for the first time when his injured foot worsens.

Alicia hides in a bedroom from the Infected roaming the hallways of the Hotel. She prepares to leave the room when she thinks it's clear but stops when an Infected seems to see her through the spyhole - and lunges at her on the other side of the door.

On their journey, Travis assures Chris the world will return to normal some day, but Chris is skeptical. When they run out of fuel, Travis and Chris start a campfire near the road. While the beans cook, Travis suggests they find a house with a well, in an elevated location that would offer a good vantage point. A truck parks on the road: It’s the young men from the restaurant. Travis and Chris stamp out the fire and hide a little way off. Chris tells Travis that he stole food from the men at the restaurant. The men find their campsite and shout promises not to hurt whoever is hiding in the bushes. Travis and Chris come out of hiding. The men — Brandon, Derek and "Baby" James — invite Travis and Chris to eat with them.

Alicia ventures outside the room and gets cornered by Infected. She’s able to escape only by leaping into an elevator shaft and shimmying up the cable to a higher floor, just out of the reach of the Infected. A woman, Elena, appears and helps her to safety, but then immediately threatens her with an axe, demanding "Where is he?". Alicia has no idea who "he" is.

Travis informs Brandon’s group that San Diego, their hometown, is destroyed, bombed by the Air Force like LA. Brandon offers Travis and Chris a ride to the U.S.. Travis declines but accepts a ride to the next town.

Alicia talks Elena down and asks her to help lure the Infected out of the stairwell so that she can get downstairs and find Madison. Elena explains that the wedding party guests took her nephew Hector hostage because they want her keys, which provide access to every hall and building in the hotel. Alicia offers to help Elena find Hector in exchange for Elena’s help getting downstairs.

Chris tells Travis they should join Brandon’s group but Travis worries the men are too dangerous to be trusted. “Maybe that’s what it takes,” replies Chris.

Alicia lures the Infected from the stairwell into an empty room and Elena shuts the door behind them. Alicia puts down one of the Infected (who used to be a maid called "Christina", from her name badge), and runs onto the balcony, closing the sliding door. From an adjacent balcony, Elena appears and helps Alicia to safety as the Infected break their way through the glass door of the balcony she just left. They make their way down the cleared stairwell to the banquet hall. Elena admits that she locked all the party guests inside to contain them when one of the guests died and then turned. “Now they hate me” she says. Alicia says her group has done worse and vows to keep Elena safe.

Travis and Chris ride with Brandon’s group. Chris sits in the cab with Derek and Baby James, laughing at their cocky banter. He spots a farm in the distance. Brandon’s group drives to the farm to look for food and supplies. The farm is well tended and tidy, it also looks to be picked clean of supplies and abandoned. Travis pulls Chris aside and suggests they stay at the farm when Brandon’s group moves on. Chris refuses, saying they need to stay with people. He follows Brandon to check out the barn. Brandon’s group finds chickens inside the barn. Overjoyed, they begin chasing down the chickens, hoping for an easy meal.

Meanwhile, Travis finds the graves of two children and an older woman outside the house, he realises that the person who buried them might still be around and runs to the barn, where he can hear the boys shouting.

Alicia and Elena find the doors to the hotel bar barricaded. Inside the bar, a group of Infected pound on the doors. Some survivors, the wedding party guests, come up behind them as they're looking into the bar, they're holding Elena’s nephew hostage. Elena gives them her keys in exchange for Hector. Alicia flings open the bar doors, allowing the herd to swarm the party guests.

Travis runs to the barn and warns the group that whoever buried the people in the graves is still at the farm. He's proved right when Matias Suarez comes in with a rifle. Travis insists they leave and let the man keep his farm. The man tells them it's his property and "Larguense de aqui o disparo" ("Get out of here or I'll shoot!")

Alicia looks for Madison in the bar. She sees a clearly Infected woman in a flannel shirt and assumes the worst, but the Infected only looks like Madison and Alicia finds no other trace of her mother. She flees through an underground tunnel with Elena and Hector. They pound on a locked door as Infected close in behind them.

With guns drawn on him, the farm owner shoots James in the leg after he snaps a chicken’s neck. Chris shoots the man, fatally wounding him.

Travis stares at Chris as the farm owner dies. Chris holds out his hand to Travis but he turns away.[1]

Chris looks after himself, and saves Brandon

Travis & Chris get some transport

This isn't really a "Do Not Disturb" photo, I just like the jackets.

Travis tries to talk the situation down in the barn

Alicia waits for her moment in the hotel corridor

Alicia, talking her way out of trouble?

That man wants them out of his barn

It's Chris that shoots him

All Travis can do is watch the man die

Alicia puts down the zombie maid

And then nips outside onto the balcony

Chris - is he more lost than Nick?
Add a photo to this gallery 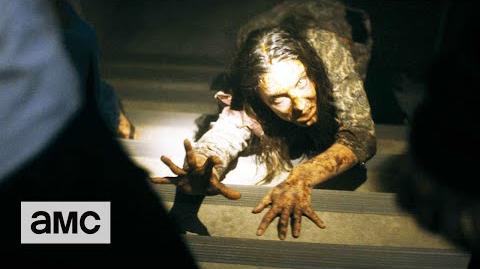 Retrieved from "https://fearthewalkingdead.fandom.com/wiki/Do_Not_Disturb?oldid=21680"
Community content is available under CC-BY-SA unless otherwise noted.