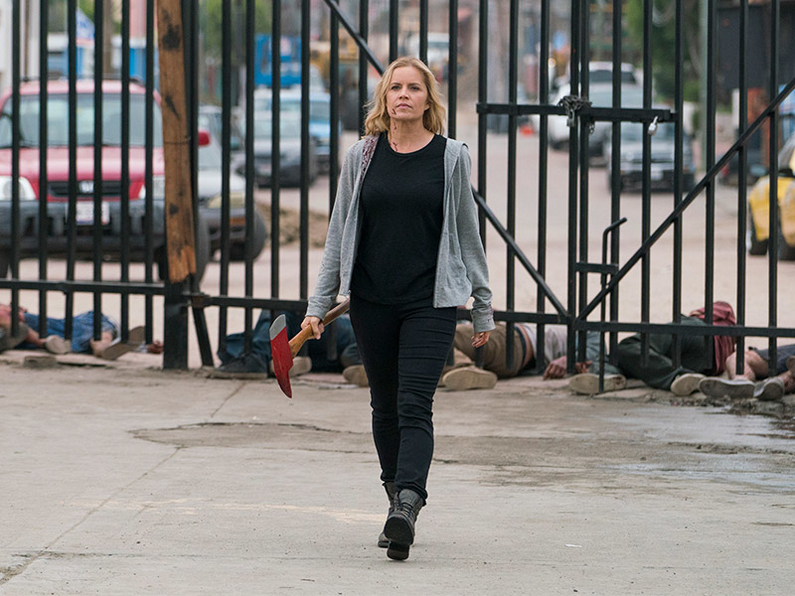 "Date of Death" is the thirteenth episode of the Second season of Fear the Walking Dead. It aired on 25 September 2016 on AMC.

A mob of survivors bang on the gate of the Rosarito Beach Hotel after spotting the lights that Madison turned on the previous night. Madison, Alicia, Elena Reyes, Oscar Diaz and Hector stand guard, refusing entry. People plead to be let in but they refuse, then Madison sees Travis in the crowd and he pushes forward to the gate.

In a flashback, James writhes in agony after a farmer, Elias Suarez shot him in the leg at the farm. Elias lies dead on the ground following Chris’ fatal gunshot. Travis tells Brandon, Derek and Chris to stop James’ bleeding while he finds something to stitch up the wound.

Travis runs to the farmhouse and finds gauze, scissors and sewing supplies, he returns and sews the entry wound shut before rolling him over to tret the exit wound. James screams in pain. Travis tells him that he won't move him again until he's recovered. Travis assures the group that James will get better, but Brandon wants to know how long it will be.

Travis buries the farmer next to his family and makes a cross for the headstone.

Brandon, Derek and Chris laugh around a campfire eating chicken and drinking beer. Travis checks in with James and asks him how he's doing. James is hesitant to admit he’s in pain in front of his friends. Travis urges James to alert him if his condition worsens.

Travis pulls Chris aside and chastises him for killing the farmer and feeling no remorse. Chris defends his actions and warns Travis to be careful how he acts with Brandon’s crew. "We need them," he says.

At the hotel, Madison opens the gate for Travis but keeps the other survivors out. They embrace as Madison leads him away from the gates.

Travis stares despondently at the ocean from a hotel balcony and asks Madison where Nick is. Madison says that Nick ran away, then asks where Chris is. Travis sits on the bed, emotional. “I had no choice,” he says.

At the farm, Brandon announces that they’re moving on to their next location. Travis argues that it's only been a week and that James is not well enough, but James insists he’s okay to travel. Derek says they’re going to San Diego. Travis reiterates that San Diego was destroyed and asks Chris to back him up, but Chris says they never actually went to San Diego.

Travis finds the farmer’s driver’s license and carves the farmer’s name onto the headstone. Chris tells him the group is waiting on him to leave. Travis snaps at Chris and orders them to wait.

Travis helps the others move James onto the truck. James winces but insists he’s okay. As they start to drive, however, the pain becomes unbearable. James begs Travis not to tell Brandon, then passes out. Travis orders Brandon to stop.

That night, Travis overhears Brandon, Derek and Chris discussing killing James. Chris points out that James isn’t getting better. Travis insists he’ll get better with time and that they can survive at the farmhouse long enough for him to recover. He grabs Chris’ gun and refuses to let them kill James.

Travis guards James and informs him that his friends want to kill him. James explains that they had a friend, Troy, who became infected and made them promise to kill him before he turned. When it came time, however, Troy changed his mind. James says that he apologized to Troy and shot him. Travis says this is different because James isn’t dying, but James insists it doesn’t matter, as long as they think he’s dying they'll kill him.

The next morning, Chris brings food to Travis in the barn and says he’s afraid of Brandon and Derek. Travis assures him he’ll be okay. They hug. Chris seizes the moment and tackles Travis, pinning him down. Brandon and Derek rush in. Brandon shoots James in the head despite Travis telling them they could just leave James with him - and James asking for mercy.

Back in the present, Madison assures Travis that he didn’t have a choice and reminds him that Chris is still out there. Travis tells her he regrets not telling Chris that he loved him when they parted ways. Madison holds his hand.

Madison goes to the parking garage and finds it filled with survivors. Andres explains that they let the 43 survivors in and are examining them for infection.

Alicia finishes examining a survivor, a woman with a bruise on her back from "a bat", for bite wounds. Madison takes her for a walk and on the pier, tells Alicia that her father’s car accident was really a suicide.

Alicia reels from the news and asks how she can be sure. Madison tells her about the note found in the glove compartment and, after Alicia insists, tells her the note read "I love you all, but enough’s enough." Madison explains that she didn't tell Alicia and Nick because she wanted to protect Nick, who she worried would end up like his father. She says the only reason she paid less attention to Alicia over the years was that she believed she was doing alright. They hug.

That night, another small group of survivors arrives at the hotel gates — including Brandon and Derek, but not Chris.

Brandon shoots James in the head.jpg

Travis and Madison embrace when he arrives at the gates-2-935.jpg

Travis and the mob at the gates.jpg

Madison sees the refugees in the hotel car park.jpg 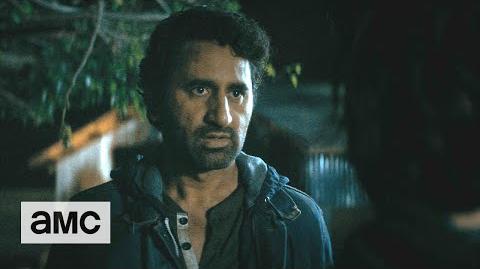 Fear the Walking Dead 'Kill or Be Killed' Official Sneak Peak Ep. 213
US Only 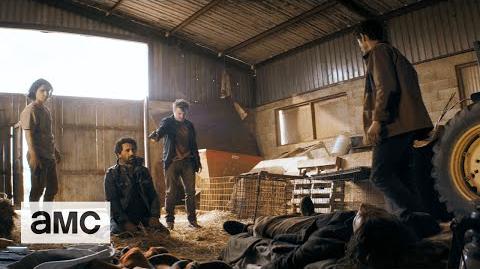 Fear the Walking Dead 'Life Still Matters' Talked About Scene Ep. 213
US Only
Add a photo to this gallery

Retrieved from "https://fearthewalkingdead.fandom.com/wiki/Date_of_Death?oldid=21683"
Community content is available under CC-BY-SA unless otherwise noted.