Daniel Salazar is a major character in the first, second, third, fifth, and sixth seasons. He is portrayed by Rubén Blades.

Daniel was a soldier in the ranks of the Salvadoran junta during the Civil War in the 1980s. He escaped by fleeing to America as a refugee, where he raised a family with his wife and now owns a barbershop. He took great pride in his business but kept mostly to himself within the community. Some of Daniel’s regulars had been going to his barbershop, Salazar's Cuts for years, but they barely knew him. When people began rising from the dead, Salazar reverted to the man he was in El Salvador, a man who will do anything to ensure the survival of his family. [1]

Daniel Salazar was born in El Salvador and actively participated in the Civil War during the 1980's. After the war, he moved to Los Angeles with his wife where he owns and operates a barber shop. They have raised one daughter in America. A humble man who keeps to himself and shelters his family.

Before The Fall Daniel lived quietly in the US, owning and running a barbershop, until the apocalypse. He moved there because of troubles in his original country and did his best to leave all of that behind him. He took great pride in his business but remained a very private man, people who knew him for years actually knew very little about him.

The Fall brings out facets to Daniel's character that have been long hidden and brought to the surface memories of events he would much rather forget. He reverts to the man he once was, a man who will do anything to ensure the survival of his family, he also starts to become tormented by memories past events and of the people he killed during the Salvadoran Civil War.

"We All Fall Down"

In a cabin on The Abigail, Daniel treats the wound that Reed sustained from the crowbar. He causes Reed a good deal of pain, Reed tells Daniel that his brother, Connor, has a dozen men and five boats and will come looking for him. Daniel's pleased with that information leaves Reed tied up in a chair being watched over by Chris.

In the wheelhouse, where Strand is recovering, Daniel tells Madison that they can use Reed’s relationship to Connor as leverage over Connor. They locate Connor’s base by scanning the radar for a cluster of five boats. Madison steers the Abigail north.

In Spanish, Luis tells Strand someone is waiting for them and they need to go, but Strand says “he” would understand. Luis counters that he only has enough money for two people to cross the border. “Everything is a negotiation,” replies Strand, as Daniel listens in.

Daniel advises Madison to let Nick and Chris help fight Connor’s group and urges her to stop treating them like children. Madison ignores his advice.

Strand spots a cluster of five boats docked along the shore and tells Daniel that they’ve arrived at Connor’s base.

Daniel stabs a reanimated Reed and pins him to a wall, leaving him struggling there. He realises that a zombified Reed can be exchanged for Travis and Alicia.

Daniel places a hood over Reed’s head and hears a man's voice. “Take the gun, Daniel.” but the room is empty. It repeats several times Daniel and Ofelia escort Reed out of the room.

Daniel puts zombified Reed aboard the zodiac with Madison.

At sea The Abigail approaches a Mexican flotilla that is guarding the border.

In The Wheelhouse, Luis prepares to meet with his military contact on the flotilla guarding the Mexican border and pay for their passage. Strand sees military officers approaching in a boat. Concerned that a second officer is coming as well as Luis’ contact, he orders Madison to hide everyone below decks.

From the engine room, Madison’s group, that is everyone aboard except Strand and Luis, listen to the conversation between Strand, Luis and two military officers, Daniel translating for the group. Gunfire erupts after the officers insist on searching the boat to make sure no Infected are aboard.

When the lights go up and the engines start again, Madison’s group charge upstairs. A mortally wounded Luis lies next to two dead officers. The Flotilla start to fire on them, the group take cover and Strand powers The Abigail away. Daniel stabs the officers in the head to prevent them from turning. Luis begs Daniel not to do the same to him, Daniel says he has no choice and prepares to do so anyway, but is stopped by Nick and Ofelia. Luis gives Ofelia a medallion with an owl’s face and asks her to give it to his mother. In temper at being stopped from killing Luis, Daniel flings the medallion into the ocean. Nick stays with Luis as he dies, listening to him.

Strand steers the Abigail toward the Mexican coastline, as they near the coast the flotilla stop firing on them, abandoning the two officers who boarded The Abigail, Strand says this is because the flotilla think that whatever is on land will kill them anyway.

On land, Strand leads the group inland, they find a pile of dead bodies in front of a church, the bodies are being eaten by a dog. Strand spots Thomas’s truck and calls Thomas’s name, he runs around in panic looking for Thomas and calling out for him. The group fight off a herd of infected parishioners who arrive because of the noise. Daniel grabs a young infected boy and is paralyzed by the memory of clutching a young boy by the neck on an earlier occasion. Ofelia puts the zombified boy down for her father.

Strand drives them to the Abigail family's gated estate where the gate opens automatically as the car approaches. Inside the gate people are calmly working in the vineyard and near the main house, Celia, Luis’ mother, greets them. Strand tells her that Luis is dead. "He’s one of them now." Strand says. "Then he’ll find his way back" she replies; on hearing of the death of her son she is upset, but not grief stricken. Sofia, a member of the household asks the group to hand over their weapons. Everyone complies, Daniel somewhat reluctantly, but he does eventually hand over his knife and then his hand gun.

Daniel looks at photos of the dead posted at an outdoor shrine. He notices an owl carved into a tree trunk above them. It's similar to Luis’ medallion. Celia puts a photo of Luis on the shrine with the others already there and explains that Luis’ death does not faze her because he was not shot in the head.

Ofelia summons Daniel to dinner and finds him sitting on his bed in a daze, he tells here to leave him alone.

Daniel takes a nighttime stroll and sees a young boy, Juan, place a dog down a chute that leads to the wine cellar.

Daniel follows Juan to the wine cellar, where Juan explains that he’s talking to his mother. Daniel enters the cellar and sees a cell full of Infected.

Daniel confronts Celia about the Infected. She explains that they are all family members of people who work on the estate. As she prepares two communion wafers, Daniel realizes that she killed the parishioners with poisoned wafers. she corrects him by saying "They were killed by you", then urges him to make peace with his dead.

Daniel set light to the cellar at the Abigail Vineyard, his fate isn't seen but with a interview with Dave Erickson, it was confirmed that Daniel is alive. His fate is left unknown though until we get to see him in Season 3 of Fear The Walking Dead

Daniel closes the shutters on his shop as the riot starts

The Manawas meet Daniel for the first time, they ask to come in. 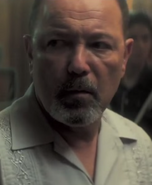 Daniel in his shop with Chris behind him. A shot from the trailer.

Daniel and his wife Griselda

A cast portrait, showing all of the main members of the cast. 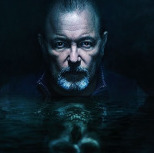 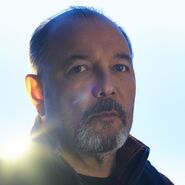