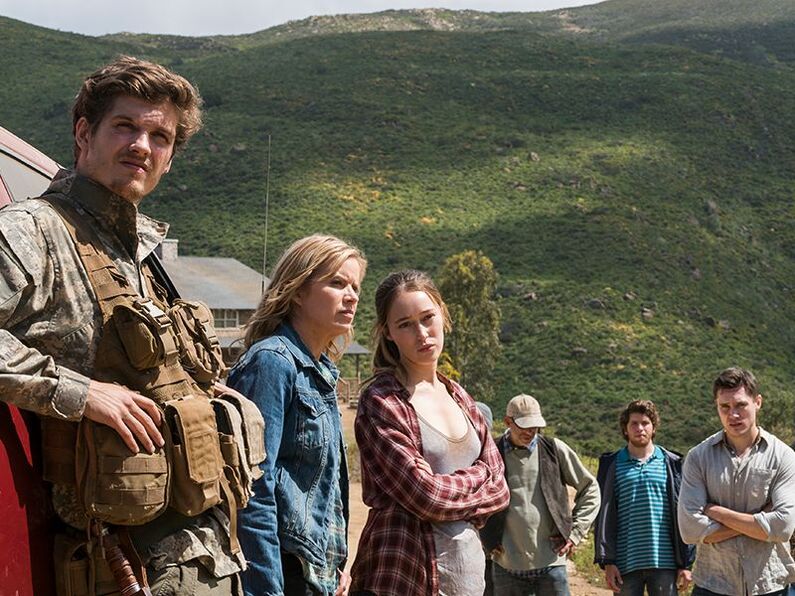 "Children of Wrath" is the eighth episode of the Third season of Fear the Walking Dead. It aired on 9th July 2017 on AMC.

The episode begins with a flashback, showing the scene from the Season 2 finale, "North" when Jeremiah Otto shoots at Ofelia Salazar in the desert. Once he reaches her he offers her water and she accepts it. Initially, he doesn't think she is American.

He brings her to his truck, interrogates her and then says he's going. Ofelia asks for a ride, but Jeremiah says that "brown people" are not welcome at his home. She spits at him. He drives off.

Ofelia wanders through the desert and collapses, near death. She hallucinates and sees her father (Daniel Salazar) and Jeremiah rescuing her. Qaletqa Walker discovers her in this state. He gives her water and brings her to the Black Hat Reservation.

Walker examines Ofelia, bathes her and offers her food.

Back in the present, Madison chases Ofelia and pulls her from a pickup truck as she tries to escape the ranch. She punches and interrogates her for answers.

The next day, ranchers load dead bodies onto a truck. Jake Otto and Alicia tend to the sick, which includes Nick. Madison informs everyone that Ofelia poisoned the militia's coffee.

Madison holds Ofelia at gunpoint and forces her to drive to the Black Hat. Ofelia insists that the powder was only supposed to make the militia sick so that her people, the Black Hat community, could take over the ranch without bloodshed.

Madison brings Ofelia to Walker and demands to know what the poison was. He tells her that the poison was anthrax but says that Nick will survive if he's able-bodied. He warns that she and her family will die if they don't leave the ranch.

Strand scavenges for food. He looks out a window and sees a sight to brighten his spirits: the Abigail, run aground on the beach, wallowing slightly in the surf.

Strand wades into the water and boards the Abigail. Infected roam throughout the boat. Strand puts them down with a spear gun, knife, and pistol taken from one of the dead.

Madison tells Jake that the poison was anthrax and that those who don't die will be too weak to resist an attack. Jake orders Troy to gather the remaining militia, but Troy is the only one left. Madison suggests they recruit the ranchers but Jake tells her she doesn't lead the ranch.

Jake eventually agrees with Madison's plan to fight and instructs Troy to arm anyone who isn't sick. Alicia suggests they try to negotiate with Walker again. Jake points out that they have no leverage to broker a deal. Alicia hatches a plan.

Strand finds a bottle of Champagne on the Abigail. He goes to the upper deck, gets out a satellite phone and uncorks the bottle.

Nick convinces Jake to uncuff him from his cot, assuring Jake that he won’t turn. As Nick goes to look for Jeremiah, Jake warns that Jeremiah has another side to him and Nick will end up disappointed.

Nick watches Jeremiah and several ranchers bury the dead in a mass grave.

Nick rips the floorboards of his adobe open.

Ofelia tells Walker that she cares about the Clark family and admonishes him for using anthrax without her knowledge. Walker maintains that she's saving the lives of his people. They're interrupted by a commotion outside.

The Nation rushes to extinguish a tipi fire started by Troy and a team of ranchers. As Troy's team distracts Walker's people, Madison and Alicia hitch the Black Hat reliquary to a truck and haul it off.

Nick digs a hole underneath the adobe floor and is about to give up when his shovel hits something hard.

Nick goes to Jeremiah's house and confronts him with a skull that he found under the adobe. Jeremiah confesses that as the rivalry between the ranchers and the Black Hat escalated, the founding members of the ranch murdered three Black Hat men, including Walker's uncle. He says the skull belongs to Walker's father, who Jeremiah killed when the man started to investigate his brother's disappearance.

Madison and Alicia bring the reliquary back to the ranch. Walker follows with a host of soldiers.

Nick shows the skull to Madison and Alicia and relays the story he heard from Jeremiah. He also reveals to Alicia that Troy killed the Trimbol family Alicia accuses Madison of being heartless for standing with Troy despite the murder of Gretchen Trimbol, Alicia's friend. Madison declares that she's too busy keeping everyone alive to have time for feelings.

Strand makes contact with a Russian cosmonaut who's trapped in orbit, presumably on the ISS. The Russian tells Strand that the rest of the world is Infected.

Madison meets with Walker and offers to return the relics in exchange for peace and ownership of the ranch. She gives him the skull of his father. He rejects her terms and gives the remains back.

Madison informs her group that Walker still wants the ranch and is giving them until sundown the following day to vacate.

Strand gathers supplies then douses the Abigail in alcohol and sets it alight. He makes his way ashore and starts to head north.

In the bunkhouse, Madison reveals to Nick and Alicia why she's never taken them to her hometown in Alabama. Madison shot and killed her alcoholic father when she was a child because he beat her mother. She resolutely insists she would do it again if it meant protecting her family.

Madison goes to Jeremiah's house and tells him that Walker is willing to offer peace in exchange for Jeremiah's scalp. She puts her gun on his desk and urges him to kill himself. Jeremiah refuses and the discussion deteriorates. As Madison points her gun at Jeremiah - and hesitates - Nick walks in and shoots the man in the head. Once that has happened, Madison quickly begins to put a plan into action.

Jake and Troy run to Jeremiah's house to find Jeremiah dead. They remove Jeremiah's body from the house.

Madison walks up to Jeremiah's coffin in a barn and later, meets with Walker and places a backpack at his feet. He opens it and finds Jeremiah's head inside. He fastens the backpack, nods at Madison and walks away with it.

The gallery below is automatically generated and contains images in the category "Images from Children of Wrath". Images added to that category turn up in the gallery after a short time.

The gallery below is automatically generated and contains images in the category "Images from Children of Wrath". Images added to that category turn up in the gallery after a short time.

Retrieved from "https://fearthewalkingdead.fandom.com/wiki/Children_of_Wrath?oldid=31455"
Community content is available under CC-BY-SA unless otherwise noted.