Blood in the Streets

Celia Flores was a recurring character in the second season. She was portrayed by Marlene Forte.

Celia has worked for the Abigail family for a long time, reaching a position of managing the Abigail Family Vineyard. She took on the position of a surrogate mother to Thomas Abigail after his own mother was no longer around.

Celia is first seen in flashback telling Thomas to cover up lest he get sunburn. She shows no like for Victor Strand, who she sees as an interloper, and possible because her son told her how Strand meet Thomas (i.e. Thomas being the victim of Strands money theft scheme).

The first time she appears out of flashback in in Sicut Cervus, where she greets Victor at the gates of the estate and learns the fate of her son, who she is convinced will return. She also (unseen and at the very beginning of the episode) poisons the local Priest and his congreagation.

It is later revealed that she and the staff keep infected housed and fed in the wine cellar, and that she is not worried about Thomas' infection. This is revealed as her near religiously held belief that the infected are not dead but just in another stage of life. She chats with Nicholas Clark, where her warm, motherly approach wins him over to her belief system.

Later, she is angry at Victor for shooting Thomas. She believed that Victor murdered Thomas because Victor prevented him from reanimating. She angrily slaps him and raises her hand to slap him again, but she is stopped by Madison Clark.

In order to get Madison to see her point of view, they go to the wine cellar together, where Celia refers to the infected as her "children." She then unlocks the gate and enters the cellar, while Madison locks the gate behind her. She does not seem concerned by this development, despite being trapped with the Infected, who were now approaching her.

The building and cellar were then destroyed in a fire which was set by Daniel Salazar. Its assumed that she died in the fire since she was never seen coming out of the mansion but this has not been confirmed.

Celia is presented as a warm, maternal figure to all she meets. Her religious beliefs give her a calm, almost "zen" outlook at what is happening to the world. However, she can be cruel and cold blooded when the need arises. She kills the local Priest and his congregation because they were coming after her (in retaliation for the herd of infected she kept in the wine cellar). She also banished Strand and his group from the compound knowing it meant certain death for them, because Strand shot Thomas- the love of his life- in the head, rather than let him reanimate. According to Strand, she is also manipulative, seeking out those with either weak personalities or addictions (such as Nick Clarke), in order to exploite them. 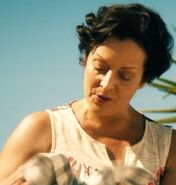 Retrieved from "https://fearthewalkingdead.fandom.com/wiki/Celia_Flores?oldid=29797"
Community content is available under CC-BY-SA unless otherwise noted.