The California Highway Patrol is the law enforcement agency responsible for patrolling the highways in the state of California.

The California Highway Patrol is the law enforcement agency responsibility for patrolling the highways of California. It has the ability to be the State Police where needed. Members of the Highway Patrol were among the first respoders during the early days of the outbreak.

In Season 1, the highway patrol was involved in an incident on the highway relating to a crash that was witnessed by Madison and Travis. One of the victims was infected, died and reanimated. He then proceeded to attack the paramedics who were attending him. The highway patrol the proceeded to try and subdue him with their batons. When this failed, they started using firearms. They shot him several times in the chest, but to no effect. The victim kept getting back up. Finally, one officer got lucky and scored a head shot. 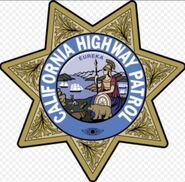 Seal and Badge of the Highway Patrol

Shoulder Patch of the Highway Patrol

Retrieved from "https://fearthewalkingdead.fandom.com/wiki/California_Highway_Patrol?oldid=30166"
Community content is available under CC-BY-SA unless otherwise noted.