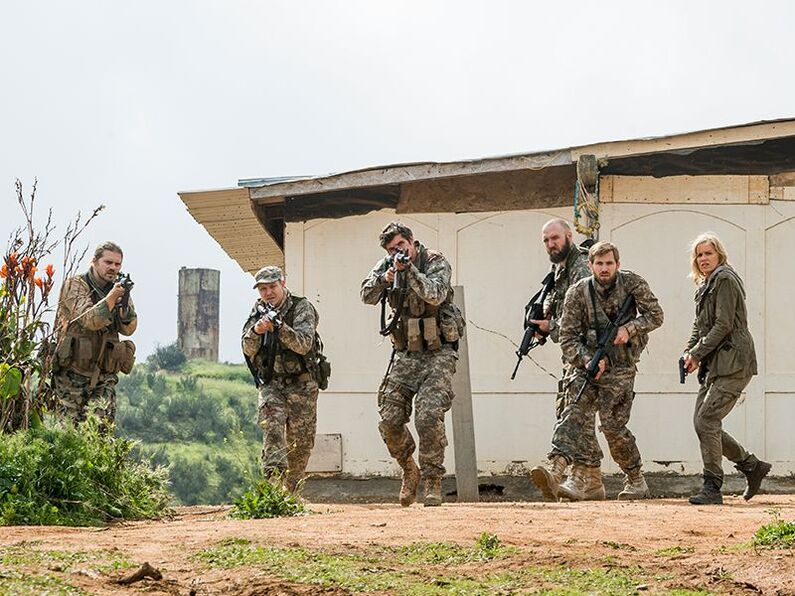 "Burning in Water, Drowning in Flame" is the fifth episode of the Third season of Fear the Walking Dead. It aired on 25th June 2017 on AMC.

We see Nick, watching Russell, an older resident of Broke Jaw Ranch and one of its founders, dancing with his wife, Martha on the porch of their house.

Later, we see Russell wake in the middle of the night to find his wife out of bed. He lights a lantern, and finds that she has died in the night and turned.

Martha has taken her false teeth out before bed and cannot hurt him, and Russell takes her hands and dances with his wife again. Then, he raises a gun to his temple and shoots them both through the head at the same time. The lantern topples over as their bodies fall and the house is set alight.

Seeing the fire, Nick joins the ranchers as they fight to put it out. Seeing that the fire isn't survivable, Otto orders everyone to stop, and save the water.

As Madison's helping to load the vehicles, Coop watches her work and tells her how difficult it will be outside the ranch. He patronises her and calls her "sweetheart", she carries on working and tells him she can cope.

Nick and Alicia try to dissuade Madison from joining Troy on his mission to find the missing team that went to investigate the downed chopper. Madison ignores their advice.

She leaves with the group, travelling in the front of the lead vehicle with Troy.

Jake and Alicia flirt at breakfast. Gretchen tells Alicia that Russell was one of the ranch’s founding members, along with her father, Russel, and Phil McCarthy.

Nick brings breakfast to Luciana in their bunkhouse. She wants leave the ranch immediately and find people she knows. Nick hesitates, but relents and promises to leave with her once she's healthy enough to travel.

Daniel and Strand sit in Strand's car, waiting as a herd crosses the road ahead. Strand warns Daniel to prepare himself in case Ofelia is no longer at the hotel when they arrive. Daniel's suspicion of Strand grows and he orders him to drive through the herd.

Alicia visits Jake at the Otto house. She is thinking about her plans from before the world ended; they talk for a while, kiss, and have sex.

From the car, Troy spots some infected by a crashed prison bus on the side of the road and orders his team to kill the Infected that are gathered around it. One of the militiamen argues that they should stick to their mission, but Madison agrees with Troy that the infected should taken out in case they become a hazard later.

Nick visits the ruins of Russell's home and finds a photo of Russell and Martha.

Alicia gets dressed after having sex with Jake. They discuss books, and Jake offers to loan her his favorite, a Charles Bukowski novel. She explains that she used to enjoy poetry and art, but no longer sees the point of anything like that now.

Nick starts to clean and rebuild Russell and Martha's house. Jeremiah watches his efforts, then decides to pitch in. Among the ruins, Otto comes upon Russell's gun. Jeremiah marvels at the gun and calls it a beautiful tool, but Nick is leery of the gun and all it represents.

Troy's team arrives at the helicopter crash site and discover that whoever shot it down has dragged it away. They find shells from a gun owned by Phil and deduce that Phil engaged the assailants before retreating to his outpost.

Troy’s team drives to the outpost. On the way, Troy and Madison talk about those they have lost. Madison confides that seeing the place where Travis died has shaken her. She wonders if Troy grieved for his mother after she died. Troy says that he doesn't grieve for the dead.

At a pit stop on the way to the Rosarito Beach Hotel, Daniel asks Strand why he left the hotel. Strand explains that he wanted to broker a deal with Dante for water. Daniel doubts Strand’s story, causing Strand to lash out.

While working on Russell’s house, Otto confides that Troy would have uncontrollable crying fits as a child. In the midst of one of these fits, Otto's wife locked Troy in the basement. Otto and his wife were drunk, and forgot about Troy until the next morning. When he finally let Troy out, Troy wasn't mad, he just apologized to his father.

Nick mentions that Luciana wants him to leave the ranch with her, but Madison wants him to stay. Otto asks Nick what he wants for himself.

Troy’s group arrives at the outpost to find a pile of charred bodies. They discover Phil, partially scalped and babbling nonsensically as a crow pecks at his exposed brain. Horrified, Madison stabs Phil in the head, and insists they leave. Before the militiamen can move, a Native American man named Walker confronts them with his soldiers.

Walker declares that they attacked the outpost to take back the land that rightfully belongs to his people. Walker orders Troy’s soldiers to put down their weapons and remove their boots. Troy's group complies after realizing they are surrounded by snipers. Walker warns them that if they don’t abandon Broke Jaw Ranch they will all die.

Jake takes Alicia to a lake and encourages her to find hope in poetry and art. He insists that there is still beauty in this world.

Daniel and Strand arrive at the hotel only to find the entrance abandoned. Strand assumes that the hotel must have been taken by the Dead. He warns Daniel not to go inside, but he insists they look for Ofelia.

Daniel and Strand enter the hotel and find blood all over the ground. Daniel rings a bell, bringing the Dead upon them. With the dead closing in, Daniel pressures Strand to tell the truth about where Ofelia is. Strand finally admits that she left the hotel while he was still there. The Infected attack Strand. Daniel drives off in the car, abandoning Strand.

Nick takes Luciana on a candlelit picnic inside the ruins of Russel's burnt house. He talks excitedly about rebuilding the house and how beautiful it could be, but Luciana does not look convinced.

Troy's group makes their way back toward the ranch without their shoes and weapons. Madison insists they take a break, but Troy orders his men to keep walking. When Madison challenges him, Troy pulls her aside and says she's not his mother. Madison speculates that Troy’s mother must have hated him. As Troy reels from her words, Madison asks the team if they want to rest. Everyone raises their hands. Troy begrudgingly allows his militia to rest until dawn.

Madison wakes up in the middle of the night to find Troy holding a knife to her neck. She urges him to be a better man. He relents and withdraws the knife.

Nick wakes up to find Luciana gone, he doesn't go looking for her.

The militia trudges down the road with bloody feet toward the ranch.

Luciana makes her way to the border; Alicia jumps into a lake, allowing herself to feel a rush that doesn’t come from killing; Otto joins Nick at Russell's house and gives him the revolver.

The gallery below is automatically generated and contains images in the category "Images from Burning in Water, Drowning in Flame". Images added to that category turn up in the gallery after a short time.

The gallery below is automatically generated and contains images in the categories "Images from Burning in Water, Drowning in Flame" and "Images from behind the scenes". Images added to these categories turn up in the gallery after a short time.

Retrieved from "https://fearthewalkingdead.fandom.com/wiki/Burning_in_Water,_Drowning_in_Flame?oldid=25899"
Community content is available under CC-BY-SA unless otherwise noted.