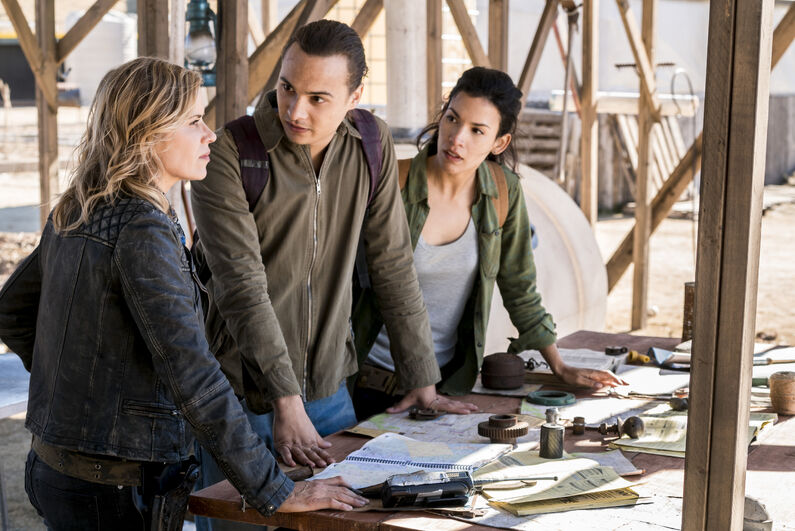 "Buried" is the fourth episode of the fourth season of Fear the Walking Dead. It aired on May 6, 2018 on AMC.

In a flashback, Al videotapes Luciana as she plunges a knife into Nick’s head to keep him from turning. She films Alicia killing an Infected Ennis, and Strand covering Nick’s body with his jacket.

In the SWAT van, Strand informs Al that his group is ready to tell their stories. Al turns on her video camera and asks the group how they ended up in their current situation. Luciana explains that everything traces back to one particular day.

In a flashback, Luciana watches Vultures unload supplies outside the stadium. In the SWAT van, she explains to Al that it had been a couple of weeks since the Vultures’ arrival and rations were getting low.

Nick, Alicia, Strand, Luciana and Cole eat breakfast at the stadium. Madison distributes maps of potential supply locations that the Vultures might have missed.

In the SWAT van, Strand tells Al that their first misstep that day was to go on runs.

Cole pries Strand for details about his life as they search a nursery for plants. Cole asks Strand why he’s afraid of him. They kill a group of Infected together.

Nick and Luciana drive up to a library. Luciana argues that they won’t find any food in the library, but Nick nevertheless goes inside.

In the SWAT van, Luciana tells Al that she went inside because she thought it would be good for Nick.

Nick finds a cat poster inside the library and looks for books. He argues that people need reasons to stay in the community, besides food. Luciana realizes that Nick is thinking about Charlie. She agrees that they should help Charlie but in a different way.

In the SWAT van, Luciana tells Al that Charlie was beyond help. Meanwhile, John chats with Morgan while driving the van. Morgan explains that he will travel alone after he has paid his respects to Nick.

Al tells the group they can stop the story if they’d like, but they continue.

In a flashback, Alicia and Naomi arrive at a water park to search for supplies. Naomi finds a Land Rover but no keys. They spot an abandoned campsite at the top of a waterslide.

Strand warns Cole that he has done questionable things in the past.

Alicia and Naomi climb up a waterslide to reach the abandoned campsite. Alicia finds a machine gun with ammo. Naomi falls down a slide after Infected attack them. Alicia grabs onto the machine gun and falls down the slide. She kills an Infected with the machine gun barrel and narrowly avoids landing in a pool of Infected.

In the SWAT van, Al notices that Alicia kept the machine gun barrel, which now has a jagged point.

Alicia and Naomi find a large stash of medical supplies and stuff them into their packs. Naomi finds keys to the Land Rover and sneaks off while Alicia is distracted.

Strand brings Cole to a secret car and reveals a stash of provisions that he has been stocking for himself as evidence of his duplicity and a reason Cole shouldn't want to know him. He proposes they run off together. Cole recoils from Strand’s offer and drives back to the stadium alone.

Naomi turns the key in the Land Rover but discovers that the gas tank is empty. Alicia catches up and explains that she, too, once tried to strike out on her own. She looks for gas.

Nick kills an Infected in the library. Nearby, Luciana finds a road atlas of the southwestern U.S. She proposes that they pick a random page and then relocate their community to that location.

Luciana tells Al that she should never have opened the road atlas.

Back at the stadium, Mel contacts Madison via walkie and asks if she has any relish as he’s grilling hot dogs. Madison strides over to Mel and tells him that she is still willing to build a community together. Mel scoffs.

Al asks if that was the day that everyone left the stadium.

Nick and Luciana pick a page in the atlas.

Strand sits in the driver’s seat of his escape car.

Cole returns to the stadium. Strand follows in his SUV and reveals his stash of supplies.

Strand tells Al that he never told anyone that he'd hidden the supplies only for himself.

Nick gets an idea while looking at the atlas. He returns to the stadium with Luciana and shows the map to Madison. He suggests they range further north than the Vultures to find seeds and fertilizer to bring back to the stadium. Madison agrees.

Alicia decides not to tell Madison about Naomi’s warning.

At the stadium Naomi tells Madison that, even if the community is a success, conditions are going to get worse before they get better. Nevertheless, Naomi offers to set up an infirmary.

John stops the SWAT van. Alicia’s group gets out to dig a grave for Nick. Eventually, their shovels hit something.

Rather than burying Nick, they had Al bring them to the spot to dig up a cache of guns. They're planning to kill the Vultures. They ask Al to drive them, with the promise of showing her how their story ends. Al agrees.

Alicia’s group buries Nick under a nearby tree then loads the guns into the SWAT van. John recognizes Naomi’s backpack.

In a flashback, Naomi opens her backpack and unwraps a Colt — a twin to the Colt that John owns.

John finds the Colt in the backpack and realizes that Naomi is Laura. Alicia tells him that Laura died at the stadium. Al promises to find out what happened to Laura and report back to John. Morgan stays behind with John as everyone leaves in the van.

The gallery below is automatically generated and contains images in the categories "Images from Buried". Images added to these categories turn up in the gallery after a short time.

Retrieved from "https://fearthewalkingdead.fandom.com/wiki/Buried?oldid=28586"
Community content is available under CC-BY-SA unless otherwise noted.