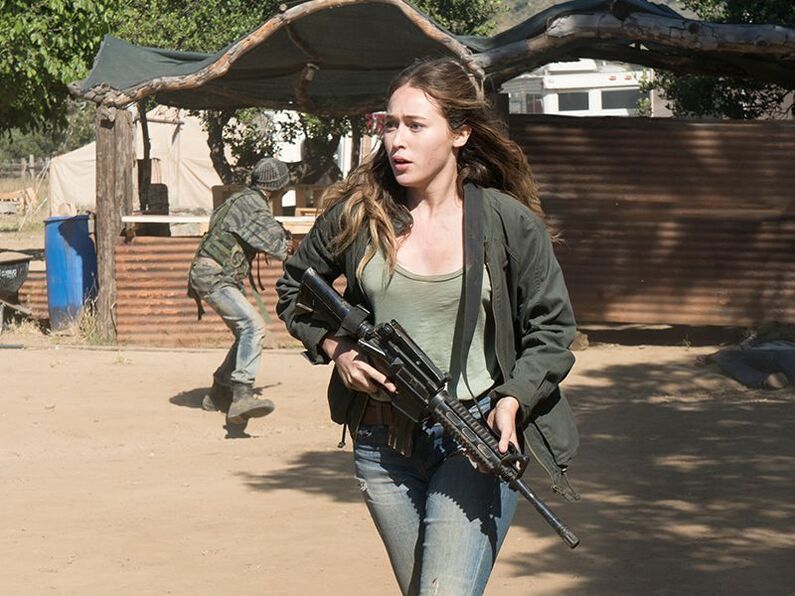 "Brother's Keeper" is the twelfth episode of the third season of Fear the Walking Dead. It aired on 24th September 2017 on AMC.

Far from the dam, we catch up with Troy, who’s miraculously still alive. After eating rattlesnakes and scavenging for supplies (like a grenade launcher), Troy returns to the ranch to warn Nick that the community will soon be obliterated and that he should grab Jake before it all goes to hell.

The next morning Nick tells Jake and Alicia about Troy’s warning and Jake immediately leaves with Nick to find his brother. On the road Jake and Nick encounter a horde of walkers in a nearby valley, where Troy is using the grenade launcher he found to guide them to the ranch. Fresh out of patience, Jake storms down the hill to kill Troy but Nick begs him to talk it out instead.

Troy marvels at the horde and shoots off another grenade, which can be heard in the ranch. Jake pins him to the ground and holds a gun to his head. Troy reveals it was Nick who killed his father but Jake said it doesn’t matter. He prepares to shoot Troy again until Nick pistol whips him and he rolls down the hill. A walker takes a huge bite out of Jake’s arm, causing Nick and Troy to rush down and kill the infected. Jake begs them to cut his arm off and they do.

Back at the ranch Alicia warns the others of the impending horde and Lee agrees to arm the community. The infected arrive in mass and the community, which trapped behind a wall of RVs, attack the ones that slip through. Nick watches the attack from afar and Troy breaks the news that Jake died from the infected bite.

The walkers topple over one of the RVs, forcing everyone to fend for themselves. Alicia instructs the innocent to head to the pantry while she and the militia attempt to thin the herd. She remains idle as one rancher is eaten while another, Coop, is consumed by the infected. She only acts when she shoots him to put him out of his misery. She finally wakes up and shoots off the walker attacking Ofelia. She, Ofelia, and Lee take out the infected one by one but are quickly overwhelmed. They miraculously escape to the underground pantry, where a horrified community awaits their next instruction. Nearby Jake turns and Troy’s forced to kill him, again.

Please add to, and correct this plot section

Troy kills a rattlesnake with a knife, and lpays with the rattle before cooking and eating the body.

He writes in a journal afterwards and looks at his handgun, with a single round in the breech and no magazine, and puts it away.

He's where Phil and his men were attacked by the Nation, Phil is still where he was left, seated in the chair.

In a barn, Troy finds some tinned food and and eats it, in the house he examines a sampler that says "God Help Those Who Help Themselves" instead of the more more usual "God *Helps* those". It turns out to conceal a weapon and ammunition, a flare gun.

He buries Phil, finishing in the dark and writing more in his journal

Troy sits in Phil's chair and seems to be thinking about killing himself, a noise makes him stand and turn. He fires the single shot from the handgun into the air, and smiles.

Nick watches infected being put down by Ranchers, Nick puts down the cattle rather than let them die of thirst

Jake and Alicia talk about putting down the herd except for the milking cows, she reassures him. Tells him that they can survive, he talks about "prepper central", in the pacific northwest, Alicia tells him that's a long trip, and he talks about a much closer place, a cabin near the border with game enough to hunt, he wants to take just her there but she wants to stay.

Ofelia eats with Crazy Dog, he's distracted, they haven't found water in the well they dug. They talk about the lack of effective leadership of the Ranchers, how weak Jake is, and they talk about Nick filling that void.

Nick looks out over the ranch from the Otto house balcony. Alicia asks him about the steak he left. She takes a cigarette, he talks about killing Otto and how he's worried about Jake - and Troy.

She tells him not to feel guilty about exiling Troy, that Troy deserves it for all of the killing, he says that maybr he's a sick as Troy is.

At night, lying awake in bed Nick hears a noise. Gets up with knife and goes outside on the balcony but no one seems to be there, lights a cigarette.

Troy speaks from behind him. They talk, Nick says he's glad Troy is alive. Troy says he's there to save Nick, because Nick had saved him. He says he's brought something huge from the desert. Nick doesn't understand and says Troy can either go now or rest for a couple of days. Troy turns down Nick's offer of help and locks him out on the balcony, he tells Nick the ranch is about to be destroyed and disappears inside. Nick runs to find another way in.

In Madison's hut, Jake and Alicia are talking about digging another well, and about Madison and Walker being out of touch and overdue. She wants to stay, he wants to go.

He asks what she's fighting for, why she looked after him, asks if this is a relationship or an alliance

Nick arrives, saying Troy was there with his warning, Jake goes after him, nick goes with him. She answers his question, tells him he's the last good man she knows.

Jake and Nick on road to find Troy, Nick says Troy didn't kill or hurt anyone. Jake talks about finding Troy's practise kills in the desert, says they have to put him down. Dust in distance. horde, he radios Alicia and they try to lead them away using the vehicle - they see Troy

Jake falls near an infected and gets bitten before Troy and Nick can get to him. Nick cuts off his arm.

Nick drives on way back to Ranch, passing the herd. Jake dies on the way back. Alicia's not answering the radio. Troy puts off putting his brother down to stop him from turning and asks Nick to kill him, but Nick refuses,

At The Ranch Edit

Alicia tell Ofelia about the horde, and about Troy. Alicia asks her to have faith - Ofelia looks doubtful.

Alicia and everyone else at the ranch see the herd. They question Alicia about the herd and about where Jake is. Ofelia gets the keys from Crazy Dog so that the ranchers can be armed.

The Ranchers circle the RVs to deflect the herd.

The herd approach the ranch and the ranchers and Nation hide behind the RVs, the push the gates open and swarm through the camp, rocking the RVs and crawling under them.

The RVs start to give way and Alicia orders everyone to shelter in the pantry, but no one really moves. The fighting becomes hand to hand as the infected break through and Alicia can't save a woman who's calling to her for help. Ofelia persuades Alicia to lead them to the pantry. Alicia again shouts for everyone to get to safety and they run.

Coop is overwhelmed and can't kill himself because he's out of ammunition, he looks at Alicia, asking her to kill him and she does - shooting him in the head. She also kills an infected man attacking Ofelia and they both woman run for the pantry.

Alicia, Crazy Dog and Ofelia fight their way through the herd, making it to the pantry and shutting the doors; they are the last to get in.

Jake turns and attacks his brother who puts him down, eventually, as Nick watches. He tells Troy that now they have to find a way to save everyone. From where they are they can see that The Ranch is completely overrun.

Everyone left alive at the Ranch is now in the pantry, awaiting events.

The gallery below is automatically generated and contains images in the category "Images from Brother's Keeper". Images added to that category turn up in the gallery after a short time.

The gallery below is automatically generated and contains behind the scenes images from Brother's Keeper". Images added to that category turn up in the gallery after a short time.

Retrieved from "https://fearthewalkingdead.fandom.com/wiki/Brother%27s_Keeper?oldid=26159"
Community content is available under CC-BY-SA unless otherwise noted.