Beaten to death by Travis Manawa
Later put down by Madison Clark after reanimation.

Shot in the head by Brandon Luke

Beaten to death by Travis, then stabbed in the ear by Madison Clark before reanimation.

Brandon's Group is a group of young men from San Diego. Initially the group was made up of Brandon, Derek, James McCallister and Troy; they were on holiday in Mexico when the border closed and then the country fell. Brandon is the leader of the group.

They tell Chris and Travis that the first of the Infected they saw looked as if he'd had too much to drink, so they call them "The Wasted". They also say the first one "took out one of our bros". This turned out to be Troy who was killed by James after being bitten by one of The Infected

This group first appear in the Season 2b episode "Do Not Disturb".

Brandon's group are first encountered by Chris. Chris enters a roadside cafe, Magana's Tacos Restaurant, and hears voices. He also sees two recently dead, still bleeding, bodies behind the counter. The clear implication is that the owners of the voices have killed the owners of the roadside cafe - that we've just seen on the floor. This isn't made explicit though.

Chris is quickly packing away some food he sees on the counter when he's surprised by some Infected coming in the door. He puts down the first one and Brandon comes out to investigate. He's distracted by seeing Chris and doesn't see an Infected attacking him - Chris does though and instinctively puts the Infected down, saving Brandon's life. Chris makes his getaway, back to his father outside, and Brandon watches them drive off.

That night the young men find Travis and Chris by the road. Chris is much more taken with them than his father. Travis does accept a lift from them and they find the Suarez Farm together.

In the episode "Date of Death" Brandon shoots James in the head a week after he was shot because he's not healing fast enough and has become a burden. Before he's killed James tells Travis about Troy, the friend of their's that died. He admits to Travis that he killed Troy because he was sick from an Infected bite.

Chris goes with Brandon and Derek, leaving Travis at the farm.

At the end of "Date of Death", Brandon and Derek arrive at the gates of the Rosarito Beach Hotel on foot, at night, and without Chris.

Travis later learns of Brandon and Derek residing at the hotel and proceeds to question them after chasing down Madison, Elena, Oscar and Hector who are leading them to safety. After originally maintaining they wrecked and Chris died on impact, he notices a flaw in their story and they admit to killing him. Travis then snaps in a fit of rage, beating both of them to death although Derek temporarily fends him off by hitting him in the back with a chair and kicking him. 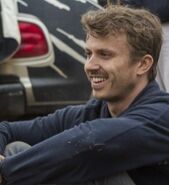